The murder of cab driver Derek Roth, which took place in Herzliya in 1994, shocked the nation because of the utter randomness of the crime. 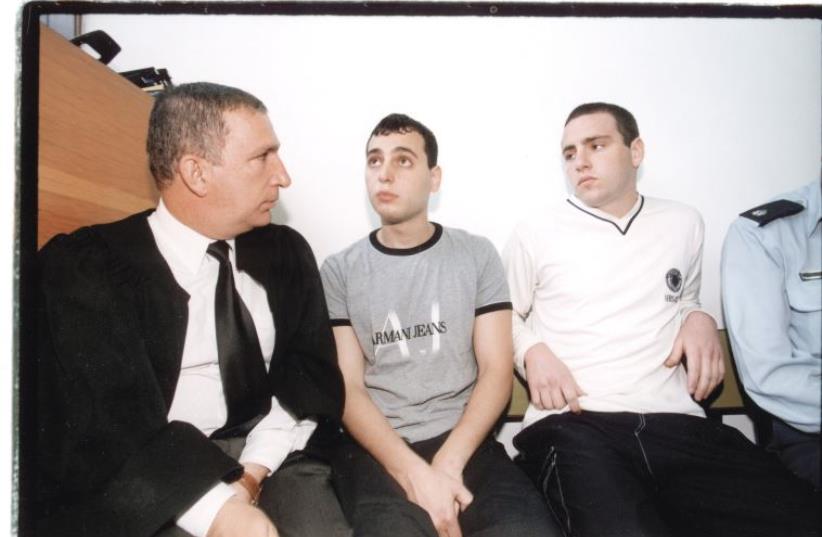 Arbel Aloni (right).
(photo credit: BARKAI WOLFSON)
Advertisement
A man who carried out a random murder of a Herzliya cab driver as a teenager was released from prison on Wednesday, over two decades after a killing that shocked the nation.Arbel Aloni, now 35, walked out of Rimonim Prison, near Netanya, on Wednesday after serving 16 years for the 1994 murder of cab driver Derek Roth. Aloni also served five years for the armed robbery of a convenience store that he and an accomplice in the murder, Moshe Ben-Ivgi, carried out while on a furlough in 1998.Aloni also served a further six months for credit card fraud. He had appealed to authorities to receive a shortened sentence on grounds of good behavior but was refused.Derek and Gila Roth Aloni was surrounded by several private security guards as he walked out of prison on Wednesday, and sped away in a waiting SUV without speaking to waiting reporters. He will return to his wife, Avigail Sharon- Koren, whom he married in 2005, and their two children.On January 9, 1994, Aloni and Ben-Ivgi – both 14 at the time – hailed a cab in Herzliya Pituah near seaside hotels. Shortly after entering Roth’s cab, they shot him several times in the back and then fled. To this day, police have failed to learn which of the two pulled the trigger.Later that same year, they were convicted of the crime which horrified the nation because of the young age of the killers and the senselessness of the crime.They were sentenced to 16 years in prison, and in 1998 were rearrested and sentenced to a further five years after committing an armed robbery on a convenience store while on furlough, during which they stabbed the elderly cashier in the hand.Despite the armed robbery, Ben-Ivgi was given another furlough in May 2004, during which he fled to Argentina using a fake passport. In November 2013, however, he was repatriated to Israel after being arrested by Argentinean authorities in November 2004 and following a lengthy legal process.Ben Ivgi is stated to be released in three years.