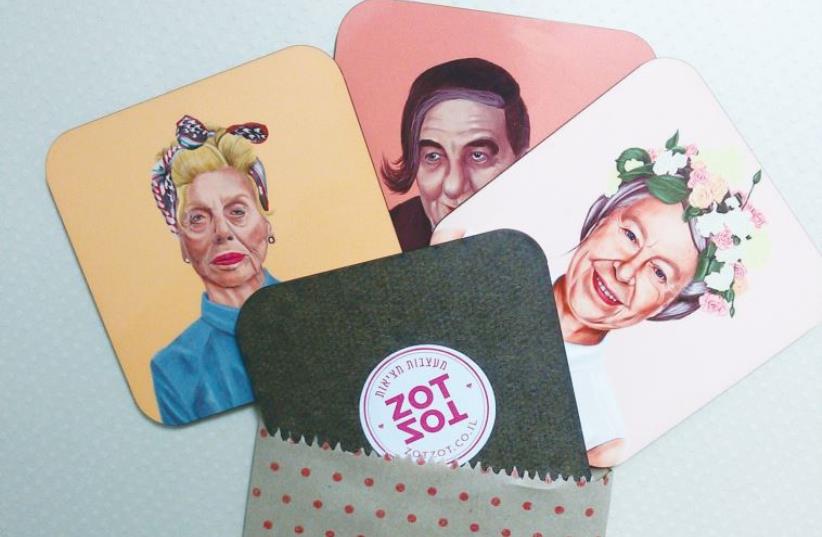 THIS SAMPLING of celebrity coasters is one of the popular Amit Shimoni creations offered for sale by ZOTZOT.
(photo credit: Courtesy)
Advertisement
A hipster Ariel Sharon in a hoodie and a blond, blowdried hairdo stares up from the desk in this little workshop tucked into the basement of a multi-story home in the Tel Aviv suburb of Azor.He’s joined by old political rivals Yitzhak Rabin and Shimon Peres, both decked out like they were plucked moments earlier from a café in Florentin – along with Yitzhak Shamir, who, even in a tank top with fake tattoos, still looks the grim hard-liner he always was.The coasters, magnet, and bumper stickers are the brainchild of Israeli artist Amit Shimoni, and in recent months much of his artwork has been printed by this small printing press, where seeing the likes of David Ben-Gurion decked out like a hipster is probably the least remarkable thing.The basement is home to ZOTZOT, a “social printing studio” staffed by female former inmates of the Prisons Service. The workshop is part of the wider organization Ze.Ze, which brings together “a community of makers, creating various attractive social projects,” according to the group’s Facebook page.The manager of the studio, Shlomit Leibovich, says she sees the ZOTZOT endeavor as part of the “fourth sector” – not a charity, not a public or governmental organization, and not solely a private business without a social component.The fourth component seeks to blend a business model with social and environmental aims.The studio works on two main avenues – they print works for artists like Amit Shimoni, which are then promoted and sold on the ZOTZOT website, with a percentage of the sales sent to the artist.The other revenue stream is by custom-printing a number of items from cellphone covers to mouse pads to bags to coffee mugs for private companies for use as promotional items, employee gift bags, and the like.Leibovich – not a former prisoner – joined the studio three months ago after working for the charity “Machshava Tova” and said that their goal is to be a business that succeeds on its own based on the quality of its work, not due to the charity or generosity of others.“We don’t want people to buy because they feel sorry for us or out of pity, we’re a business and we want to succeed as a business,” Leibovich said, though she added, “it’s very hard to be a small business in Israel, even harder to be a social company.”The theme appears to be one of empowerment, not one of pity. That through work where they are able to create products to be proud of and which can succeed on their own merits, these women can make an easier transition to life outside of prison.Former inmate Ronit (who asked her last name not be given) served 19 months of a 42-month sentence for drug dealing and is today the most veteran employee at the studio.She and a group of 13 women then took a course on Photoshop and graphic design, and were employed by the program when it launched in September 2013.They eventually moved to the halfway house in Azor when the entire prisoner rehabilitation authority complex was transferred from Tel Aviv to the suburb last March.Ronit, now a shift manager at the workshop, said there is a lack of positive employment options after prison, and that for the most part female parolees can only find monotonous, menial jobs like janitorial work or stocking shelves in grocery stores.As Ronit puts it, female parolees face a much harder time on the outside than their male counterparts.“The world doesn’t accept a female prisoner. They’ll accept a man going to prison, that makes sense, there’s an expectation. But a woman? What’s a woman doing in prison, they ask,” Ronit said.And though while a father is incarcerated a single mother is expected to keep the family together, when the mother goes to prison, the family is often much more in dire straits, she adds.The only female prison in Israel is Neve Tirza in Ramle, home to a little more than 200 inmates out of an overall population of more than 10,000 inmates in the Prisons Service. The majority of the women are mothers, further complicating the difficulty of being behind bars.When women are released, just like their male counterparts, they can face a number of restrictions on where they are allowed to work. Former inmates who served time for fraud are banned from working with money or invalids who can be taken advantage of, and wherever they look for work, they can find the doors closing in their faces when they disclose that they served time.“There are a lot of minuses to being a released prisoner and this is part of what drove us to open this place. Here the women don’t need to wear a mask; here everyone knows who they are,” said Ronit.