‘I just don’t want Le Pen to take my passport,’ says one voter 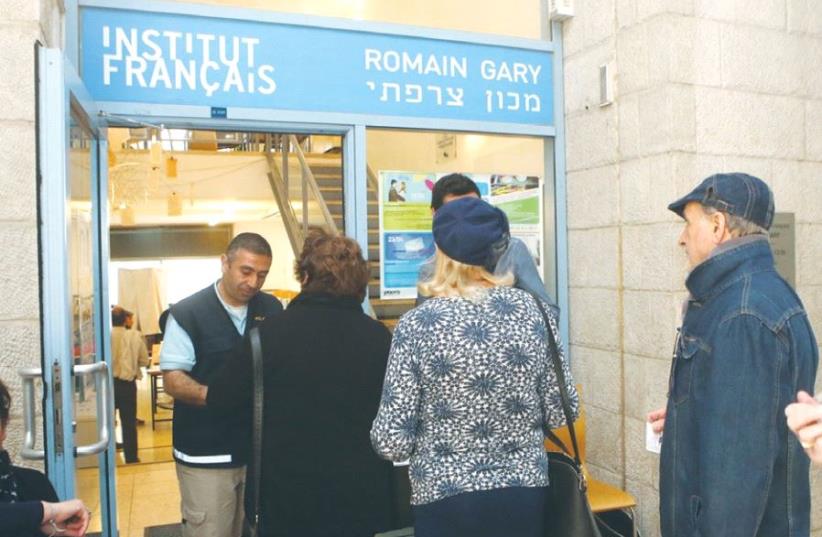 VOTERS STAND in line at the French Institute in Tel Aviv yesterday.
(photo credit: MARC ISRAEL SELLEM)
Advertisement
Hundreds of French-Israelis waited for hours to vote in Tel Aviv on Sunday, hoping to have their voices heard in France’s most contested election in recent memory.“The most important issue is first of all to stop the extremist Left and the extremist Right, and second of all to vote favorable for Jews and for Israel,” said Gerar Schekler, 64, while waiting in the large line that snaked around the French Consulate on Ben Yehuda Street in the coastal city.Schekler is a supporter of the 39-year-old Emmanuel Macron, a center-left presidential candidate and former economy minister who has never held elected office. “It’s a very difficult to say who is the best, because nobody is ideal.[François] Fillon has a problem of corruption with his wife and children, and Macron seems like a brilliant man, but he has no proven experience, but in my opinion Macron is the best hope for France.”Many French Jews who tend to vote for the conservative The Republicans party are expected to vote for center-right candidate and former prime minister Fillon, despite his low polling numbers in France due to allegations of corruption.Israel has approximately 80,000 French registered voters, although well over 200,000 French citizens live in Israel.
French citizens in Israel vote in France presidential election (credit: REUTERS)
“Experience sometimes is not such a good thing,” said Fiorella, a recent immigrant in her 50s and another Macron supporter. “The world has changed and a lot of governments are being governed by 70- or 80-year-old people. It’s good to get a fresh outlook.”Fiorella like others in the crowd railed against “uncontrolled immigration” that is “changing the face of Europe,” but she is still not for the hardline anti-immigration policies of National Front leader Marine Le Pen, which she views as extremist.While there are likely Le Pen voters in the mix of French-Israelis, there was an apparent air of disdain in Tel Aviv for the far-right leader, who is predicted to make it to the second stage of the French election, a runoff election between the top two vote getters on May 7.“I think this is primarily a vote against Le Pen,” said Daniel, 62, who would not state who he was voting for except that it was “definitely not Le Pen.”There was more anti-Le Pen sentiment to be heard. “She is just like her father,” one older woman said in reference to Le Pen’s father, Jean-Marie, a convicted Holocaust denier. “She wants to erase us,” another woman said.“I don’t know a lot about the politics, I just don’t want her to take my passport,” French-Israel Eden Levine, a Macron supporter in her 20s, said in reference to Le Pen’s proposal to abolish dual citizenship with countries outside Europe and ask French-Israelis to “choose their nationality.”While not as visceral, some voters who spoke with The Jerusalem Post expressed disdain for far-left candidate Jean- Luc Mélenchon, and several people echoed the sentiment of “saving” France from the “extreme-left and extremeright parties.”Schekler, the Macron supporter, said that he doesn’t believe Le Pen has a real chance of winning. “I don’t think so,” Schekler said, adding after a few seconds, “but we can all be surprised.”