The statue fragment was probably made in the Egyptian art style common during the Late Bronze Age, approximately 3,500 years ago. 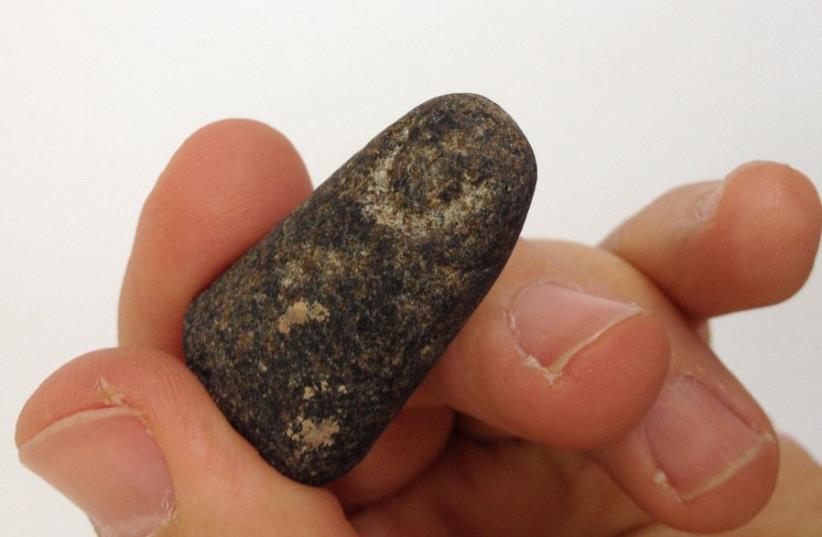 Stone finger from ancient Egyptian statue , uncovered in Jerusalem
(photo credit: COURTESY OF TEMPLE MOUNT SIFTING PROJECT)
Advertisement
A fragment from a mysterious life-sized pinky finger from an ancient Egyptian statue has been discovered by the Temple Mount Sifting Project.The find comes one week after the project announced it lost government funding, and would have to cease operations.“This is a fragment of a lifesize statue, which was made in Egypt and imported to Canaan,” said co-founder and co-director, Gabriel Barkay, on Thursday.
Discovery of cruasder-era floor tile in April 2016 (credit: TEMPLE MOUNT SIFTING PROJECT)
“We clearly see that this is part of a pinky finger measuring 3.5 cm., from a man’s hand, which also includes a fingernail. The statue is made of a hard black stone originating in Egypt. The statue most likely represented a figure of a god or king. The black stone from which the statue is manufactured testifies to its Egyptian origin.”Although the identification and dating are not yet finalized, Barkay said the statue fragment was probably made in the Egyptian art style common during the Late Bronze Age, approximately 3,500 years ago.The Temple Mount Sifting Project has yielded additional artifacts which were imported from Egypt, or manufactured under Egyptian influence.Among them is an additional statue fragment of a man’s shoulder, scarabs (amulets shaped like dung beetles), seal impressions, and Egyptian- style jewelry all dating to the Late Bronze Age.“Ancient Egypt ruled over the Land of Israel during the second half of the 2nd millennium BCE, the days of the Egyptian New Kingdom, and during the 18th, 19th and 20th dynasties,” said Barkay. “Jerusalem is known to have been a semi-autonomous city-state, located in the Egyptian province of Canaan.”The finger fragment found by the project is being analyzed by a team of experts to determine its exact date of origin.In the meantime, the Temple Mount Sifting Project launched a crowdfunding campaign last week to raise money to keep it operational.Zachi Dvira, co-founder and co-director of the project, said half of the full sum needed for funding the annual research was raised within the first three days of the campaign.“We hope that the public, recognizing the great significance of the project, will continue to support us in the future,” he said.According to Barkay, a government meeting has been scheduled after Passover to resolve the matter in order to resume the sifting.