"The Holy Land is the only place in the world you can visit with a Bible as a guidebook."

Photographer Enrico Formica presents his new book "Terra Sancta", published in honor of the 130th anniversary of the Notre Dame piligrim center in Jerusalem September 13, 2018
(photo credit: JULIANE HELMHOLD)
Advertisement
The historical guesthouse Notre Dame of Jerusalem Center commemorated its 130th year of welcoming pilgrims to the Holy Land with the publication of the book Terra Sancta, which depicts well-known holy sites in Israel from a completely new angle (in fact, a 360-degree angle.)The book, which includes pictures by Enrico Formica, one of Europe’s pioneers in the field of 360-degree photography, alongside text by renowned Franciscan Scholar Fr. Eugenio Alliata, was officially released on Thursday before the diplomatic corps, religious Christian authorities and the media against the stunning backdrop of the Old City of Jerusalem.Formica’s technique of shooting spherical images was developed by the photographer himself, using special equipment and technological tools to capture a 360-degree view in one single frame, without need of any subsequent editing or modification. 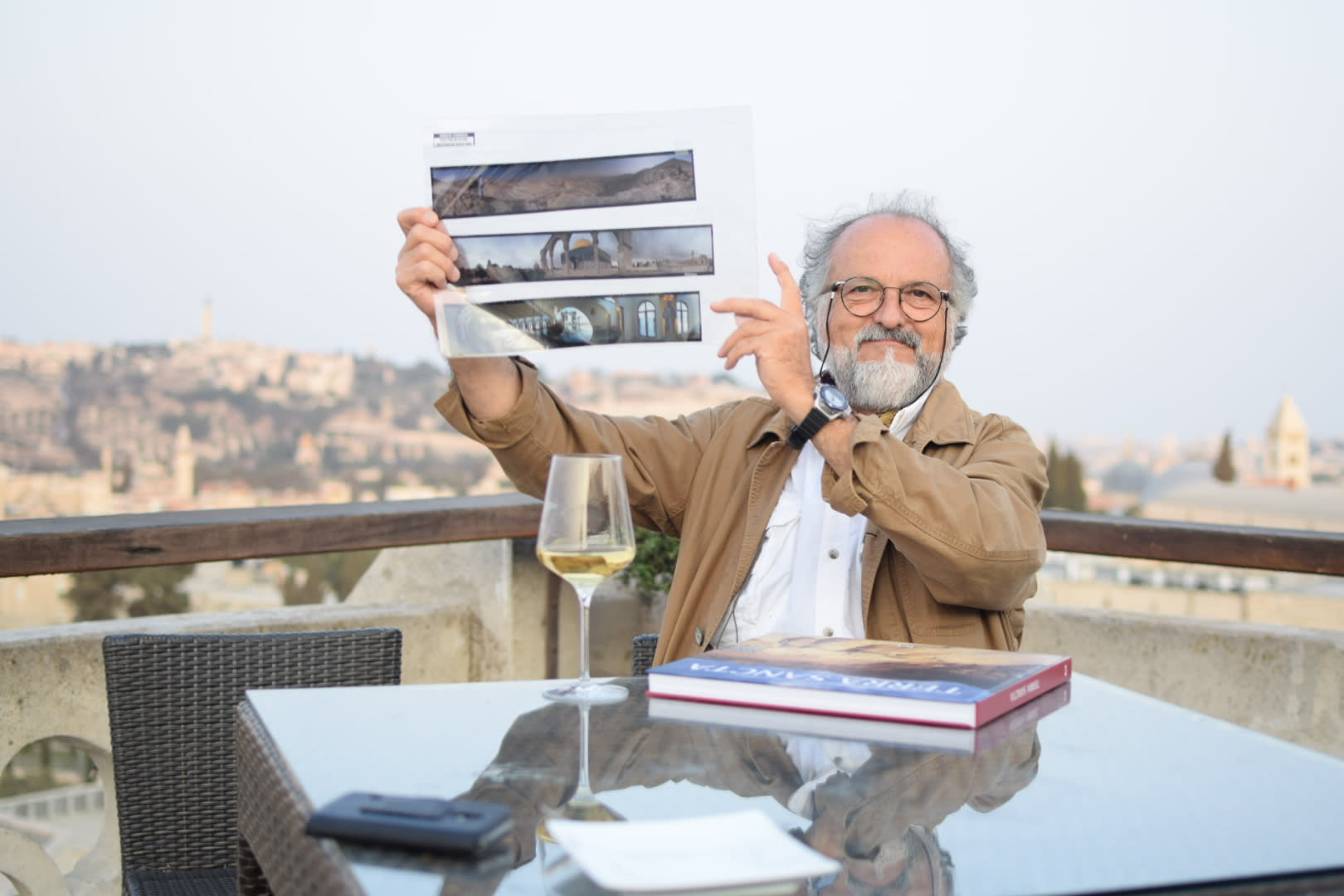 Photographer Enrico Formica presents his new book "Terra Sancta", published in honor of the 130th anniversary of the Notre Dame piligrim center in Jerusalem September 13, 2018 (Juliane Helmhold)
The artist, who started his career as a graphic designer, hyper-realist painter and illustrator, also founded his own publishing house to take full charge of all editorial decisions and to succeed in retaining every image’s original charm. He has published more than 280 works.The 215-page Terra Sancta takes the observer on spiritual and visual journey from the Jordan River up the Sea of Galilee, along the Via Maris to the heart of the Holy Land, Jerusalem, and via the Caravan Route to the lowest point on earth, the Dead Sea.“To be part of a center that commemorates 130 years of serving pilgrims in this part of the world, is amazing. Not only because of the richness and history that are housed within this place and its grounds, but also because serving God where everything began is priceless,” Father Juan Solana, the Chargé of the Holy See for Notre Dame of Jerusalem Center emphasized as he introduced the publication.“We are releasing this photo-book today honoring the history of the people, cultures, and sites that have received pilgrims in this beautiful land.”The Notre Dame of Jerusalem Center, which today consists of a guesthouse, chapel, auditorium and an education and training center, provides stunning views of the Old City from its rooftop terrace as well as an outstanding culinary experience and beautifully designed rooms. 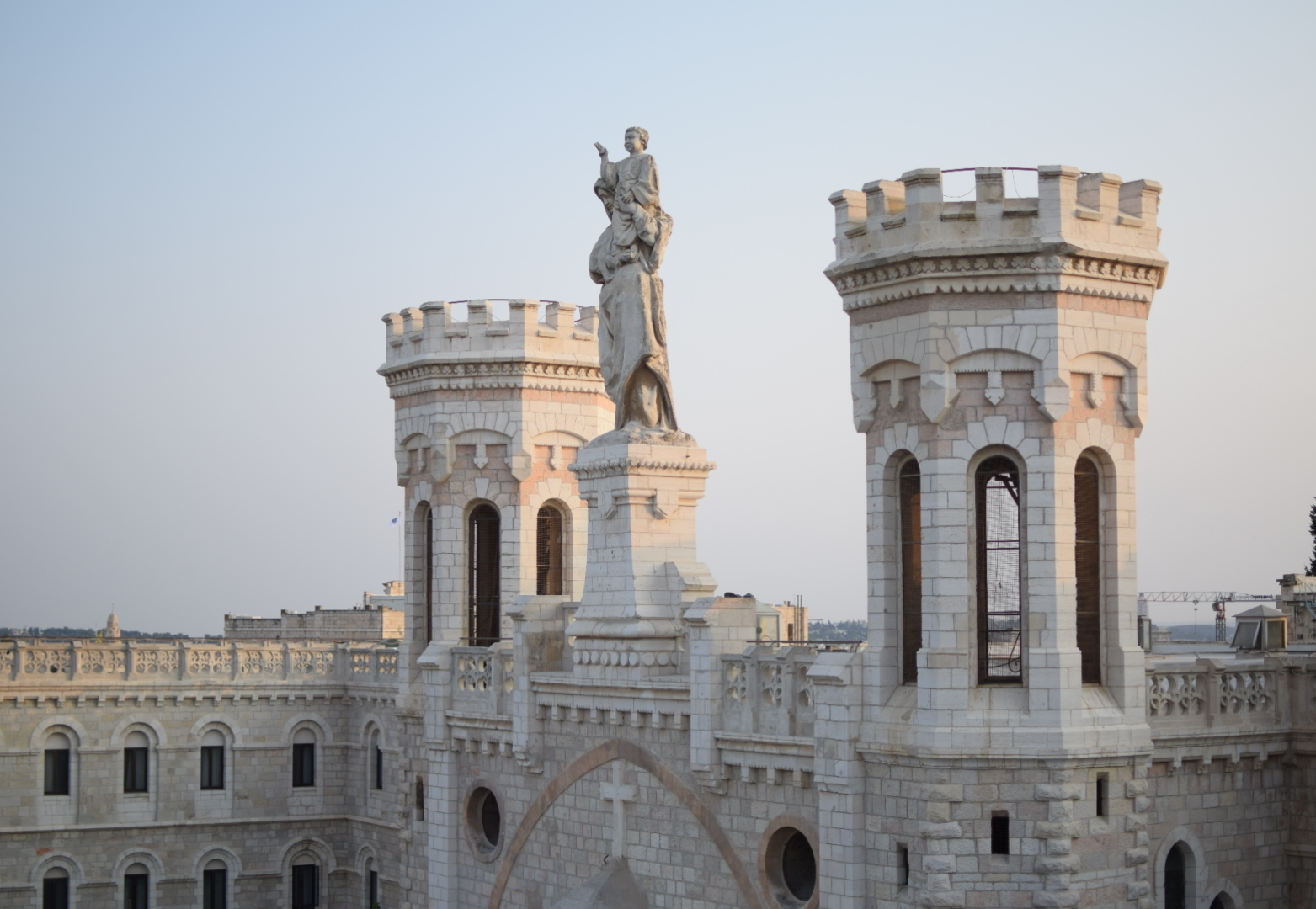 A view of the Notre Dame pilgrim center on its 130th anniversary September 13, 2018 (Juliane Helmhold)Beyond fulfilling every physical need of its guests, the pilgrim house also offers regular services which enable the visitor to experience the profound spiritual atmosphere in the Holy Land.As an integral part of Israel’s Christian history, the Notre Dame of Jerusalem dates back to 1882 when the property was purchased under the direction of French religious order the Augustinians of the Assumption.In 1888, even before the building was finished, the first pilgrims arrived from France, instituting a tradition which brought about 500 French pilgrims each year.After the structure was damaged in the 1948 war, it was acquired by the Vatican in 1972, restored, and subsequently entrusted to the Legionaries of Christ by Pope John Paul II in 2004.
“We will continue improving our mission of serving and welcoming pilgrims, ministering the local Christian community, training local youth in hospitality and tourism in hopes to offer them opportunities for a better future, fostering peace and dialogue among cultures and peoples, as was entrusted to us by the pope,” Father Solana, originally from Mexico, concluded.