While in Israel Miller will also visit the Tomb of the Patriarchs in Hebron, the Dead Sea and the Temple Mount in Jerusalem. 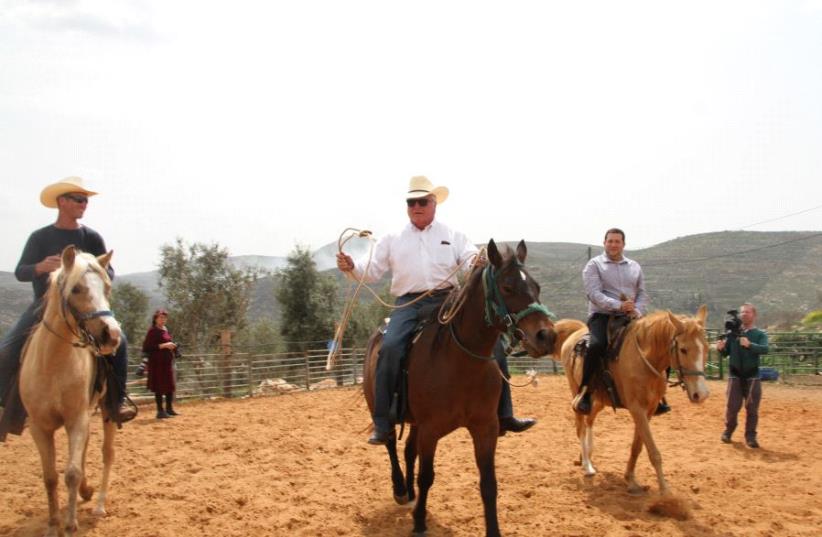 Republican Texas Trade Commissioner Sid Miller and Samaria Regional Council head Yossi Dagan
(photo credit: COURTESY OF SID MILLER)
Advertisement
For a pro-Trump Texas maverick, nothing says “I love you” more than visiting a West Bank outpost and signing the first trade agreement between the Lone Star State and the biblical heartland of Samaria.Wearing a large cowboy hat, Republican Texas Trade Commissioner Sid Miller on Thursday visited the Itamar settlement, including the nearby organic farm called Givat Olam.“I’m here in the Shomron – Israel – to create a revived Texas-Israel exchange,” Miller said as he stood in a horse corral along with Samaria Regional Council head Yossi Dagan, who organized the trip.
Texas Agriculture Commissioner Sid Miller and Samaria Regional Council head Yossi Dagan in Itamar in the Samaria region of the West Bank‏ (credit: TOVAH LAZAROFF)
Upon arriving in Israel the day before, Miller said, his trip was also a statement against the Boycott, Divestment and Sanctions movement.“Israel is our strongest ally in the region. Texas needs Israel. The US needs Israel and Israel needs the same cooperation back. I am ashamed to say that we have some in our universities boycotting Israel, so this is to counter that culture,” Miller said.In Itamar he and Dagan played to the camera as they briefly rode horses on the edge of a rocky hilltop. Miller showed Dagan how to turn a rope into a lasso, and twirled it in the air above his head as he sat in the saddle on a trotting horse.Dagan showed Miller a chicken coop, a sheep barn and a vineyard in this pastoral oasis in the middle of a stormy geo-political conflict.Miller, who had been on US President Donald Trump’s short list for secretary of agriculture in January, had no problem carving out his own diplomatic agenda as he stood under the cloudy March sky.American and Israeli officials met this week to come up with an understanding with regard to constrained settlement construction.Settlers fear Netanyahu seeks US permission to build in the settlement blocs, in exchange for a freeze in the isolated settlements like Itamar.It was an option that Miller easily dismissed, even though Trump has spoken of the need to constrain settlement activity. “I think the Jewish community, the Jewish state, needs to reclaim all of its land. I don’t have a problem with that at all. The sooner the better. It has been in dispute for years and years and it will continue to be that way. But my personal opinion is that [the Jewish people] should be able to settle anywhere in the Holy Land if they want to.”He added that this includes Judea and Samaria. Miller will also visit the Tomb of the Patriarchs in Hebron, the Dead Sea and the Temple Mount in Jerusalem.Israel is one of Texas’s top traditional partners, but Miller is looking to strengthen these ties, particularly with respect to agriculture.On Wednesday he visited the Knesset, where the agreement between Texas and the Samaria Regional Council was unveiled publicly in the plenum. It was then signed together with Strategic Affairs Minister Gilad Erdan (Likud).“Israel and Texas share a deep bond based on the values of freedom, democracy and the love of our land. Increasing our economic cooperation will be good for the people of Texas and the people of Israel,” Erdan said.