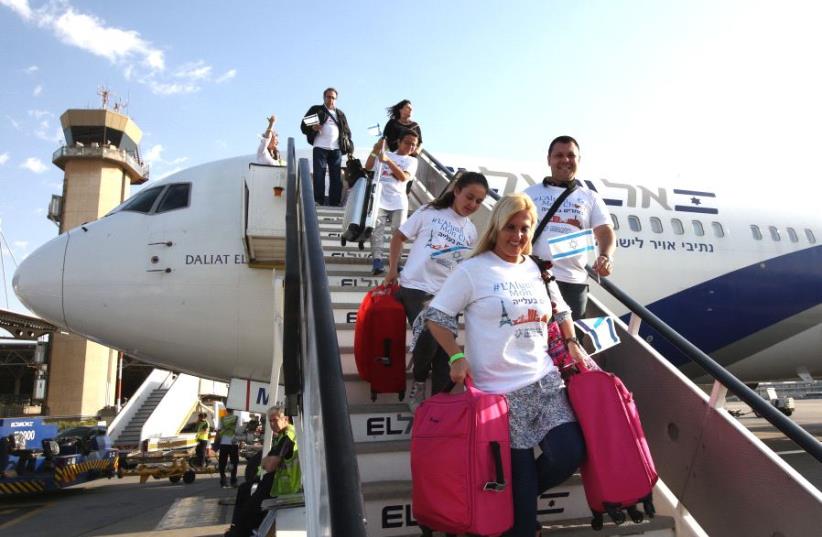 French olim arrive at Ben-Gurion Airport, July 10, 2017
(photo credit: MARC ISRAEL SELLEM/THE JERUSALEM POST)
Advertisement
“I am the representative of over 40,000 new immigrants... if everything was fine, I wouldn’t work here,” LiAmi Lawrence, the head of the KeepOlim immigrant support movement, told a special meeting in the Knesset Committee for Immigration, Absorption and Diaspora Affairs on Monday.“There are 188 families, [of] new immigrants, [that] within two years, left Israel...Someone is not doing their job properly,” he said.The meeting painted a mostly rosy picture of immigration procedures and numbers, including employment and education; Lawrence was among the few dissenters. He praised the work of the Aliyah and Integration Ministry, but said the help provided by them is not enough both for immigrants in the land and those waiting to immigrate.Earlier in the meeting, MK Sofa Landver (Yisrael Beiteinu) and representatives from the ministry emphasized that Israel contains the largest population of Jewish people in the world, with over six million Jewish residents, compared to the United States’ 5.7 million.The remarks were part of a broader panel about immigration to Israel within the last year from both new immigrants and Israeli citizens returning from living abroad, as part of a themed day at the Knesset, focusing on the work of various governmental agencies.Landver, who serves as aliyah and integration minister, also discussed the general amount of immigrants and returning Israeli citizens who came to Israel in 2017, placing special emphasis on the few thousand immigrants from Ukraine.Landver immigrated to Israel from the Soviet Union in 1979.A statement also clarified that 29,228 people immigrated to Israel last year, out of 245,235 in total over the past ten years; 7,239 of them were returning citizens.
The Jerusalem Post follows olim on their journey to Israel (Tamara Zieve, edited by Yocheved Laufer)
A Related Video You May Like:
Of last year’s 6,917 immigrants, around one-fourth of the total number and over 2,000 more than in 2016, settled in the Negev and Galilee regions, which are both regions that the ministry has been focusing on bringing immigrants into.Landver also emphasized that the work of the ministry and the committee needs to focus on helping new immigrants to Israel feel welcomed and accepted when they arrive.“I’ve said more than once,” she said, “in this committee... [that] first of all, you need to prepare the immigrant before he comes to the country... [to prepare him for] where he’ll arrive, who will receive him, who is helping him, what is the absorption process.”Towards the end of her talk, Landver briefly mentioned the Diplomat Hotel situation, saying that the ministry has held discussions with the prime minister and other parties but has yet to reach a definitive solution. In 2014, the United States embassy in Israel bought the hotel, which houses many Russian immigrants; they may lose their housing if a solution is not found by 2020.Alex Kushnir, the ministry’s director- general, gave a presentation on the efforts of the ministry to integrate new immigrants, placing emphasis on the “digital revolution” surrounding immigration procedures, where new immigrants can communicate over the Internet with ministry representatives and can use a multilingual online portal to track their immigration progress and check up on the next steps.The website was presented briefly during the meeting, and appeared to still be under construction; when the site’s language was switched to Russian, some of the section headings on the webpage came up in English.Kushnir’s presentation also revealed that 10,624 immigrants to Israel in 2017, and 2,101 returning citizens, were between the ages of 18 and 35.