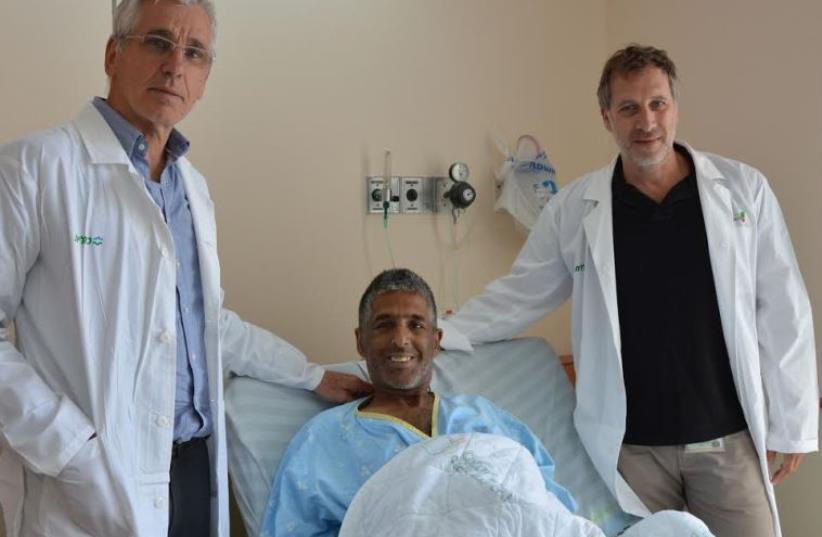 From right, Dr. Evyatar Nesher, deputy head of Beilinson transplant department, kidney recipient, and Prof. Eitan Mor, head of the department
(photo credit: RABIN MEDICAL CENTER)
Advertisement
Most life-saving transplants require the donor to be dead, but that is not the case with kidney transplants.Matnat Chaim (Gift of Life), founded by Rabbi Yeshayahu Haber to encourage more healthy people to donate a kidney to someone in need, has just celebrated the 400th kidney transplant processed through the nonprofit organization.A group of donors and recipients met on Wednesday at the President’s Residence with President Reuven Rivlin and his wife, Nechama, who learned from Haber what it was that had inspired him to establish his organization.Ten years ago, Haber had to leave the yeshiva in which he was teaching because he was almost constantly on dialysis. Happily, he received a kidney donation in time. But a 19-year-old by the name of Pinchas Turgeman who was lying in the next bed was not so lucky. He died before a suitable donor could be found.“On the day that he died, Matnat Chaim was born,” Haber told the Rivlins.What was amazing, he said, was that the majority of people gave a kidney to a total stranger. It was an altruistic act without any reward other than the knowledge that the donor had been instrumental in saving a life.Haber was keen to create greater awareness of Matnat Chaim so that more lives could be saved. Its office is in the capital’s Givat Shaul neighborhood.Dr. Gad Neumann, Deputy CEO at Petah Tikva’s Rabin Medical Center-Beilinson Campus, where the majority of kidney transplants are performed, said that the donation determines the fate of the recipient. Every time he meets a donor or a recipient he said, it is an incredibly emotional experience, he said.Neumann urged more members of the public to come forward and donate a kidney.Sometimes donors and recipients meet after the transplant has proved to be successful – but not always.Nechama Rivlin said she knew of a young woman who had donated a kidney to a dancer, and had opted to remain anonymous. Her joy is in knowing that the recipient has returned to dancing.A young man and a young woman – each of them a donor, suddenly entered the room, and two people somewhat older than them got up to embrace them. The second couple had received their kidneys from the first.President Rivlin said that if a member of his family was in need of a kidney, he would unhesitatingly donate one of his. He hoped that he could be sufficiently selfless to do the same for a stranger.“You are all exceptional people,” he told the donors. “You need a special nobility of character for volunteerism of this kind. You are helping people who have no hope other than a kidney donation.”Judy Singer, a kibbutznik, married and the mother of three daughters, said that three years ago, she learned a about a woman named Rena, who was in desperate need of a kidney. Rena was approximately her own age and had two children. Singer didn’t hesitate, and donated a kidney. “Three years ago, Rena was sick and I was healthy,” she said. “Now we’re both healthy.”Addressing the Rivlins, Singer said: “We’re not special; we’re all ordinary people. If more people understood what means to be in a position to donate the gift of life, they’d all be standing in line.”Journalist, author and radio and television personality Shaul Meizlish, speaking on behalf of the recipients, told the Rivlins: “I can’t begin to say what we go through while waiting for a suitable donor, and then waiting again during the testing process.” The sole comfort, he said, is that Haber and his wife become surrogate parents to every patient, and are there with them every step of the way.“To be on dialysis two or three times a week is like going through a laundry wringer,” said Meizlish.He also urged more donors to come forward, because “there are 1,200 people waiting for a kidney transplant.”One of the members of the president’s staff who could best empathize with the aims of Matnat Chaim, was the president’s bureau chief Rivka Ravitz, whose late father-in-law MK Rabbi Avraham Ravitz was in need of a kidney. All 12 of his children volunteered to donate one to him. Eventually, it was his eldest son Moshe who became the donor. Moshe has a son who followed in his father’s footsteps and also donated a kidney, said Rivka Ravitz when speaking to The Jerusalem Post about her brother-in-law and nephew. The nephew wasn’t present, but the young woman who received his kidney was, and Ravitz was as excited to meet her as if meeting one of her own daughters.