Thousands protest gas agreement at events around the country

"Natural gas is a public resource, and as such, it must serve the public first and foremost." 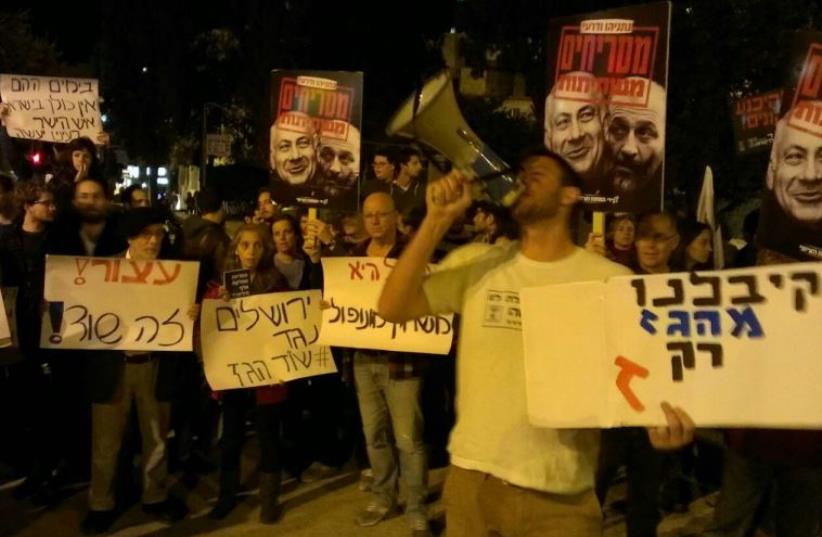 Demonstrators gather in Jerusalem to protest the gas deal
(photo credit: GREEN COURSE)
Advertisement
Israelis took to the country's city centers on Saturday night in a last-ditch effort to protest a natural gas compromise outline they have deemed a "robbery" of public rights.While the main demonstration took place in Tel Aviv at Habima Square, 14 other similar events occurred in Jerusalem, Beersheba, Haifa and a number of other cities throughout the country – organized by the nationwide Green Course student movement, the Gas Campaign Staff group and other organizations.The activists are demanding that, rather than implementing an existing agreement that they feel favors a corporate monopoly, the government must develop a plan that will better suit Israel's socioeconomic needs."Natural gas is a public resource, and as such, it must serve the public first and foremost," said Green Course CEO Mor Gilboa. "We demand the immediate establishment of a professional committee, including experts and representatives of environmental and social organizations, who will in the future discuss the energy and natural gas sectors of the State of Israel and whose conclusions will be submitted for approval in a referendum."Saturday night's events follow another Tel Aviv demonstration last week, after which Gilboa and Green Course activist Adi Peled were questioned by police and issued a temporary restraining order banning them from the Tel Aviv area. The order was eventually lifted on Thursday.In August, the cabinet approved the outline of a long-disputed agreement between government bodies and the most prominent gas companies that would allow natural gas to be extracted from major offshore fields.However, former antitrust commissioner David Gilo – who resigned over the issue – refused to support the outline, saying it would stifle competition in the gas market. To circumvent such a refusal, the economy minister can invoke Article 52 of the 1988 Restrictive Trade Practices Law (The Antitrust Law), citing national security interests.Yet former economy minister Arye Deri was not willing to invoke Article 52, arguing that the clause had never been implemented in the country's history. Deri requested that his authority be transferred to the entire cabinet, but the coalition was unable to acquire the necessary majority to approve such a transfer.On November 1, Deri therefore resigned from his role as economy minister, leaving Prime Minister Benjamin Netanyahu in charge of the position and able to invoke Article 52.Such a move is the final step necessary toward cementing the disputed agreement. It remains unclear, however, as to when or if Netanyahu will implement the article.