Three times as many Arabs as Haredim volunteer for national service 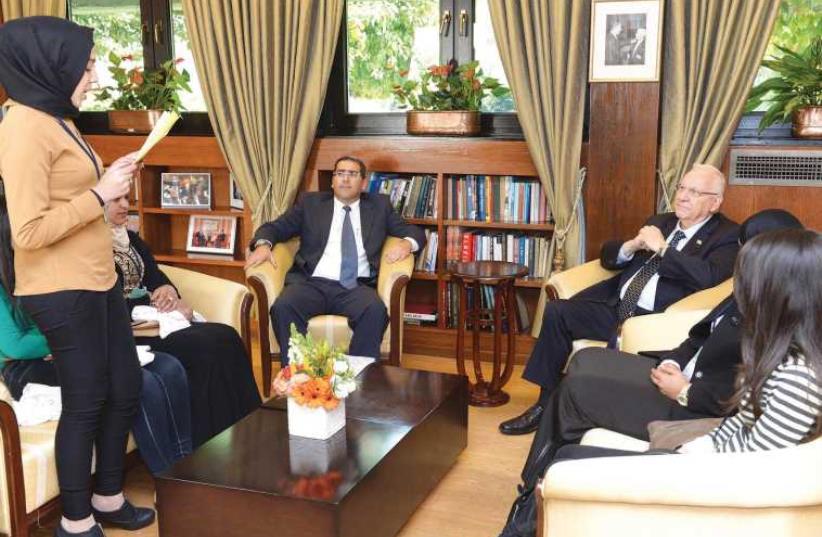 Rivlin meets with Arab volunteers in national civil service at his residence in Jerusalem earlier this month.
(photo credit: Mark Neiman/GPO)
Advertisement
Three times as many Arabs as haredim (ultra-Orthodox) volunteer for national-civic service, the director of the National- Civic Service Authority told the president on Sunday.Speaking at an event at the President’s Residence at which the most outstanding volunteers were honored, Sar-Shalom Jerbi said that of some 18,000 volunteers, 8,500 came from national-religious backgrounds, 4,500 were Arabs and 1,500 were haredim.Most of the others were army rejects who wanted to contribute to the country, and were frustrated because the army had no need for them.“They are contributing to security on a different level,” said Jerbi.He said all non-Jewish volunteers are given courses in Hebrew so that they can find their places in mainstream society.Ahmed Zatrah from Ein Nakuba, an Arab village south of Abu Ghosh, is a volunteer policeman, with a command of Arabic, Hebrew and English.“We’re very proud of you,” President Reuven Rivlin told Zatrah and called on Arab citizens in general to come forward and to do their bit for the state, because “even though Jews and Arabs have their disputes, in the final analysis we are all members of one nation and have responsibility for each other.”Zatrah told The Jerusalem Post that he had volunteered because he felt that he should do something for the country in which he lives, and that if he did so, it would benefit him in future. He is willing to serve for as long as he is needed.Liora Cohen, an immigrant from France who came to Israel on her own three years ago, now speaks fluent Hebrew, works with senior citizens and gets them to tell her their life stories.She advised all new immigrants to do some form of national service, which she said would help them integrate quickly and would also be rewarding simply in the knowledge that they had been able to help others. Israel had given her a lot over the past three years, she said, and she could do nothing less than give back.Israel Guetta, a haredi young man who came from Italy at the age of 12, helps to educate children of mothers in a facility for battered women. He also regards his volunteer activities as a form of reciprocity in return for all that he received.“I didn’t want to be different,” he said. “I wanted to pay back what I owe to the state and also to be in a position where I could be part of mainstream society. Aside from all that, there was never any reason not to volunteer.”Rivlin remarked that the distress of individuals in different sectors of society is alleviated by volunteers, who sometimes have their own special needs because of their physical conditions.In fact, one such young man, Slava Yorchenko, who has ALS and is confined to a wheelchair, developed a talent for public speaking and frequently lectures to groups of people who also have physical disabilities advising them to focus on what they can do and how they can contribute to making life better and more interesting for others.The strength of every society is based on volunteerism, Rivlin said, adding that conventional wisdom says we’re living in a “screen generation” and that today’s youth don’t have time to give of themselves because they’re too busy in front of one screen or another. But after reading the details pertaining to each of the outstanding volunteers he said, “I reached the conclusion that Israel can be confident of a bright future.”He had read recently that certain public institutions will accept employees only of a particular caliber and of certain complexion, said the president, saying “this is disgusting.”“When we speak of volunteers there is no discrimination, and when a company takes on new staff on the basis of the color of their skin or their ethnic background, I find this highly objectionable.”Agriculture Minister Uri Ariel, who also has ministerial responsibility for the National- Civic Service Authority, said it was the social project of the state and that he would not permit discrimination in any form to interfere with the status quo.“There is a place for everyone and there will be a place for everyone,” he said.Noting that the event was taking place during the nine days prior to Tisha Be’av, and that the Temple had been destroyed due to unconditional hatred, Ariel described volunteering for NCS as an act of unconditional love in the huge variety of social needs that are being met.