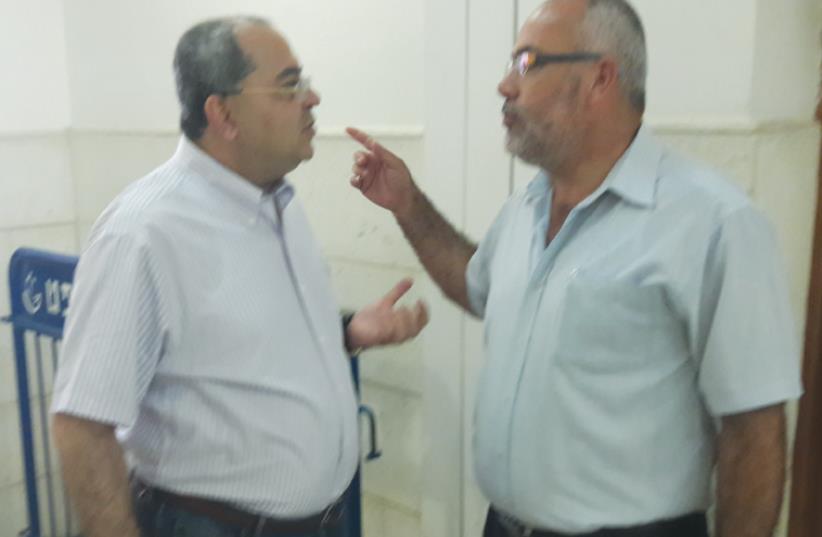 MK AHMAD TIBI (left) speaks with MK Osama Sa’adi at Ben Deri’s trial yesterday
(photo credit: YONAH JEREMY BOB)
Advertisement
The trial of alleged Beitunya shooter and former border policeman Ben Deri for manslaughter continued Tuesday with MK Ahmad Tibi accusing Deri’s lawyer of badgering the father of the Palestinian minor who was killed.Tibi also said the court needs to better protect the translator from pressure from Deri’s lawyer, Zion Amir.Palestinian Nadim Nuwara, 17, was killed on “Nakba Day” in May 2014 in Beitunya, southwest of Ramallah, allegedly by Deri.Deri was indicted by the Jerusalem District Attorney’s Office on November 23, 2014, for the fatal shooting of Nuwara when scores of Palestinians attacked soldiers with stones at a Beitunya protest near Ofer Prison, located between Ramallah and Givat Ze’ev, to mourn the establishment of the State of Israel.The video of the shooting, which seemingly depicts an absence of any immediate danger, went viral and attracted global attention.Attorney Amir for his part accused state prosecutor Geula Cohen, and the prosecution generally, of “a grave obstruction of justice” or tampering with evidence by trying to secretly question new witnesses mid-trial without notifying him.All of the controversy on Tuesday surrounded the testimony of Nuwara’s father, Siyam.Siyam recently testified to a number of details to support the case against Deri, including confirming that the Palestinian shot by Deri was his son, Nadim.Tibi was criticizing how Amir questioned Siyam, including sarcastically calling him “a genius” of detail when trying to undermine some of the aspects of his narrative.“[For a] Jewish father who has lost a family member, the defense lawyers would not act like this,” Tibi told The Jerusalem Post.He also said Amir was jumping in before the translator was able to fully translate both questions and answers in a way that hemmed Siyam into moving in whatever direction he wanted.In a remarkable moment during a break, Tibi convinced Amir to talk to Siyam and convey his sympathies and to explain that he was not being disrespectful, but that he genuinely thought there were discrepancies in the state’s case and was only doing his job as a defense lawyer.On the attack and with nine border policemen in attendance to support Deri, Amir was furious when he learned that the prosecution was moving to question new witnesses who were involved in transporting Nadim to the hospital without telling him in advance.As Amir pressed the issue, it became clearer what had occurred.In the last hearing, when Amir cross-examined Nuwara’s father, Siyam revealed for the first time that he had a journal with the names of people who brought his son’s body to the hospital from the spot where he was shot.Learning about these persons’ identities for the first time, the state wanted to supplement its investigation, even though the trial has started, to ascertain if they should be called as witnesses.Amir viewed the move from a more nefarious perspective.In his view, these persons should be witnesses for the defense who might help prove that Nadim was not the person shot by Deri.Further, he argued that now that the trial had started, the state was barred from supplementing the investigation and they must be brought into court without advance notice of what they will say.He also accused the state of wanting to bring the potential witnesses into the police to try to coordinate their stories in a way that helps the prosecution.Judge Daniel Teperberg ruled that the state could not summon the potential witnesses to the police pending giving Amir a first opportunity to call them as witnesses in court, At the same time, Teperberg responded to Cohen’s concern at delaying questioning these potential witnesses.She said that if they do not come to the police soon and Amir does not call them soon as witnesses, their testimony could be forgotten, lost or otherwise compromised.Teperberg said that if Amir does not call them as witnesses within a reasonable time, Cohen can then summon them to the police.