Touring the battlefields of the past

Many of these sites may go unnoticed in daily life, as one becomes used to seeing them or is not aware of their existence. 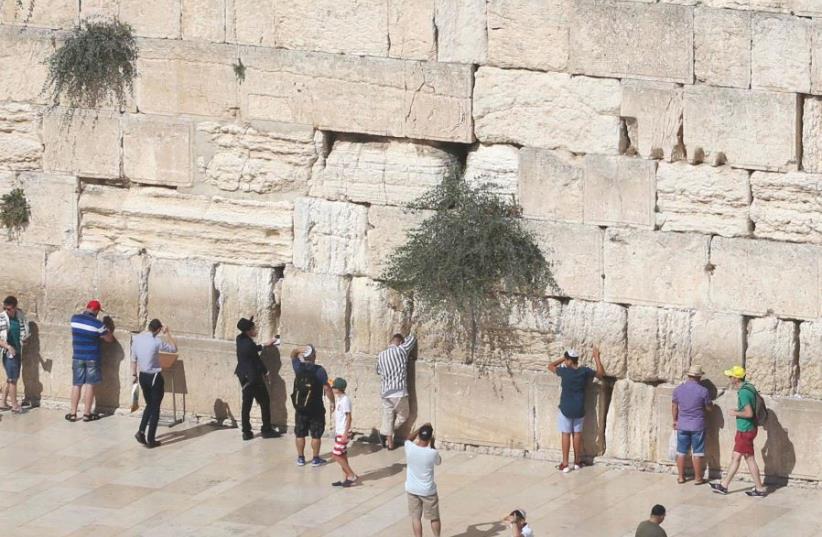 People at the Western Wall in Jerusalem
(photo credit: MARC ISRAEL SELLEM)
Advertisement
As Israel nears the 50th anniversary of the Six Day War and the celebrates the 69th year since the nation’s momentous rebirth, tourists and locals in the capital have a wealth of sites to see that commemorate events from 1948 and 1967. Many of these sites may go unnoticed in daily life, as one becomes used to seeing them or is not aware of their existence. Here is a partial list of some places to visit.Notre Dame of Jerusalem Center 3 Hatzanhanim Road, Jerusalem Built between 1885 and 1904, this massive Catholic compound was among the largest buildings in the region at the time. In 1948 it held the strategic high ground next to the Old City. It became a site of fierce fighting between the Jordanian Legion and the nascent Israeli army on May 20 of that year when an armored column attempted to penetrate west Jerusalem from Sheikh Jarrah. The building’s stout walls were badly damaged in the fighting.Castel National ParkKeren Kayemet Street, Maoz Zion Located opposite Mevaseret Zion on Route 1, Castel has been a strategic hill since antiquity. The Crusaders build a fort on it called Castellum Belveer, from which it received its current name. There was an Arab village near the site called al-Kastel.After the UN Partition Plan was passed in November 1947, Arab forces laid siege to Jerusalem. To open the road, the Palmah launched Operation Nahshon on April 1, 1948. They initially found the village empty, but were then attacked by large numbers of Arabs led by Abd al-Kader al-Husseini, a relative of the mufti. His forces briefly took Castel, but he was killed and the next day the Palmah found the hill empty again. The park is open from 8 a.m. to 5 p.m. Follow signs for Castel after exiting Route 1.Bab el-Wad/Sha’ar Hagai and LatrunLatrun and Route 1 Literally the “gate of the valley,” the strategic “choke point” was where Arab forces attempted to cut off the road to Jerusalem between 1947 and 1948. Palmah fighters from the 10th (Harel) brigade led by Yitzhak Rabin helped capture the road. Today the entire route from Latrun to Shoresh is littered with remnants of the battles. These include numerous armored cars, made in garages for protection against Arab snipers. These kinds of improvised vehicles have become a common sight today on the battlefields of Iraq and Syria, but Jewish fighters were pioneers in making them with scant resources at the time.Because the Jordanians held the police fortress at Latrun, Israel had to build an improvised road to Jerusalem called the Burma Road. The old water pumping stations on the road also have spray-paint from the Palmah and there are memorials on the Burma Road and near Shoresh that recall the casualties who fell attempting to open the road.It wasn’t until 1967 that the current Tel Aviv-Jerusalem road could be used again. Despite five attacks on the Jordanian positions at the police fort and around 168 killed, the Israeli army was unable to take Latrun. Some Holocaust survivors who had just arrived from Europe fought in the battle of Latrun, and visitors to the Armored Corps Memorial Site and Museum and police fort can learn the history of the site. Open Sunday to Thursday 8:30 a.m. to 4:30 p.m., Friday and holiday eves 8:30 a.m. to 12:30 p.m., and Saturday 9 a.m. to 2 p.m.Museum of Underground Prisoners1 Mishol Hagvura Street, JerusalemLocated at the former Russian Compound women’s hostel, which was built in the 1860s, the site became a prison under the British Mandate. Numerous Jewish underground members from the Hagana, Irgun Zva’i Leumi and Stern Group were kept in the prison. The prison was taken by the Jewish forces on May 14, 1948. Opening hours: Sunday to Thursday 9 a.m. to 5 p.m. 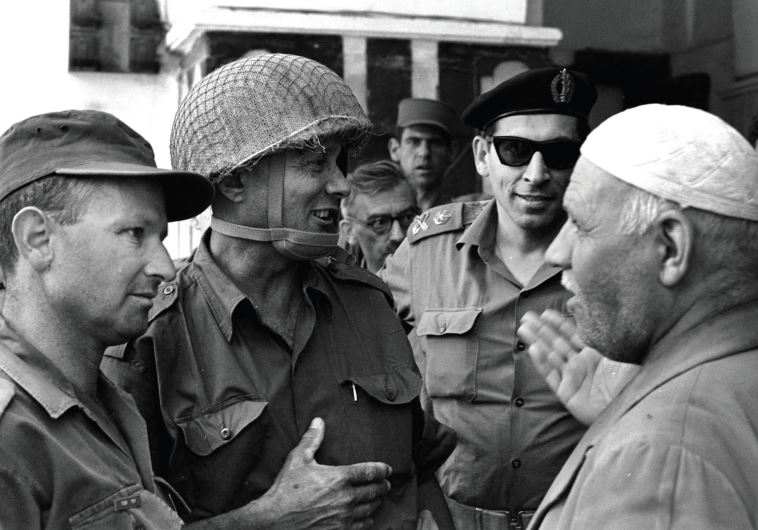 Former defense minister Moshe Dayan, (center), and Gen. Rehavam Ze'evi, (2nd left), in conversation with the Palestinian keeper of the Cave of the Patriarchs in Hebron during the Six Day War (photo credit: AFP PHOTO)
Ammunition Hill5 Zalman Shragai Street, Jerusalem This was a key strategic site in the battle for Jerusalem in 1967. On June 5 of that year, the Paratroopers Brigade was brought to Jerusalem, forgoing a planned jump in Sinai. On June 6 after 2 a.m., elements of the brigade began to fight for control of the hill. After a brutal battle in which 36 Israeli soldiers and 71 Jordanians were killed, the Paratroopers took the Jordanian trench system by 6 a.m.According to the website of the museum, “10 of the soldiers who fought in this battle were given citations by the Israeli Chief of General Staff. The commander of the Paratroopers Brigade was Mordechai Gur. The commander of the 66th Battalion was Yossi Yafe.” The site contains original trenches and bunkers, a model of Jerusalem, park, museum and exhibits. Sunday to Thursday 9 a.m. to 5 p.m., Friday 9 a.m. to 1 p.m.Government HouseDaniel Yanofsky Street, Jerusalem This was the former compound of the British High Commissioner. The exquisite grounds have been occupied by the UN since 1948. On June 5, 1967, after Jordan began shelling west Jerusalem, Jordanian forces from the 27th infantry brigade attempted to seize the demilitarized zone. Soon after they had easily taken the compound, Israeli army forces from the Etzioni Brigade attacked them and drove them out. Israeli forces went on to take Sur Bahir nearby. The site is closed to visitors, but one can walk around the outside of the fenced compound. Trenches can still be seen next to Kibbutz Ramat Rahel.Mount ScopusChurchill Boulevard, Jerusalem Site of a small Israeli contingent between 1948 and 1967, this was an island of Israeli territory within Jordanian east Jerusalem. The Hebrew University and Hadassah Hospital located there were deserted during those two decades. There is a small plaque opposite the Hebrew University entrance that commemorates the Israelis who served on the strategic hill. During the 1967 war there was fear a Jordanian tank column from Jericho might reach Mount Scopus, but it was destroyed on the road by aircraft before it could do any damage.Zion GateOld City, Jerusalem The gate to the Old City is situated next to Mount Zion, which was a strategic hill during the war. The gate also guaranteed access to the besieged Jewish Quarter. On May 20, 1948, Jewish fighters were able to take control of Mount Zion, but were unable to penetrate the Old City. The Jewish Quarter eventually surrendered to the Jordanian Arab Legion. The bullet holes from the battle can still be seen in the walls of the Old City. 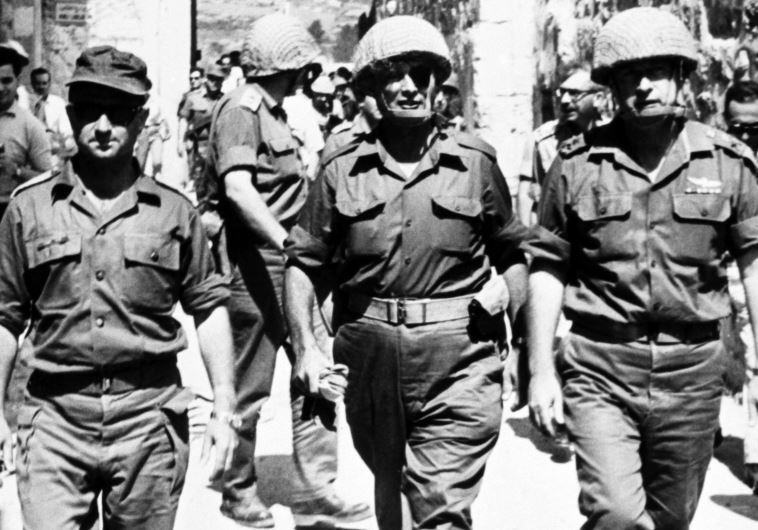 Photo taken in June 1967 in Jerusalem shows the chief-of-staff of the Israeli army, Yitzhak Rabin (R), Defense Minister Moshe Dayan (C), and GOC Central Command Uzi Narkiss during the Six-Day War (photo credit: AFP PHOTO)
Lions’ GateOld City, Jerusalem The Paratroop Brigade entered the Old City through this gate during the Six Day War. They then moved toward the Temple Mount and unfurled the Israeli flag (which they soon took down). Iconic photos from June 7, 1967 show Israeli tanks next to the Gate and Moshe Dayan, Yitzhak Rabin and Uzi Narkiss strolling through the gate.The KotelOld City, JerusalemThis holy site of Jewish pilgrimage and yearning for the Temple was cut off from the Jewish people and Israel between 1948 and 1967. When the paratroopers reached it in 1967 photos of them became a symbol of the victory. The website of Israelforever.org has this quote recalling that day: “I am speaking to you from the plaza of the Western Wall, the remnant of our Holy Temple. ‘Comfort my people, comfort them, says the Lord your God.’ This is the day we have hoped for, let us rejoice and be glad in His salvation. The vision of all generations is being realized before our eyes: The city of God, the site of the Temple, the Temple Mount and the Western Wall, the symbol of the nation’s redemption, have been redeemed today by you, heroes of the Israel Defense Forces. By doing so you have fulfilled the oath of generations, ‘If I forget thee, O Jerusalem, may my right hand forget its cunning.’ Indeed, we have not forgotten you, Jerusalem, our holy city, our glory. In the name of the entire Jewish people in Israel and the Diaspora, I hereby recite with supreme joy: Blessed art Thou, O Lord our God, King of the universe, who has kept us in life, who has preserved us, and enabled us to reach this day. This year in Jerusalem – rebuilt!” – General Shlomo Goren, Chaplain of the Israeli Defense Forces, at the Western Wall