Turkish journalists were shocked by their treatment at the hands of Israeli security just as Israeli and Turkey are trying to normalize relations. 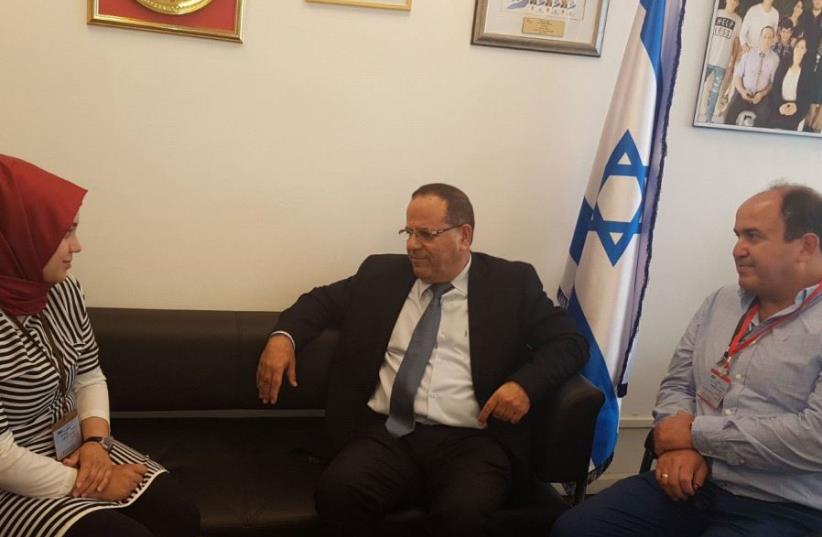 Ayoub Kara with Turkish journalists who complained of mistreatement by Israeli security at Cyber Week 2017.
(photo credit: AYOUB KARA)
Advertisement
Three Turkish journalists complained on Tuesday of excessive and offensive behavior towards them carried out by Israeli security staff at Israel's Cyber Week 2017.In a letter obtained by The Jerusalem Post's sister publication Maariv, economy editor of the Daily Sabah, Seyma Eraz explained that she, Kenan Ozcan, and Emre İzkübarlas from Fox Turkey were invited by the Israeli Ministry of Foreign Affairs through the Israeli consulate in Istanbul to cover Cyber Week 2017, taking place at Tel Aviv University.While entering the conference, the three were chosen from a line of around 30 journalists from around the world for additional security checks.  "I don't know why it was just the three of us," Eraz wrote in a letter submitted to the Israeli Minister of Communications.Eraz wrote that she waited about 50 minutes to be checked without explanation from security officials, before being taken aside by two female officers to be searched. Eraz was instructed to remove her headscarf, to which she responded, "I told them that they can check me by hand, but I'm not going to take my scarf off." She then asked for her belongings back, wanting to leave. "I have been in many countries," she wrote, "attending many meetings attended by PMs and Presidents, but I have never been humiliated like this for my entire life." [sic] While her possessions  were thoroughly searched, the two male journalists were asked to remove their pants. "This is crossing the line," she wrote. "This is humiliation."Eraz also complained that their cameras were dismantled to be inspected, while "Japanese journalists" were allowed to enter with equipment unaccosted. A representative from the prime minister's office and later the event's head of security approached the journalists to apologize. Eraz asked him what the procedure was for choosing whom to check in detail, and "how possibly they can ask a man to take their pants off," but she wrote that he responded that he could not discuss their security policy with her.The Cyber Week conference was attended by several high ranking security officials.In the end, Eraz left. "I can't accept this kind of humiliation," she wrote."I still just cannot believe such a behavior at a period Turkey and Israel trying to normalize relations,[sic]" she wrote in closing. "We are so sad to have experienced this. At the end of the day, we are just journalists."The letter was presented to Israeli Minister of Communication Ayoub Kara, who invited the journalists to his office, where he officially apologized to them.