The defendants, 31-year-old Gery Shalon and 40-year-old Ziv Orenstein, were indicted by a grand jury in New York in June, on multiple charges, including conspiracy to commit securities fraud. 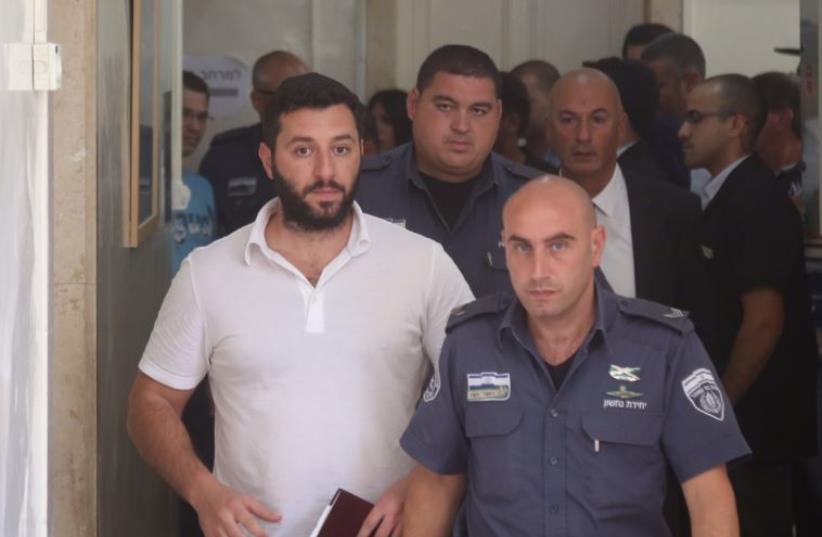 Israelis indicted for securities fraud scheme‏.
(photo credit: MARC ISRAEL SELLEM/THE JERUSALEM POST)
Advertisement
Two Israelis indicted in the US and facing extradition for allegedly using fake passports and identities to run a stock fraud scheme that made millions were ordered kept in custody for 20 days by the Jerusalem Magistrate’s Court on Wednesday, due to fear that they pose a flight risk.A grand jury in Manhattan indicted the suspects, Gery Shalon, 31, and Ziv Orenstein, 40, in June on charges of conspiracy to commit securities fraud, conspiracy to commit wire fraud, securities fraud, wire fraud, conspiracy to commit fraud using false documents, aggravated identity theft and money laundering conspiracy.A month later, US authorities submitted an extradition request to their Israeli counterparts.On Monday, both were arrested by Israel Police officers, who were working closely with FBI investigators who had traveled to Israel as part of the case and requested assistance.According to the indictment issued by the United States District Court for the Southern District of New York, Shalon, described as the ringleader, was throughout the duration of the scam a resident of Israel. The indictment says that he orchestrated “multi-million dollar stock manipulation schemes – called “pump and dump” – to manipulate the price and volume of traded shares in numerous publicly traded stocks by means of deceptive and misleading email campaigns, and manipulative prearranged stock trading.”In addition to Shalon and Orenstein, a third main suspect, American Joshua Samuel Aaron, allegedly played a major role in the scam but has yet to be arrested. US authorities believe Aaron worked as the scam’s front man in the US, making connections with associates under the direction of Shalon. Aaron is not a citizen of Israel, though he resided in the country at different times since the scam began in 2011. The suspects would allegedly find companies to target for manipulation, and would buy up large amounts of stock using shell companies and brokers accounts they set up with fake identities. They would also send out millions of spam emails from the two straw companies – “Entersea Limited” and “Jemsta Enterprises” (based in England and the British Virgin Islands, respectively) touting the stocks, which along with their bulk purchases would help drive up the stock prices.Aaron also set up another shell company, called Warmkal Trading Limited, which was allegedly used to launder profits.According to the indictment the defendants used a series of fake identities, with Shalon using names including “Phillipe Mousset” and “Christopher Engeham,” while Orenstein was known to use the names “Aviv Stein” and “John Avery”, while Aaron went by the alias “Mike Shields.”In court on Wednesday, the prosecution said that the crimes the defendants are suspected of are of the utmost severity and they are expected to receive very lengthy prison terms in the US.The Israel Police said Tuesday that more than 10 US law enforcement officers have been in Israel over the past few days working out of the cybercrimes unit headquarters in Lod.The arrests were first reported by Bloomberg on Tuesday night, when the case was still under a gag order in Israel. The Bloomberg report said the arrests were part of a monthslong investigation of a group of friends who met in college in Florida and are tied to the JP Morgan hack in 2011 and 2012, with suspects in Israel accused of security fraud for inflating the value of low-volume stocks.