Thirteen academics from several leading universities in the UK participated in a conference over the course of the weekend on quantitative studies of conflict in international relations. 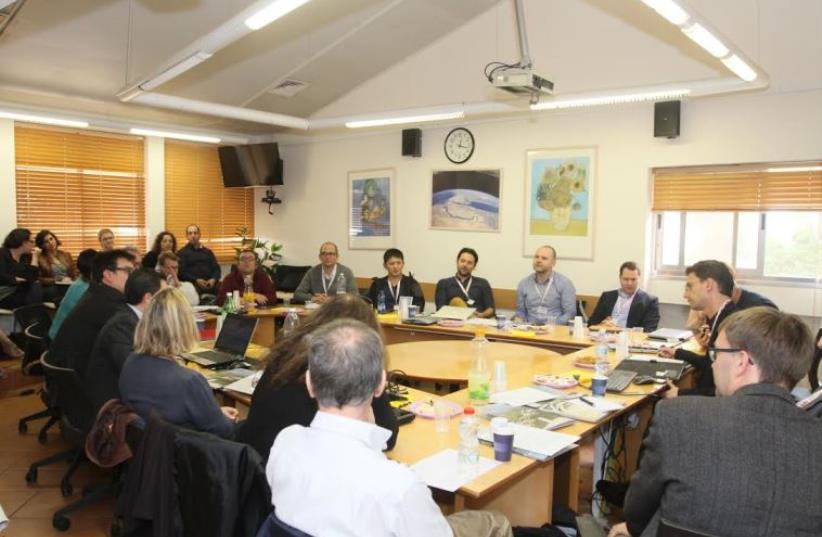 Haifa University conference with Israeli and UK academics.
(photo credit: HAIFA UNIVERSITY)
Advertisement
“Everyone has political views but there is no place for academic boycotts,” Dr. Carmela Lutmar of the University of Haifa told The Jerusalem Post on Sunday.The lecturer at the Division of International Relations in the School of Political Sciences hosted 13 academics from several leading UK universities for a weekend conference about quantitative studies of conflict in international relations.Initiated in coordination with Prof. Kristian Gleditsch of Essex University, the forum was held against the backdrop of increasing calls for the academic boycott of Israel among many UK academics.“There was a public discussion among the union of university lecturers regarding an academic boycott of Israel.I thought I would do something proactive on the issue of calls for a boycott so I contacted colleagues from Haifa University and we discussed the possibility to a joint dialogue and as a result we are here,” Gleditsch said.Lutmar and Gleditsch decided to hold the conference in Israel to promote cooperation and joint scientific research in academia.“It is important to distinguish between politics and academic scientific research – everyone has political views but there is no place for academic boycotts,” Lutmar said.“The fact that these professors and lecturers came to Israel does not mean they endorse the government’s policies, it doesn’t mean that they agree or disagree with them, it simply means that they reject the academic boycott of Israel – there is no connection between politics and scientific academic research,” she added.Gleditsch said she knew of no institution to actually announce a boycott.“I have no met anyone who is for the boycott. I think that the majority of people feel that you can disagree with a country’s governmental policies, but that a boycott of academic institutions is pointless and will have a counter effect from what we want to achieve,” he said.Prof. Andrea Ruggeri, a professor at Oxford University, said he was “open to intellectual development.“I believe that we must delve in to find an academic solution and thus I do not think we should put a stop to the dialogue even during a time when there are calls for a boycott of Israel.”“It is important to continue the dialogue and academic research regardless of the politics surrounding us,” Lutmar said.