Making his first trip as secretary-general, Antonio Guterres will also go to Ramallah. 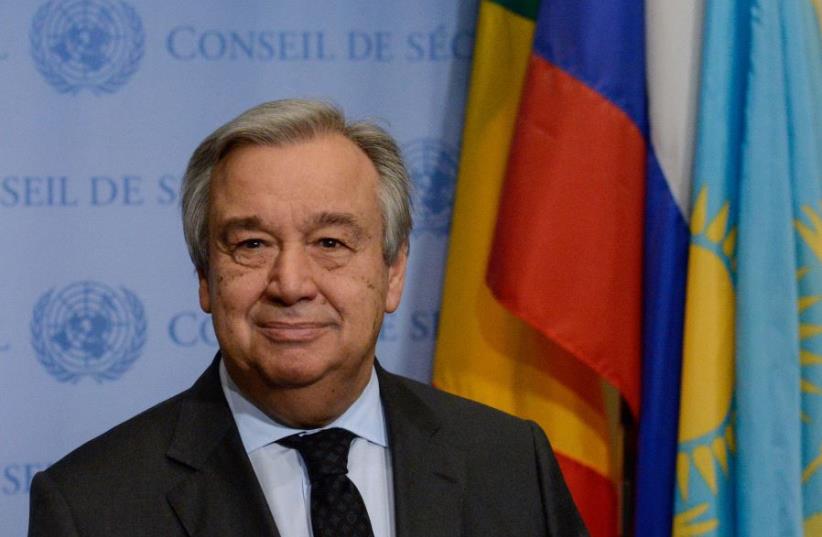 United Nations Secretary-General Antonio Guterres‏
(photo credit: REUTERS)
Advertisement
UN Secretary-General Antonio Guterres is scheduled to visit Israel at the end of the month for his first trip here since taking over from Ban Ki-moon on January 1.While Ban made the first of his 12 visits to Israel in March 2007, within three months of taking office, Guterres’s visit comes after he has already taken nearly 40 official trips abroad, including eight trips to the region: to Iraq, Turkey, Jordan, Egypt, Qatar, Oman, the United Arab Emirates and Saudi Arabia.Kofi Annan, who preceded Ban as UN secretary-general, serving from 1997 to 2006, first visited Israel in an official capacity in March 1998, 15 months after taking office.Guterres, who according to the Foreign Ministry is scheduled to be here August 27-29, is expected to couple his visit to Israel with one to the Palestinian Authority. He has also expressed interest in going to the Gaza Strip, though that segment of the trip has not yet been finalized. Ban visited Gaza four times during his 10-year tenure.Guterres is expected to meet Prime Minister Benjamin Netanyahu, President Reuven Rivlin and Defense Minister Avigdor Liberman while in Israel, and PA President Mahmoud Abbas in Ramallah.Guterres is coming at a time when Israel has withheld some $9 million of its overall $47m. contribution to the UN to protest resolutions passed by UNESCO and the UN Human Rights Committee. This $47m. annual contribution includes $11m. for operational fees and $36m. for UN peacekeeping forces.Though Israel has a famously fraught relationship with the UN and many of its organizations, senior Israeli officials say that Guterres is trying to fight the anti-Israel bias at the UN against very strong countervailing forces. According to these officials, Guterres is more receptive than his predecessors to Israel’s complaints against biased reports and prejudicial treatment.Ambassador to the UN Danny Danon, who will accompany Guterres during his visit, told The Jerusalem Post that Israel welcomes the secretary-general’s approach, which is that Israel is an equal member of the UN, and that he will not allow antisemitism to impact on the organization’s workings.But, Danon said, “we have to take into account that there is a great deal of pressure on him.”Danon said that Jerusalem does not expect the former Portuguese prime minister to be pro-Israel, only to maintain objectivity in the face of a great deal of pressure in the UN for him not to be objective.“If you look at the numbers, there is a great deal of pressure against Israel in the UN, and we hope that he will maintain his objectivity throughout his tenure,” Danon said.Asked if he felt that Guterres has been objective so far, Danon said he did not want to give “grades.”“He has had some important comments, he has had others we did not like,” Danon said. “His overall approach, however, is to see how he can be helpful, and not issue statements that are unhelpful.”The secretary-general has altered the language of some UN reports, and refused to sign others that bash Israel, though there is a degree of uncertainty whether this reflects his personal position or is a result of pressure on him from the Americans to change the world body’s attitude toward Israel. US ambassador to the UN Nikki Haley has made combating anti-Israel bias at the UN one of her main priorities.At a World Jewish Congress gathering in March, Guterres said that “Israel needs to be treated like any other UN member state” and that it has an “undeniable right to exist and to live in peace and security with its neighbors.” He added that “the modern form of antisemitism is the denial of the existence of the State of Israel.”And in January, after a UNESCO vote in October expunged a Jewish connection to the Temple Mount, Guterres said in an interview that it is “completely clear that the Temple that the Romans destroyed in Jerusalem was a Jewish temple.”But his statements have not always found favor in Jerusalem.On the 50th anniversary of the Six Day War, he issued a statement saying, “This occupation has imposed a heavy humanitarian and development burden on the Palestinian people. Among them are generation after generation of Palestinians who have been compelled to grow up and live in ever more crowded refugee camps, many in abject poverty, and with little or no prospect of a better life for their children.”He continued: “The occupation has shaped the lives of both Palestinians and Israelis. It has fueled recurring cycles of violence and retribution. Its perpetuation is sending an unmistakable message to generations of Palestinians that their dream of statehood is destined to remain just that, a dream; and to Israelis that their desire for peace, security and regional recognition remains unattainable.”Danon took issue with the secretary-general’s statement at the time, saying: “It is preposterous to blame terror and violence in the Middle East on the one true democracy in the region.”