The UN human rights office had been due to present its first report on the politically charged issue at a session that opens on Feb. 27. 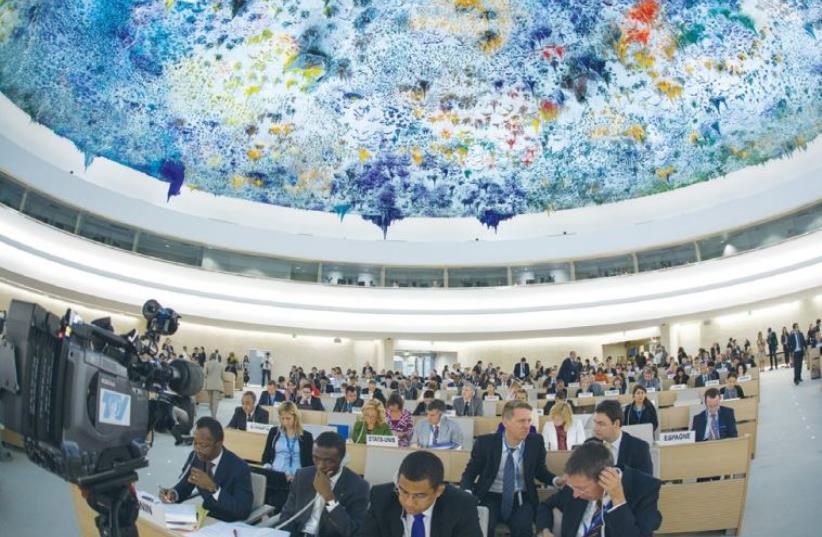 THE OPENING of the 24th session of the UN Human Rights Council in Geneva.
(photo credit: (ERIC BRIDIERS/US MISSION GENEVA))
Advertisement
GENEVA - A United Nations report on establishing a database of companies with business interests in Israeli settlements in the West Bank is set to be delayed until later this year, diplomats and activists said on Friday.The UN human rights office had been due to present its first report on the politically charged issue at a session that opens on Feb. 27, which Palestinian President Mahmoud Abbas is also due to address.But the report is not ready and will be deferred for many months, at least until September, the sources said, adding that an announcement was expected on Monday."There is a need for more time, it is a very complex issue," a Western diplomat told Reuters. "You need to have a clear vision of how you list the companies, what is the exact criteria."
Israel"s Envoy to UNESCO: "We will not take part in this ugly game" over Temple Mount
The issue is sensitive because companies appearing in such a database could be targeted for boycotts or divestment aimed at stepping up pressure on Israel over its West Bank settlements. Goods produced there include fruit, vegetables and wine.Israel assailed the UN Human Rights Council last March for launching the initiative, calling the database a "blacklist" and accusing the 47-member state forum of behaving "obsessively" against Israel.The council had voted in favor of creating the database after 32 states backed a proposal by Pakistan, while 15 abstained, including Britain, France and Germany.The United States, Israel's main ally, had no vote but voiced strong objections. US human rights ambassador Keith Harper said at the time that the resolution was "far outside" the council's mandate and highlighted its "one-sided nature."US President Donald Trump, who meets Israeli Prime Minister Benjamin Netanyahu on Wednesday, has adopted a less uncritical stance on Israeli settlement-building than he appeared to advocate during his campaign.Jeremie Smith, director of the Geneva office of the Cairo Institute for Human Rights Studies, said: "We've heard unofficial reports that there is strong pressure by states who did not support the creation of this database to try to delay its release and bury its findings."SETTLEMENT GOODSThe UN council said last year that businesses had "enabled, facilitated and profited" from the growth of settlements, including through investments, loans, provision of utilities and exploitation of natural resources. Some settlement products had been labeled as originating from Israel.It called for a list of enterprises to be updated annually on the "human rights and international law violations involved in the production of settlement goods."Most countries consider all Israeli settlements to be illegal. Israel disagrees, citing historical and political links to the land - which the Palestinians also assert - as well as security interests.A UN inquiry in 2013, which was the basis for the vote on the database, said that the settlements contravened the Fourth Geneva Convention forbidding the transfer of civilians into occupied territory and could amount to war crimes.The settlements were "leading to a creeping annexation that prevents the establishment of a contiguous and viable Palestinian state," it said.The Israeli parliament approved a law on Monday that retroactively legalized some 4,000 settler homes built on privately owned Palestinian land in the West Bank, drawing condemnation from Europe and the United Nations. Rights groups have petitioned Israel's Supreme Court to annul it.