Netanyahu’s decision came “following condemnations [of the agreement] from members of the Knesset from the ultra-Orthodox parties” and invited criticism from the Supreme Court, the report notes. 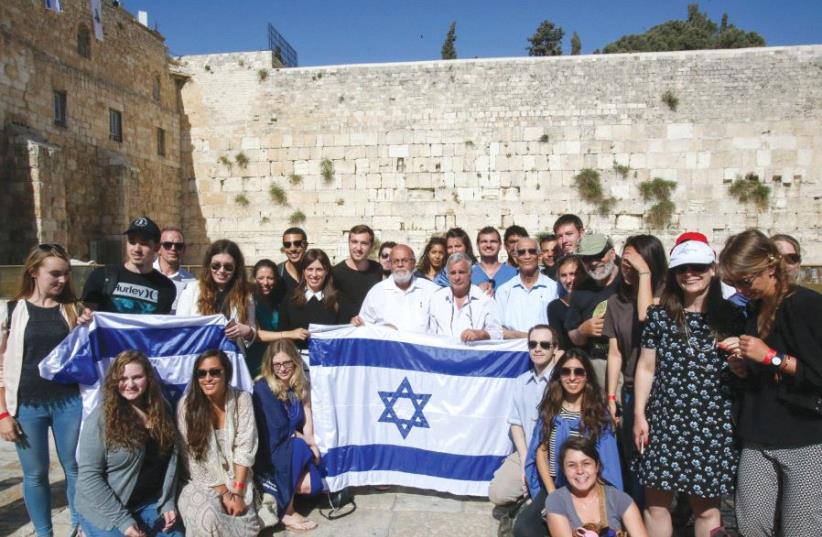 DEPUTY FOREIGN MINISTER Tzipi Hotovely (standing behind left corner of flag) and the three paratroopers from David Rubinger’s iconic 1967 photo (in white shirts) pose with international students at the Western Wall May 11, 2017
(photo credit: MARC ISRAEL SELLEM/THE JERUSALEM POST)
Advertisement
WASHINGTON – An annual State Department report on international religious freedom takes note of Prime Minister Benjamin Netanyahu’s June decision not to implement an agreement on egalitarian prayer at the Western Wall, which has outraged many American Jews.US Embassy officials in Israel have relayed to the Israeli government “the importance of religious pluralism and respect for non-Orthodox streams of Judaism” over the course of several meetings, says the report, which was released on Tuesday.“The government and non-Orthodox activists reached a compromise in January to accommodate ‘egalitarian prayer,’ i.e., Reform and Conservative Jewish services, near the Western Wall, but the government did not implement it,” the State Department report reads.“The government implemented policies based on Orthodox Jewish interpretations of religious law.”Netanyahu’s decision came “following condemnations [of the agreement] from members of the Knesset from the ultra-Orthodox parties” and invited criticism from the Supreme Court, the report notes. It also quotes a Jerusalem Post Magazine poll from September that found 61% of Jewish Israelis favored establishing an egalitarian prayer plaza at the Western Wall.“Embassy-supported initiatives focused on interreligious dialogue and community development and advocated for a shared society for Jewish and Arab populations,” it continues, characterizing relations among religious and ethnic groups in Israel and the Palestinian territories as “strained.”The report also notes that Israel’s security forces periodically restricted Muslim access to the Temple Mount, citing safety concerns, despite a general decrease in days of restricted access from the previous year.“The number of Jewish visitors, reportedly including Temple Mount activists, to the Temple Mount/Haram al-Sharif increased to record levels during the Jewish holidays and national holidays,” the report says.But, it continues, “Netanyahu reiterated his support for the status quo arrangement at the Temple Mount/Haram al-Sharif. He reaffirmed the government’s respect for the role of Jordan and the Jordanian king in administering the site and stated his government had no intention of dividing the site.”