Accompanied by US Ambassador Dan Shapiro and Likud MK Avraham Neguise, the senators toured the outreach center, met with staff and shared a traditional Ethiopian meal. 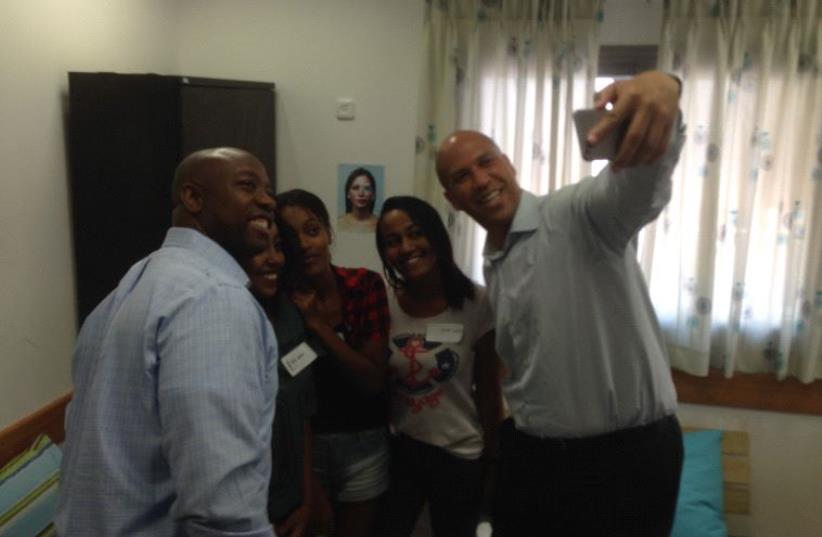 Senator Cory Booker and Tim Scott take a selfe with Ramla youth.
(photo credit: ELIYAHU KAMISHER)
Advertisement
US senators Cory Booker (D-New Jersey) and Tim Scott (R-South Carolina) visited the Ethiopian National Project’s Ramle youth outreach center on Tuesday as part of a Middle East congressional trip.Accompanied by US Ambassador Dan Shapiro and Likud MK Avraham Neguise, the senators, both of whom are African-American, toured the outreach center, met with staff and shared a traditional Ethiopian meal.“It was really uplifting to get a chance to meet members of the Ethiopian community,” Booker told The Jerusalem Post.Scott called the project “extraordinary,” saying it was important to learn about “the process of helping Ethiopian Jews acclimate to Israel.”The Ethiopian National Project, created in 2001, is a joint partnership program funded by the Government of Israel and Diaspora Jewry that aims to assist Israelis of Ethiopian descent to integrate into and succeed in Israeli society.The Education Ministry recently asked the ENP to expand its Scholastic Assistance Program to reach some 9,000 students in 37 cities from grades three to 12.Roni Akale, ENP director-general, told the Post that education is key to improving integration into Israeli society: “Without education, they cannot go anywhere.”According to the ENP, some 12,000 Ethiopian school-age youth require scholastic assistance, representing about a third of the Ethiopian student population.There are around 140,000 Israelis of Ethiopian descent living in Israel.Akale believes education also will help curb elements of racism toward Israelis of Ethiopian decent. “We must educate ourselves to decrease these kinds of racism and educate outsiders about the Ethiopian community,” he said.Qes Efraim Lawi, a spiritual leader of the Ethiopian-Israeli community agreed, saying: “We must close the education gap. The most important thing the kids need is education.”However, Lawi is skeptical about the governments’ long-term commitment to education in the Ethiopian community. “A lot of projects start and stop with different education ministers,” he noted.Akale said he hopes the ENP education program will keep supporting the program, which he said “can be a model for the government,” adding that they still need to reach another 3,000 youths.According to Neguise, a co-founder of the ENP and chairman of the Committee for Immigration, Absorption and Diaspora Affairs, the Ethiopian community still faces a wide variety of challenges.“The challenges are an educational gap, economic gap and cultural gap, and these gaps are challenges for the Ethiopian community and the state of Israel,” he stated. “We also can develop relationships with the African- American community in the US and the Ethiopian community here in Israel, and the Jewish community in America. We can have exchanges of knowledge, resources and programs.”Mazal Abeba, one of the youth participants in the ENP’s after-school program, said it was an honor “but a lot of pressure” to speak in front of the two senators. She said the ENP program was important in helping her with schoolwork and improving her grades.While the event may have been stressful for the participating youths, Booker and Scott were at ease, joking and taking selfies with them.“I’ve never heard of Beyonce!” teased Booker, referring to the famous singer whose poster hangs on the center’s wall. A group of three girls responded with a nervous giggle.