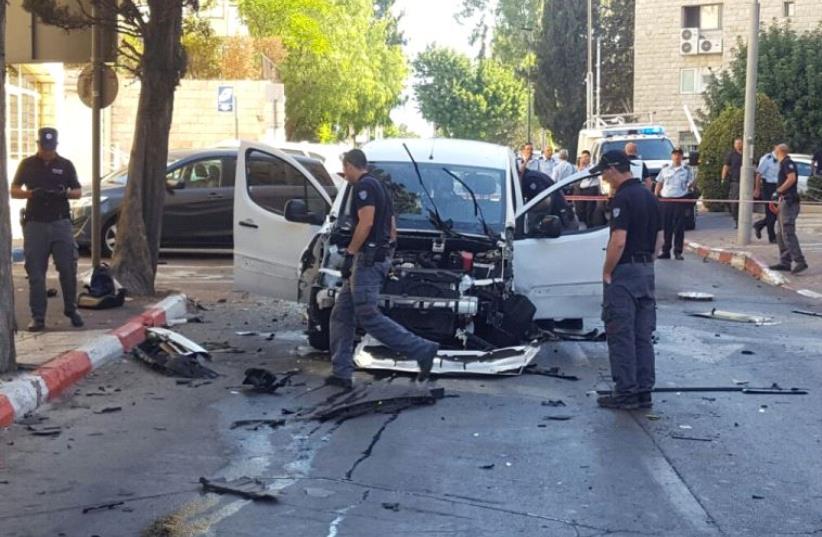 An exploded car in Jerusalem.
(photo credit: POLICE SPOKESPERSON'S UNIT)
Advertisement
A car explosion lightly wounding one man in downtown Jerusalem Wednesday morning was an attempted underworld-related hit, not a terrorist attack, police confirmed shortly after the blast.According to Police spokesman Micky Rosenfeld, the explosion detonated at approximately 8:35 a.m. near Liberty Bell Park, located in the vicinity of the Dan Panorama Hotel and King David Street.“A small explosion took place in the vehicle,” said Rosenfeld shortly after the blast. “One man was injured lightly and police units arrived at the scene examining the vehicle and took evidence, confirming that it was a criminal-related incident.”The unidentified victim was treated at the scene and transferred to an area hospital with light injuries, and the scene surrounding the white car was cordoned-off by police as a forensics team inspected the vehicle, he said.“It appears that an explosive device was planted on the vehicle, which happens much more frequently in Tel Aviv and the Netanya area, but it doesn’t normally happen in Jerusalem,” said Rosenfeld.“It was a criminal, underworld hit, and the investigation is continuing,” he added.Jerusalem Post reporter Greer Cashman, who lives four streets away from the explosion, near the Prime Minister’s Residence, said she could hear the blast from her apartment.“I live three doors from the Prime Minister and it’s not uncommon to hear the sound of a suspicious object being detonated,” said Cashman.  “It so loud that I could hear it in my apartment… which should give you an indication of how loud the explosion was.”