Police at the scene searched for suspects and opened an investigation into the vandalism.

Tag Meir protesters in Jerusalem demonstrate against against recent “price tag” attacks in the West Bank
(photo credit: MARC ISRAEL SELLEM/THE JERUSALEM POST)
Advertisement
Police are investigating two new “price tag” attacks, one in the Arab village of Iksal, just south of Nazareth, the other in Deir Ammar, in the Binyamin region.In Iksal, two vehicles were burned and the phrase “Jews, let’s be victorious!” was spray-painted on a stone wall, the police foreign press spokesman reported on Wednesday morning.Police at the scene searched for suspects and opened an investigation into the incident. MK Itzik Shmuli, chairman of the lobby against price tag crimes, said in on Wednesday morning that “madmen from among us are trying to destroy the fabric of relations between Jews and Arabs in Israel and ignite an inferno between us and our neighbors.”"These crimes should be treated as nationalistic terrorism for all intents and purposes, and the perpetrators should be severely punished," he argued. "This is the tenth such event lately. Law enforcement authorities must take a more determined and aggressive line, including preventive measures, to stop this once and for all."MK Eitan Broshi, a former assistant to the defense minister in settlement affairs and head of the Jezreel Valley Regional Council, commented that we don’t just have to deal with the mosquitoes, we have to dry the swamp.”“The incident reflects an escalation of hostilities against Arab-Israeli citizens who are peaceful, like those of Iksal. This must stop, both in the West Bank and within the Green Line,” Broshi elaborated. “We will not allow a number of rioters to spoil the fabric of good relations in the Jezreel Valley.”Former defense minister MK Amir Peretz (Zionist Union) responded to the attack, tweeting that “we must not allow the wave of price tag attacks to turn into a tsunami. [Prime Minister Benjamin] Netanyahu, [Avigdor] Liberman and [Gilad] Erdan must stop their silence. When they do not stop hate crimes in the West Bank, they spread to Arab Israeli villages and soon they will also reach Jewish settlements. These acts must be stopped and the perpetrators should be brought to justice.”

Arab-Israeli MK Ahmad Tibi called the price tag incident in Iksal racist, and emphasized that drastic action needed to be taken. “The police are not succeeding in eradicating crime in the Arab communities and therefore fail to prevent actions such as price tag attacks against Arabs.”The second attack was reported on Wednesday morning in Deir Ammar, where the tires of several vehicles were punctured and the words “Let’s take our fate into our own hands” were spray-painted on a stone wall. 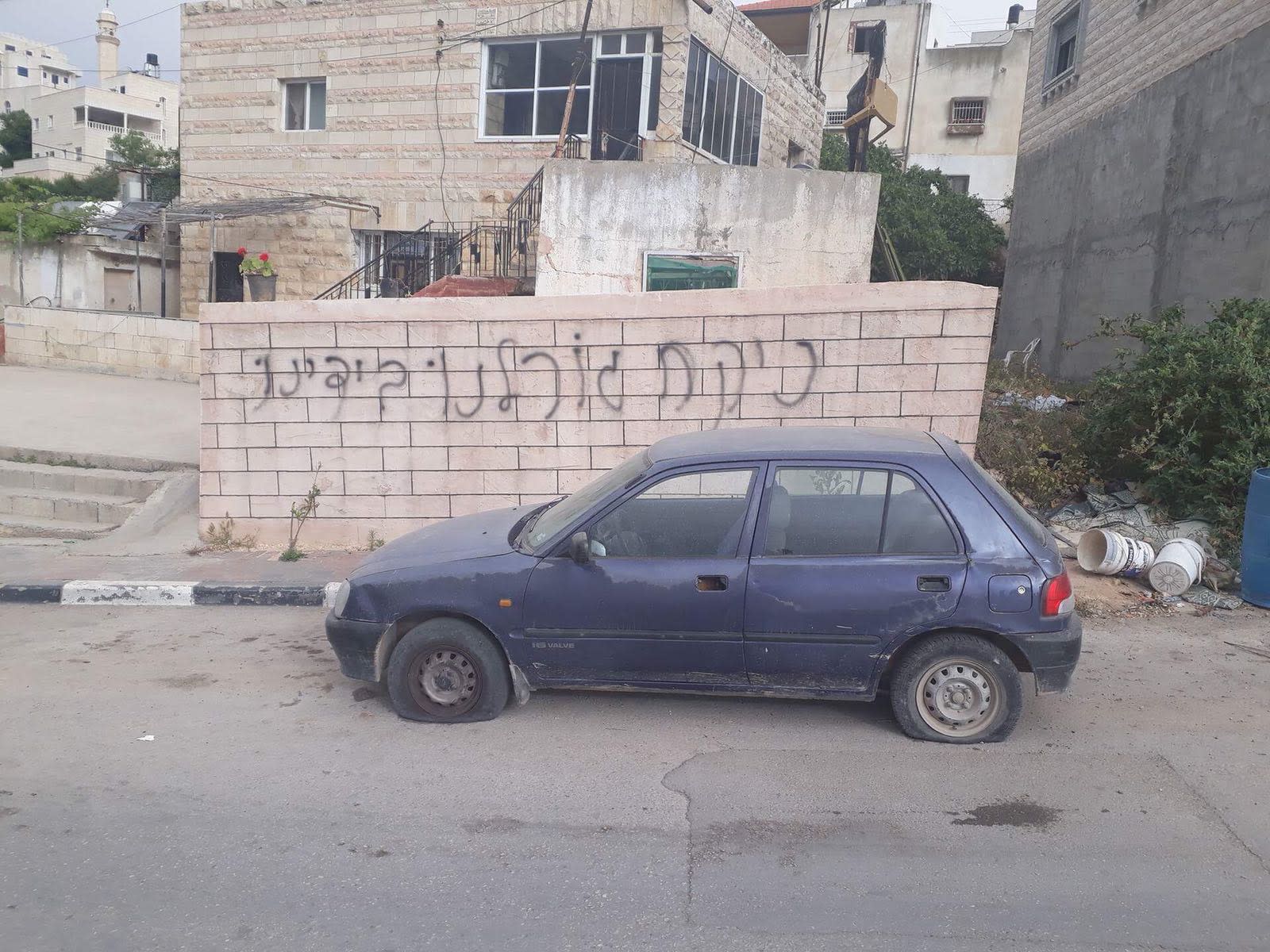 'Price tag' attack: "Let's take our fate into our own hands" spray-painted on a stone wall in the village of Dir Ammar in the Binyamin district (COURTESY POLICE SPOKESMAN’S UNIT)
The incidents come only a day after dozens of demonstrators gathered near the Prime's Minister's residence in Jerusalem to protest such attacks.Tuesday’s protest was organized by the anti-racism NGO Tag Meir. Protesters sprayed two walls with quotes – one with actual “price tag” messages, such as “kill or expel” and “revenge,” and the other with peaceful phrases, such as “we are all human beings” and “Jews and Arabs refuse to be enemies.”Peretz, who was among the attendees, urged the security establishment, including the Shin Bet (Israel Security Agency), to treat these incidents as terror attacks.“There is no other way to refer to it,” he said. “As we combat extreme Muslim terrorism, so should we fight them,” Peretz said. “They are doing everything they can to fan the flames...to spark a religious war – that, if started, could not be controlled. It will burn everything that we have built.”Peretz added that he asked Knesset Foreign Affairs and Defense Committee chairman Avi Dichter to call for an emergency meeting to discuss “these terrorist groups in Judea and Samaria that start with uprooting olive trees and end with hurting the holiest of holies of other people.“What can we say in light of the fact that we see that Jews are daring, in the name of our religion [to do such things]? If this is their God, then they are not worthy. This is not the God we follow; we want our religion to bring people together.”So-called “Price Tag” attacks have in the past been perpetrated by right-wing activists as revenge for Palestinian terrorist attacks or against Israeli authorities for carrying out actions perceived as being anti-settler in nature.Udi Shaham contributed to this report.