Walking the path of the Sanhedrin

Interactive hiking trail dedicated to the 71-member assembly to open in time for Independence Day. 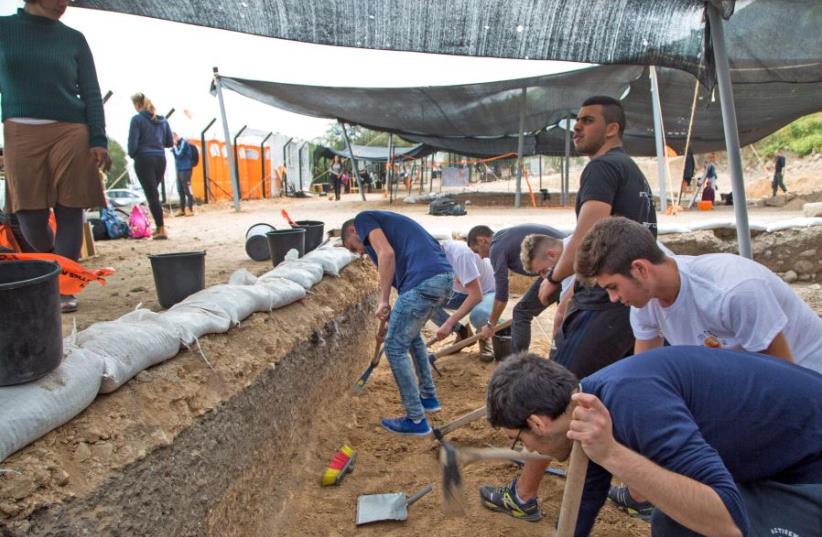 Students participating in archaeological excavations to prepare the Sanhedrin Trail
(photo credit: SHMUEL MAGAL/ISRAEL ANTIQUITIES AUTHORITY)
Advertisement
Thousands of high school students and volunteers have taken part in archeological excavations along the main corridor of the ancient Roman city of Tiberius to prepare the country’s first interactive hiking trail in time to celebrate 70 years of independence.The Sanhedrin Trail, which at 70 kilometers long is among the longest hiking trails in Israel, will be divided into five circular segments that can be traversed over the course of five days, the Antiquities Authority said on Thursday.The project was initiated by the authority, in coordination with the National Religious Education Administration of the Education Ministry.It is being financed by the Landmarks Project of the Jerusalem and Heritage Ministry, in conjunction with the councils and towns through which the trail spans.“The ‘smart trail’ will communicate with the hikers using an innovative, augmented reality-based application that will create an extraordinary and firstof- its-kind travel experience on the trail,” the Antiquities Authority said in a statement.“The application will enable the virtual reconstruction of heritage sites, will integrate figures that will guide the children along the trail, and will ‘bring back to life’ the Sanhedrin scholars and the sages of the period.”According to the authority, the Sanhedrin Trail will cross the Lower Galilee and include numerous sites inhabited during the time of the Mishnah and Talmud.“The activity of the Sanhedrin – the foremost body of Jewish leadership and supreme authority during the Second Temple period – was exiled to Yavne after the destruction of Jerusalem, and from there to the Galilee following the Bar Kokhba Revolt in 135 CE,” the Antiquities Authority said.“From the difficult identity crisis that the people experienced in the wake of the destruction of the Temple, and led by the 70 sages and president of the Sanhedrin, a renewed work of Jewish law, philosophy and culture was developed. The Oral Law was recorded for the first time, and the Mishnah and Talmud were written.”Moreover, as part of this activity, the Passover Haggada was also written, which cites the dialogue of a meeting of the members of the Sanhedrin after the destruction of the Temple in which they discussed the appropriate ways to mark Passover outside the ruined Temple, and delineated the new spiritual path of the people of Israel.Yair Amitzur, the IAA’s antiquities inspector for the Eastern Galilee and one of the initiators of the project, noted the powerful and enduring influence of the Sanhedrin sages.“People such as Rabbi Akiva and Rabbi Yehuda Hanasi, the members of the Sanhedrin who were active here 2,000 years ago, determined to a great extent much of how our lives are run today,” said Amitzur.“It is according to these religious laws that we marry or conduct funeral ceremonies, and even administer Jewish law. The establishment of the trail and walking on it will connect those who live here today with the atmosphere and frame of mind of that period.”Amitzur continued: “In walking along the Galilee trails while using the application that will be developed specifically for the sake of this project, the trail will afford visitors a learning experience about the Mishna and Talmud period, and connect them to the world of the sages who shaped Judaism in the religious houses of learning.”Antiquities Authority director Israel Hasson said the completion of the trail is scheduled to coincide with the nation’s 70th anniversary.“Tens of thousands of pupils and volunteers will bestow the respect due the Sanhedrin sages, and they will provide a spectacular and enjoyable interactive trail for tens of thousands of hikers that will connect the hikers to their past,” Hasson said.Tal Dothan, a student from Nir Galim who is participating in the Sanhedrin Trail initiative, said she enjoyed learning about the Sanhedrin sages outside the confines of a classroom.“We learn a lot in the classroom and at school, but in practice the studies only really sink in when you feel it; when you walk it,” said Dothan. “We come in order to prepare a trail for someone else; to open a section that does not exist – to pave a way for more people to walk on, and so that others can enjoy it.”Michal DeHann, a pedagogic deputy in the National Religious Education Administration, lauded the unprecedented project.“A student who excavates and exposes ancient remains, and receives an explanation about the finds, connects deeply to the continuity of our country’s life and heritage,” said DeHann.“The program offers significant extracurricular learning that exposes students to Jewish ideas, values and creativity.”As part of preparing the Tiberias segment of the trail, a visitor’s center will soon be built in the city which will afford the public an opportunity to better understand the project and participate in the excavations, while learning about the city’s ancient heritage.