Was former president’s early release a case of preferential treatment?

After around 10 years of denying all allegations, Katsav had expressed regret to the parole board behind closed doors. 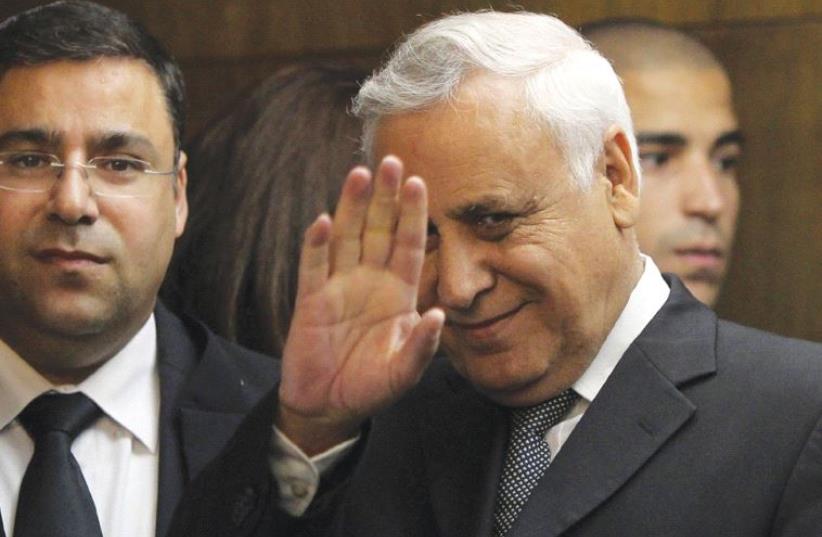 FORMER PRESIDENT Moshe Katsav waves to the press as he enters Tel Aviv District Court on December 30, 2010, to hear himself pronounced guilty of rape charges.
(photo credit: REUTERS)
Advertisement
The Parole Board’s decision on Sunday to grant an early release to former president Moshe Katsav, despite his lack of a public expression of regret for his acts of rape, has led to criticism that he received preferential treatment.Association for Rape Crisis Centers in Israel lawyer Liat Klein said that it is rare that convicted rapists who refuse to express regret get an early release. She said that usually expressing regret is considered a baseline for judging that a convict can be rehabilitated and rejoin society.Public defender Eti Rachamim, a criminologist, initially echoed Klein’s statement, saying that in “the vast majority of cases, parole boards automatically” reject requests for early release if unaccompanied by an expression of regret.However, Rachamim said there is a slight counter-trend where expressing regret “is not considered a deal-breaker” and that she personally knows of three such cases in the last three years.Rachamim praised this counter- trend, explaining that the more that rehabilitation and not retribution dictates policy, the less important a formal expression of regret becomes – if the convict is genuinely cooperating with a rehabilitation program.An advocate of restorative justice, which sometimes brings together convicts and victims as part of a healing dialogue, Rachamim said that sometimes special family and other issues prevent a convict from formally admitting fault, even if it appears clear to social workers that the convict has shifted to a healthier perspective.She also gave an example where she said a one-size-fits-all approach had a negative impact.Regarding one recent convict who had five months remaining on a 16-month sentence, she said that he had agreed to a rehabilitation program continuing even one year beyond his original release date, if only he could get an early release.His early release was denied for failure to express regret, and afterward he refused to entertain any further rehabilitation program at all, opting to serve out his sentence without rehabilitation.Rachamim called the parole board decision short-sighted, and claimed that at the end of the day, he would still eventually be released and be less rehabilitated than if he had been released a few months earlier.After her criticism of denying early releases absent an expression of regret, she said Katsav in any case did not fit into this category.After around 10 years of denying all allegations, she said Katsav had expressed regret to the parole board behind closed doors and did not need to do so publicly, even if that might be preferable.In contrast, Klein said, “I am in favor of rehabilitating convicts generally, and sexual offenders in particular. But the rehabilitation must be before they return to society, and not after. It is prohibited to return them to society…before the end of their sentence, when they have not already undergone a substantial rehabilitation.”Regarding Katsav, she added, “it is good that he has started to take responsibility and we hope that he continues with his rehabilitation process. Still, the expectation is that he will take responsibility in front of the public and express regret before his victims. They need this and the public needs this.”