It's Getting Hot In Here: Extreme heatwave expected across Israel

The Israel Nature and Parks Authority is telling people to avoid nature hikes in the coming days, as it closes certain trails due to the heat. 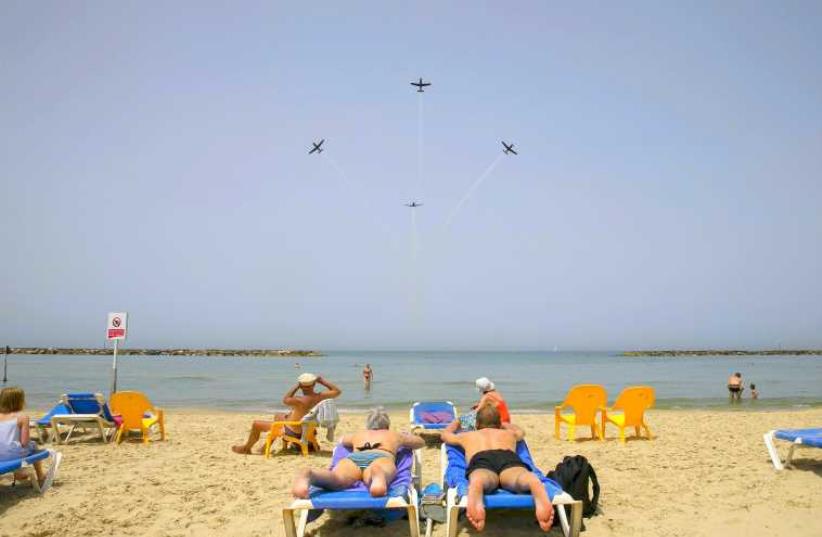 Beachgoers watch the Israeli Air Force Aerobatic team rehearse over the Mediterranean Sea in preparation for an aerial display on Israel's Independence Day in Tel Aviv April 20, 2015.
(photo credit: REUTERS)
Advertisement
An extreme heatwave is expected to hit Israel on Sunday and is predicted to last until Wednesday. Temperatures are expected to rise to over 30 degrees Celsius (86 degrees Fahrenheit) in the center of the country with humidity of approximately 80 percent. Meanwhile, the South could experience temperatures as high as 45 degrees Celsius (113 degrees Fahrenheit). Due to the incoming heat wave, the Israel Nature and Parks Authority announced that it would be closing down certain hiking trails around the country. "We recommend that you reduce your outings to hikes in nature in the coming days, and if you choose to travel anyway, take care in advance that the route is comfortable and shaded," the authority said. They told hikers to make sure to carry plenty of water and to bring a hat and clothing suitable for the heat.

At the end of May, a Spring heatwave saw temperatures rise to 44 degrees Celsius in some areas of the country, igniting fires that damaged several homes and infrastructural facilities. While temperatures fell dramatically shortly thereafter, reaching only high 20s or low 30s in most places, dust that accumulated prompted air pollution warnings around the country.