Why Trump won’t be able to land helicopter on Masada

Trump will by no means be the first dignitary to take the cable car up the mountain. 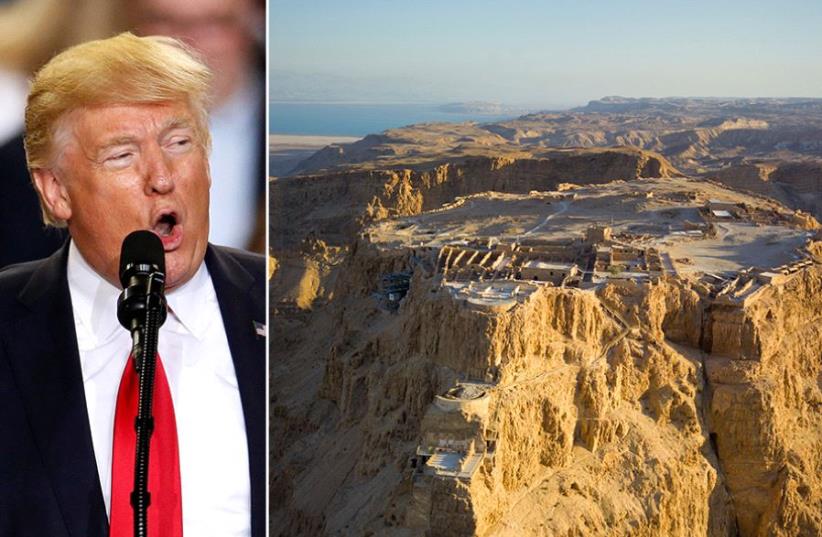 Trump and Masada
(photo credit: REUTERS,ANDREW SHIVA / WIKIPEDIA)
Advertisement
Despite reports that Donald Trump will be landing a helicopter on Masada during his Israel trip next week, the US president will need to take the cable car to the top of the ancient fortress just like normal tourists.“The Americans will land in the Bar Yehuda landing strip,” Eitan Campbell, director of Masada National Park, told The Jerusalem Post on Monday. “They will go up to the mountain by cable car.”The Bar Yehuda Airfield is located about 3.5 km. northeast of Masada, adjacent to the Dead Sea. While for many years, the Israel Nature and Parks Authority did allow helicopters to land on top of the fortress, Campbell said that in the 1990s, he and his colleagues decided to ban the activity after consulting with a number of experts.“It created damage to the antiquities,” he said.In 1997, an Israeli Air Force helicopter landed in the middle of Masada, one of Israel’s most ancient and famous archaeological parks. It was carrying then-US Air Force commander Gen. Michael Ryan who had asked to visit the fortress, a recognized UNESCO World Heritage Site.But when the helicopter landed, it threw up far more than just sand and dust. Signs blew off their posts and the wind caused by the helicopter’s powerful propellers caused damage to the ruins.It was the last time a helicopter was allowed to land in the middle of Masada, the fortress built by Herod the Great that overlooks the Dead Sea on the edge of the Judean Desert.Since then, the only plane on Masada was a Cessna light aircraft that accidentally crashed into the site in 2006.Otherwise, landing on Masada has been banned.Campbell stressed, however, that he would allow for a helicopter landing at the site if an emergency occurs.Trump will by no means be the first dignitary to take the cable car up the mountain. In 2008, when president George W. Bush visited Masada, he took the cable car up to the mountain, which he then toured with prime minister Ehud Olmert. When president Bill Clinton visited the site 10 years before, his trip was even more challenging.“When Clinton visited in 1998, he came up with the old cable car and walked up 100 steps,” Campbell told the Post. “George W. Bush came by the new cable car. We were saved the 100 steps.”