A close aid to Democratic presidential candidate Hiillary Clinton can be seen offering advice on a multitude of complicated topics concerning Netanyahu and the challenges Israel faces. 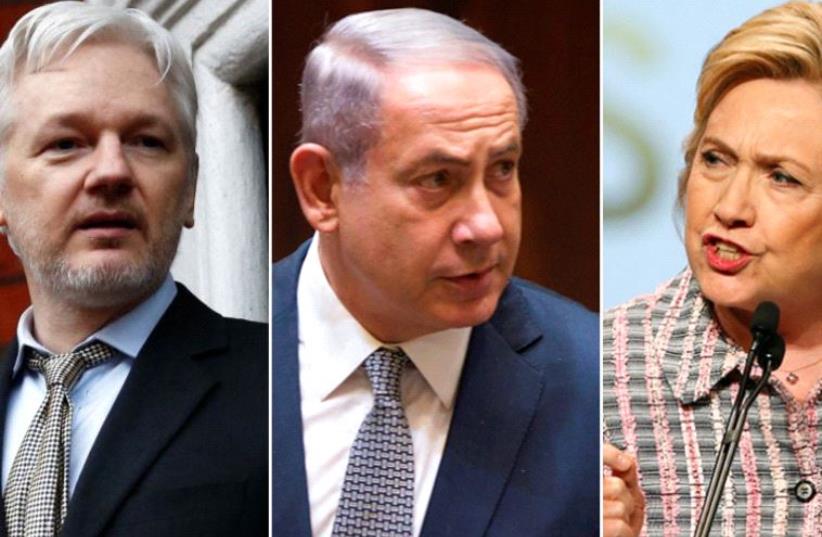 Julian Assange, PM Netanyahu and Hillary Clinton
(photo credit: REUTERS)
Advertisement
WASHINGTON – Israel is concerned that Hillary Clinton will fill her administration if elected president with former staffers of Barack Obama who allegedly played a role in the deteriorating ties between the countries over the last seven years, according to email correspondence released by Wikileaks over the weekend.In one email, Stuart Eizenstat, a former US diplomat, detailed to top Clinton adviser Jake Sullivan a meeting he had with Israel’s ambassador to Washington, Ron Dermer, focused on the emerging Iran nuclear deal to be reached later that summer. Dermer allegedly expressed understanding that Clinton had no choice but to embrace the deal. “She should not get too invested in it,” he reportedly said, advising her to “list the concerns” she has with it.And asking for a “close hold” to privacy in another 2015 email, Eizenstat said that, speaking with an unnamed “senior Israeli official,” he was told that Netanyahu feels he has a “surprising good relationship” with Clinton and that she is “easy to work with.”Eizenstat wrote that the Israeli official he met was very close to Netanyahu and “wonders if a Clinton administration ‘will be a Saban Forum for four years’, due to ‘the people around her, but not her.'”“Saban Forum” was a reference to an annual elite gathering of primarily Democratic officials hosted in Washington DC by top Clinton donor and Israeli-American billionaire Haim Saban.The leaked batch of emails also revealed Clinton was personally asked to sign off on documents that would ultimately be presented to the press on her “pro-Israel” credentials, in a chain with the subject line: “Re: Hillary Clinton to Jewish donors: I’ll be better for Israel than Obama - POLITICO.”Israeli officials declined to comment for this report.In the conversation with Eizenstat on Iran, Sullivan considered what options were on the table for the next president once the nuclear deal enters its final years. The agreement puts restrictions on Iran’s nuclear program for 10-15 years, after which time Tehran will be allowed to grow its nuclear infrastructure to an industrial scale.“Congress should pass additional sanctions after an agreement that could be imposed by a future president following the 10-15 year expiration period of the agreement, if Iran seeks a ‘breakout’ at that point,” Eizenstat wrote to Sullivan in March of 2015, when a framework for the agreement was being negotiated in Switzerland.“In other words, one major flaw in the emerging agreement is that Iran would be free of constraints after the period,” Eizenstat continued. “She should take the position that unless Iran radically changes its posture over this period of time, the US should never allow Iran to become a nuclear weapons state, as North Korea is now.”Eizenstat in subsequent emails referred to Iran under the deal as a “nuclear capable state,” a term which Sullivan did not object to.“What would those sanctions look like?” Sullivan asked in response. “If Iran actually tried to break out at the end of the period, ostensibly we’d be talking about military action?” Eizenstat advised Sullivan that the ultimate agreement would likely break “in Iran’s favor” in several key respects, and advised him to craft Clinton’s endorsement of the deal with a host of caveats.Many of Eizenstat’s suggestions were adopted, including that Clinton endorse the deal as a “lid” on Iran’s nuclear program – but not as a permanent solution – and that she invite Prime Minister Benjamin Netanyahu to early talks at the White House should she win the presidency. Sullivan was amenable to many of his criticisms of the agreement, while he feared a tepid endorsement would give the impression she was trying to “have it both ways.”Sullivan and Clinton both initiated diplomacy with Iran in secret, and were key architects to an international sanctions regime largely credited for bringing Iran to the negotiating table. But neither of them were present for the ultimate negotiations, held by US Secretary of State John Kerry and Undersecretary Wendy Sherman.Sherman also serves as a top foreign policy adviser to the Clinton campaign.