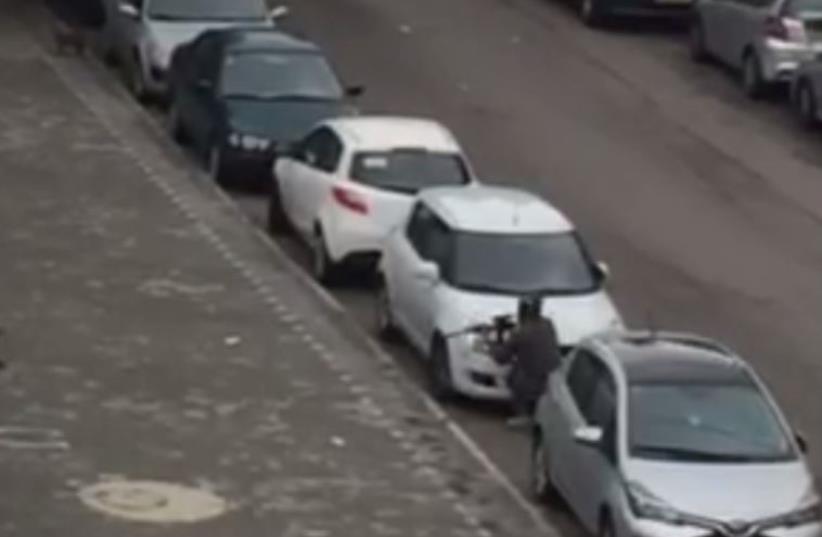 Police search for Tel Aviv shooting suspect in Bat Yam
(photo credit: screenshot)
Advertisement
A high-speed car chase by police pursuing a fleeing motorist Saturday morning in central Israel led to a collision that left five people hospitalized, when a Palestinian man ran through a police checkpoint and drove the wrong way up a highway exit ramp in an attempt to escape officers.Police said the chase began Saturday morning in Givat Shmuel, where officers had set up a roadblock to check motorists. The driver refused to stop at the checkpoint, police said, and officers began to pursue him as he fled.An officer who ran the car’s license plate saw that it belonged to a woman from east Jerusalem, leading police to suspect that they could potentially be facing a security incident or a possible terrorist attack in the making.With the cops trailing him, the driver began speeding the wrong way up an exit ramp on Route 4 in Petah Tikva, where a pursuing officer hit two approaching cars head on. The police officer was moderately injured in the collision, as were four civilians.Magen David Adom paramedic Avichai Hadad said there was a woman in her 40s with severe head injuries sitting in one vehicle on the side of the road, along with a man in his 50s suffering from moderate injuries to his limbs.In another car, Hadad said paramedics found two men in their 20s suffering from moderate head injuries. Hadad said the woman was unconscious and placed on a respirator and taken to the Sharon Hospital along with the other victims.Despite the collisions, the fleeing driver managed to get away, though a few hours later he turned himself in to police. The driver was described by police as a 52-year-old resident of Bethlehem.The owner of the vehicle was also taken for questioning by police, who are investigating why the man ran the checkpoint to begin with.