Will a Palestinian museum in Israel break ground?

Establishing a permanent home for Arab-Israeli and Palestinian art has been a lifelong goal for Abu Shakra, who comes from a family of well-established artists in Umm al-Fahm, an Arab city in northern Israel located hundreds of meters from the West Bank border. 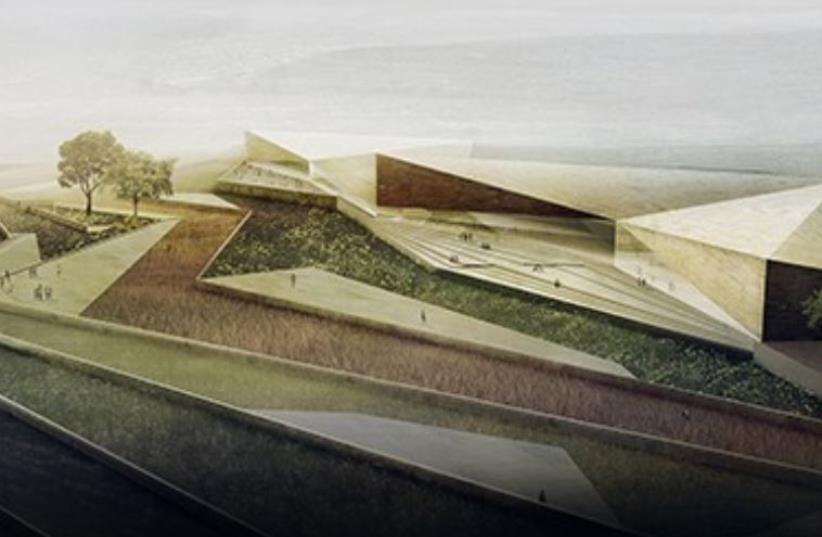 The Palestinian Museum building is nestled among Birzeit’s rolling hills and cascading terraces.
(photo credit: THE WELFARE ASSOCIATION - THE PALESTINIAN MUSEUM)
Advertisement
Said Abu Shakra has a vision: To build the first museum dedicated to contemporary Palestinian art in Israel. To this end, he recently began working with architects with a view to breaking ground on the project in the near future.Establishing a permanent home for Arab-Israeli and Palestinian art has been a lifelong goal for Abu Shakra, who comes from a family of well-established artists in Umm al-Fahm, an Arab city in northern Israel located hundreds of meters from the West Bank border.As part of this ambitious long-term project, in 1996 he founded the Umm al-Fahm Art Gallery, the first space of its kind dedicated to contemporary Arab and Palestinian culture. Sculptures, videos and row upon row of colorful paintings line the walls of the multi-storied space, which also doubles as a meeting point for Jews and Arabs.“This gallery is one of the only art centers in the entire Arab sector in Israel,” Abu Shakra told The Media Line. “There are roughly two million Arab or Palestinian residents in Israel and there are almost no other art galleries.”The space also includes works by some Jewish-Israeli artists that have participated in exhibitions that align with the institution’s wider goal of promoting inter-cultural dialogue. This idealistic mission was advanced with the help of Yoko Ono, who played a significant role in bringing the gallery international recognition nearly 20 years ago.“In 1999, she had a solo exhibition here,” Abu Shakra recounted to The Media Line. “It was truly an experience for her, Umm al-Fahm and Israel. The exhibition was named ‘Open Window,’ which symbolizes communication, opening a window to dialogue, and collaboration between all the different sectors in Israel.“Yoko Ono’s exhibition name has remained a source of inspiration for us ever since,” he added.For several years, Abu Shakra has worked tirelessly to secure millions of dollars in funding in order to build his museum, although he has encountered several obstacles along the way.“On the Jewish side, some people are scared,” Abu Shakra explained. “They worry that if a Palestinian museum is established then it will act against the State of Israel.”‘BDS works against us’ On the Palestinian side, some also question Abu Shakra's motives.“Palestinians find the idea of establishing a museum here hard to accept because it would be built inside of Israel and it would receive state funding,” he noted. “Everyone thinks that if I receive state funding then I’m a traitor. I’m not a traitor: I’m citizen of Israel and I’m actually trying to get a bigger budget based on the taxes I pay. If I don’t receive money from Israel this place cannot continue to exist.”The problem of securing financial backing even extends to foreign Arab donors, who pulled out of the project after learning that the museum would be reliant on state funding.“We are punished by the Boycott, Divestment and Sanctions (BDS) movement just as all other institutions inside Israel are punished,” Abu Shakra revealed to The Media Line. “Nobody is prepared to work with us because we are an institution within Israel. BDS works against us.”The campaign has drawn criticism for other reasons as well, with some questioning whether a museum expressly dedicated to Palestinian art is needed at all. Many have compared the proposed building to the Palestinian Museum in the West Bank city of Birzeit, a grandiose $24- million modern institution which opened in 2016 but which remained empty for over a year because it did not have anything to display.“The museum that was built in Birzeit is an important endeavor and a very significant step forward for Palestinians everywhere,” Abu Shakra affirmed. “Unfortunately, there has been a lot of criticism about this establishment because it did not have a proper collection, whereas we have a collection but no museum. Still, the more museums we have, the better.”Friends and fellow art lovers recently held a special fundraiser in Jerusalem to help Abu Shakra pay the museum’s architects and finally get the initiative off the ground after years of delays.“[Abu Shakra] is in Israel, he wants to be in Israel, he wants to work in this environment and I really want to support people like him,” Diana Lipton, one of the fundraiser's organizers and a professor at Tel Aviv University’s Department of Biblical Studies, conveyed to The Media Line.“People here really do live in small communities and bubbles basically, and they have very strong feelings, fears and stereotypes about those who aren’t in their immediate sphere. I think that’s really tragic.”With preliminary planning already in motion, Abu Shakra is still millions of dollars short of laying the museum’s first stone.“Theoretically, we might have nearly $11 million if we receive funding from the Umm al-Fahm municipality as well as from the Ministry of Finance,” he concluded. “We will then be able to begin building the 43,000-square-foot museum.“There is still no contemporary Palestinian art museum within Israel. Once it is built, it will be the first of its kind.”For more stories go to www.themedialine.org