The Mark of Shame campaign’s aim is to lead to a change in the presentation of the female body in advertising and to raise awareness of the social damage advertisements can cause. 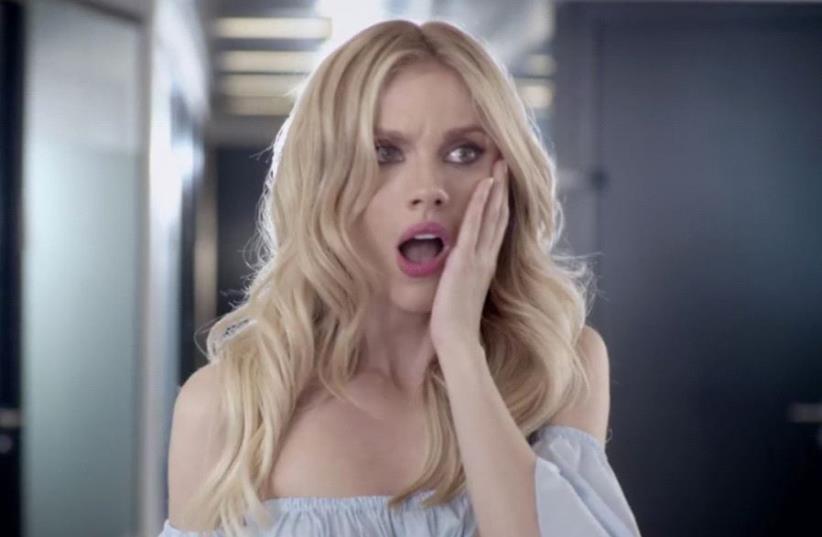 Maelys facial cream commercial
(photo credit: PR,screenshot)
Advertisement
The Women’s International Zionist Organization (WIZO) named an Israeli television commercial for Maelys facial cream as the most sexist advertisement of 2016, earning it the organization’s Mark of Shame on Tuesday.
Maelys facial cream commercial (FIRMA Creative Production)
This is the ninth year that WIZO has named television and print advertisements that depict women in a negative or derogatory fashion, announcing the results ahead of International Women’s Day, which is observed annually on March 8.
The Mark of Shame campaign’s aim is to lead to a change in the presentation of the female body in advertising and to raise awareness of the social damage advertisements can cause when negatively exploiting it.The Maelys campaign shows four well-known Israeli models and reality television stars – Bar Paeli, Shiraz Tal, Ruslana Rodina and Doron Matalon – competing and cat fighting for the coveted role of the brand’s new presenter. The women throw insults at each other and continuously slap each other before the company deems them “worthy” of trying on their new facemask.“The advertisement uses ‘known’ women in a manipulative way as ready to fight, whom they pit against each other for reasons concealed from them that serve the adman,” said WIZO Israel chairwoman Gila Oshrat.The winning ad was chosen by a jury of gender and communications experts, female academics, journalists and legal experts.The runner-up commercial was for Osem salads, in which a woman is seen standing in a kitchen preparing salad for a television show. Every time she says or does something incorrectly she receives an electric shock and as the commercial progresses she becomes flustered and frightened. The jury said the commercial was “extremely violent, even sadistic and harmful to human rights.”The third most sexist advertisement was for the Mivneh Shopping Center, in which a woman presents a man in his “natural habitat” – sitting on the couch, eating and playing video games. She explains that he was supposed to go shopping for presents but “forgot.” Luckily for him, she explained, Mivneh Shopping Center makes it easy “even for a man” to shop.The jury explained that the commercial enhances age-old stereotypes depicting incapable men being dominated and forced to do things by catty women.Supermodel Bar Rafaeli’s commercial for Carolina Lemke Berlin, in which she is seen dancing and twerking in provocative clothing while wearing sunglasses came in fourth place. The fashion brand is regularly featured among the list of the most sexist commercials every year.Closing out the list was the ad for Colon laundry detergent starring Israeli singer Shimi Tavori and his wife Yehudit Bauman, in which they advertise a new detergent strip which is “so easy even a man can use it.” Again, the jury said the commercial perpetuated stereotypes and gender roles.“The impact of advertisements is not just about our spending habits, but the damage is mostly regarding our thought patterns, norms, and patterns of behavior between the sexes,” Oshrat said.“Advertisements negatively use the female image and body distorting the perception of reality,” she added, saying that “It is possible to use gender motifs and simultaneously uphold the principles of just and fair advertising.”