Women may soon serve as legal advisers to rabbinical courts

By JEREMY SHARON
AUGUST 23, 2016 17:55
Haredi political rally in Bnei Brak, March 11, 2015
(photo credit: MARC ISRAEL SELLEM)
Advertisement
Efforts to increase the participation of women within the rabbinical court system were given a boost in recent weeks after the state indicated its willingness to appoint women to serve as legal advisers to rabbinical courts.At the end of 2015, the religious services advisory and lobbying group (ITIM) together with the Rackman Center for the Advancement of Women at Bar-Ilan University filed a legal petition in the Jerusalem Labor Court asking the state why there are no women serving as rabbinical court legal advisers.Legal advisers to the such courts advise the judges on aspects of civil law concerning the cases coming before them and can have a direct impact on the verdicts themselves. 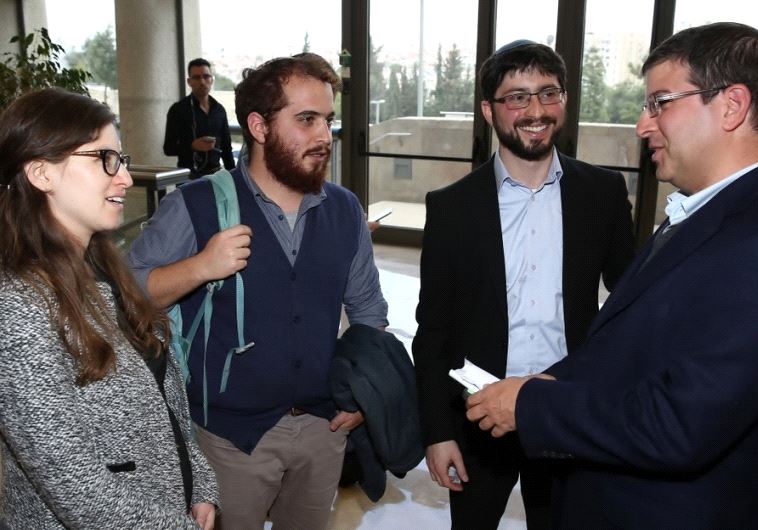 ITIM director Rabbi Seth Farber, Attn. Elad Caplan, Ariel Moav, Attn Sara Weinberg. (ITIM)They are seen as being a critical component of the legal decision-making process within the courts, and activist groups argue that the lack of women in such positions is detrimental to the fair treatment of women in the rabbinical courts.All 12 of the regional rabbinical courts as well as the Supreme Rabbinical Court employ legal advisers for each of their judicial panels, and although the position has been technically open to women since 2007, a woman is yet to be appointed to fill this role in any of the courts.One of the main reasons identified for the failure to appoint female legal advisers was that the job tenders published by the Religious Services Ministry for such positions were done internally within the ministry and the religious establishment and not publicly.Since there are no women with the requisite qualifications serving in the ministry and in the rabbinical courts administration, qualified women were never given the opportunity to apply for the positions.In order to serve as a legal adviser to a rabbinical court, a candidate must be qualified as an attorney, while also having a qualification to serve as a rabbinical courts advocate or have a master’s degree in Israeli law.Women have been able to serve as rabbinical court advocates since the mid- 1990s.In addition, the position of legal adviser is often a stepping stone to a position as a rabbinical judge on the courts, which women are barred from and are therefore eagerly sought by men who use their connections in the religious establishment to advance their application.To counter these concerns, ITIM and the Rackman Center requested in their petition that the court instruct the Religious Services Ministry to make public all tenders for rabbinical court legal advisers in the future.In addition, the petition requested that the court obligate the ministry to issue a designated tender for a female legal adviser to appoint a woman to such a position in any of the rabbinical courts in the immediate future.The state said in its response to the petition, which was made public this week, that a meeting was held to address the issue between one of the deputies from the Attorney General’s Office and representatives from the Rabbinical Courts Administration, the Civil Service, the State Attorney’s Office and the Equal Opportunities Commission.The state’s response added that it was working on ensuring that the tenders would be made public in the future It also ostensibly gave backing to the idea of a designated tender for women and was working on “resolving the situation in which no women are serving in the position in question, or in similar positions, in the rabbinical courts.”Attorney Elad Caplan of ITIM said the state’s response indicated the issue is being taken seriously and expressed confidence that at least one woman may now be appointed as the first female rabbinical court legal adviser in the near future.It is understood, however, that officials in the Rabbinical Courts Administration are still reluctant to make such appointments, and the guarantee that tenders will now be made public is no guarantee that women will actually be hired.“The Rabbinical Courts have jurisdiction over the fate of thousands of women, including those denied a divorce and agunot, yet women are excluded from all positions of power in the rabbinical courts,” Caplan said. “Appointing women as legal advisers is a fundamental step required to do justice and change this ongoing discrimination. As long as there are no women serving as female rabbinical judges, then we should at least have female legal advisers, which is a widely accepted concept from a Jewish law perspective.”Keren Horowitz, the head of public policy at the Rackman Center, said: “As a result of our legal action, the state has acknowledged for the first time that the reality in which women are not legal advisers or hold any other significant position within the Rabbinical Courts must be changed.We hope this will lead to swift change.”