“One of the things that has enabled World ORT as an institution to exist for 140 years,is its ability and its requirement to adapt to the environment around it."

By ALAN ROSENBAUM
HARD AT work on a robotics project: World ORT students in Dimona.
(photo credit: WORLD ORT)
Advertisement
‘If we are really placed here as individuals to help repair the world,” says Dr. Conrad Giles, president of World ORT, “what better way to do that but by educating individuals and permitting them to be as productive as possible?”
Giles, mild and soft-spoken, is firmly committed to the concept of tikkun olam (repairing and improving the world) via World ORT’s worldwide educational programs, which have been a vital part of the Jewish world since 1880.
This year, World ORT is celebrating its 140th birthday, and though it has postponed its general assembly, which was scheduled to be observed in Jerusalem in May, because of the spread of the coronavirus, its accomplishments are not diminished in any way by the postponement of the celebrations. Giles notes that, in a way, this typifies ORT’s adaptability.
“One of the things that has enabled World ORT as an institution to exist for 140 years,” Giles says wryly, “is its ability and its requirement to adapt to the environment around it. As the Jewish people, we have not controlled our destiny. We have had to respond to the environment in which we found ourselves. It’s what caused us to originate the organization in Russia. We were thrown out from Russia in 1938 (due to the Stalinist purges). It is that kind of adaptability that involves our modification, because of the environment in which we find ourselves, of the 140th anniversary celebrations. Once again, we will have to adapt what is presented to us rather than to follow through on plans we might have had on the table.”
Indeed, with many of its schools around the world shutting down in the past two weeks in response to the crisis, World ORT is once again putting its innovative mettle to the test and rolling out online distance-learning opportunities for its students.
RECALLING WORLD ORT’s history since its beginnings, Giles says, “In this path of 140 years, the pathways that Jews have taken have been determined by the world around them.”
In 1880, the world Jewish population numbered 7.7 million, and the vast majority – over 88% – lived in Europe, with more than five million living in Russia. Most Russian Jews were forced to live in the Pale of Settlement, a western region of imperial Russia, where they had been confined since 1794. They were restricted to specific professions, were heavily taxed and lived in great poverty.
Nikolai Bakst, a professor at St. Petersburg University, together with Samuel Poliakov, a Jewish railroad entrepreneur, and Baron Horace Gunzburg, a founder of the St. Petersburg Jewish community, petitioned Tsar Alexander II for permission to start an assistance fund to improve the lives of the millions of Russian Jews. The fund would provide education and training in practical occupations like handicrafts and agricultural skills and would help people become more self-sufficient. Alexander II granted permission, and World ORT began training Jews throughout the Russian Empire, initially providing training in sewing, gardening, glassblowing and furniture design.
As the world changed, World ORT adapted, and in the early 1900s began training workers in electrical and automotive work. World ORT gradually expanded throughout Europe, and the organization’s headquarters moved to various European capitals, first to Berlin in 1921, and later to France, Geneva and then London.
Amazingly, explains Giles, World ORT was able to continue during World War II, in a number of different countries across Europe, including those under Nazi occupation, and providing educational programs in Hungary and Romania as well as in Berlin, the Warsaw Ghetto and in internment camps in France.
“They continued to function under the most difficult of circumstances even during the war,” he says. At war’s end, World ORT established rehabilitation camps in the DP (Displaced Persons) camps in Europe, and with the founding of the State of Israel, World ORT helped the new state develop the country’s workforce, by assisting in training skilled workers in industry and agriculture.
Beginning in the late 1940s and early 1950s, World ORT expanded into North Africa, and initiated activities in Algeria, Morocco, and Tunisia, as well as in Iran and India. In addition, the organization provided assistance to Jews who had fled to France from North Africa during the 1960s. Today, in 2020, 140 years after its founding, it reaches more than 300,000 individuals per year – on five continents, in more than 30 countries, emphasizing science, technology, engineering and math (STEM) skills, which are essential in today’s hi-tech business environment. 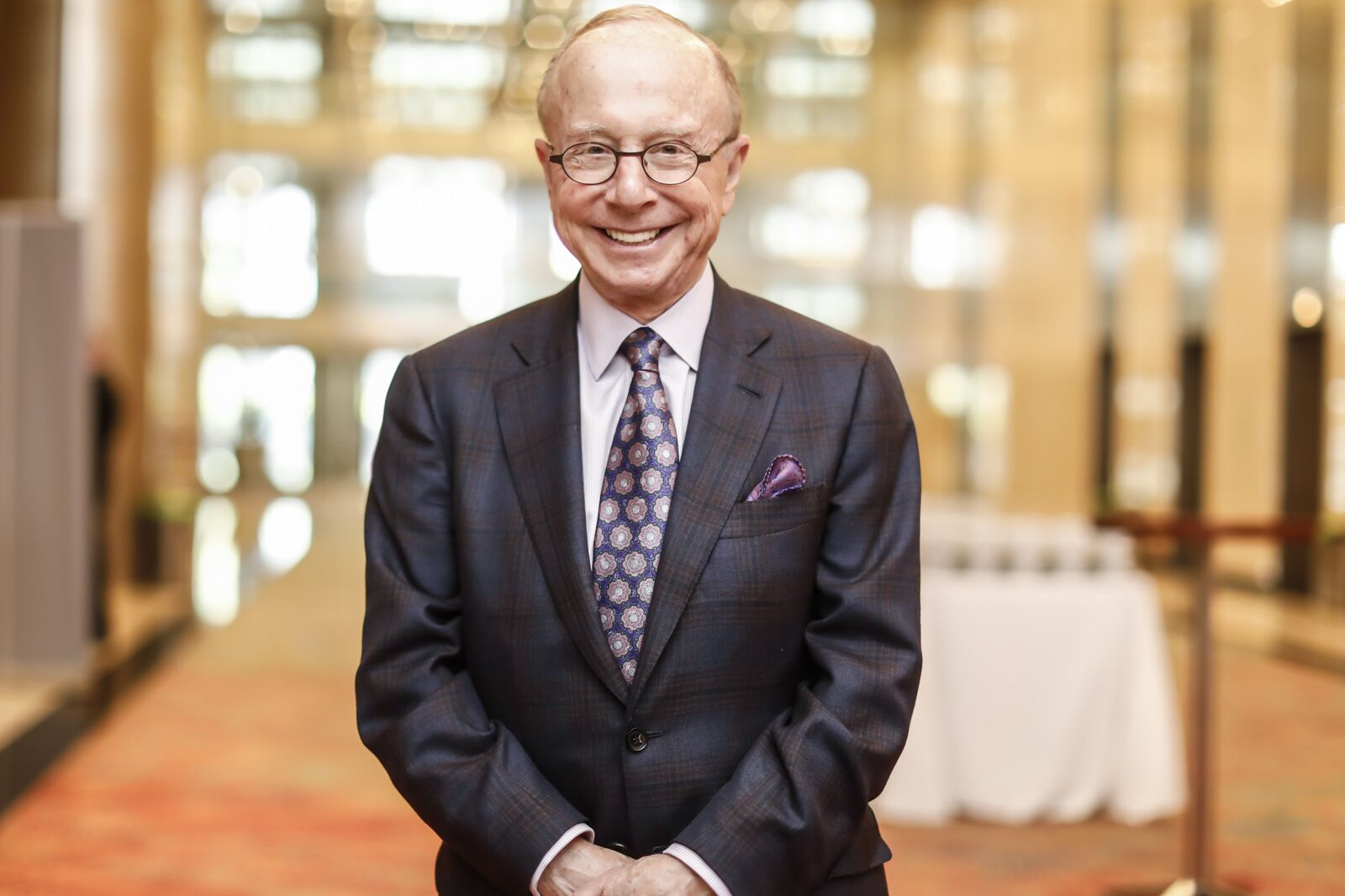 Dr. Conrad Giles, president of World ORT (World ORT)
GILES, WORLD ORT’s president since 2016, is a prominent pediatric ophthalmologist whose interest and appreciation for the value of education began at an early age.
“When I get up in the morning and go into my office to see the children, I remember my mother’s joy in educating youngsters, as a kindergarten and first grade teacher, and later as a principal. The whole concept of education as a central part of my life has always been there.”
He has been deeply involved in the Jewish community, both in his home community of Detroit, Michigan, and on a national level for much of his adult life. Speaking of his affinity for the organization, Giles says, “It is an interest in Jewish life writ large and the impact and importance of Jewish education as a segment of that life. It is clearly an area that I have interest in and could have impact in, and it has continued to motivate me in the work that I have been doing in the last number of years.”
Giles confesses that leading a complex organization such as World ORT and becoming involved with financial issues and other aspects related to its day-to-day running can distract him from the organization’s ultimate purpose.
“When you talk about an institution, it is in the abstract,” he says, “but when you see the individuals who are impacted by this and how they relate to this and if you have the opportunity to go to a World ORT school and speak to the youngsters – that’s when it has meaning. That’s what gives energy to those of us who get involved in it.”
Beginning his second four-year term as World ORT president, Giles has an ambitious set of goals for his next term.
“Our first goal is to have a firm financial base, from which we can thrive and grow,” he explains. World ORT is dependent on funding from Canada, Switzerland, the United Kingdom and the United States, and the Jewish Federations of North America are one of its primary sources of funding.
“Funding for overseas activities,” says Giles, “has become far less attractive to the Federation system. Only if we have a firm financial foundation can we execute our plans to expand our activities.”
World ORT is planning on expanding its educational activities in Israel, both to make it more attractive as a source of funding for donor countries, and to improve Israel’s educational standing.
“Recent analyses of the educational system in Israel have not been terribly optimistic. In spite of our ‘startup nation’ phenomenon, among OECD countries, we are doing abysmally in mathematics. Our obligation as an organization is to expand activities there, because we know they are successful.”
Giles points to the successes of existing World ORT schools in Israel, where the passing rate of students in the bagrut tests (high school matriculation exams) has increased greatly.
“Once we can build that network,” he says, “it will commit us to have a firmer financial foundation to let us do things outside of Israel using the attractiveness of funding activities within Israel to permit us to expand to other areas around the world.”
Giles’s third goal is to continue the organization’s activities in the Former Soviet Union (FSU).
“This is central in my view to our activity, because without Jewish schools in those communities – and we are the largest network there – we will see a disappearance of Jewish life within the decade. We are the only schools that educate Jewish children non-halachicly, and when we consider the intermarriage rate in those countries, it is clear that we are the school of last resort.” World ORT has a network of 17 schools throughout the FSU.
Finally, Giles wants to strengthen World ORT’s network of schools around the world, to insure Jewish identity among Jewish communities worldwide.
“There is a need and a desire for schools with small Jewish populations to obtain their Jewish education. They have a sense of isolation, which is in part relieved by a network of educational institutions as part of their overall programming.”
Recently, World ORT has affiliated with schools in Colombia, Singapore, and Madrid, and deals with the challenges of maintaining the worldwide network in countries with political and financial instability.
DESPITE THE postponement of the festive quadrennial that had been scheduled for this May, World ORT will be releasing a documentary film that traces the history of the organization over the past 140 years, and its impact on world Jewry, along with a “Faces over 140” social media campaign with anecdotes and illustrations testifying to its successes.
“It’s estimated that approximately three million people have had their lives impacted by World ORT since 1880,” explains Dr. Giles. “The impact of that World ORT education in various countries, such as the Former Soviet Union, Israel, and around the world, will be featured.”
How will World ORT remain relevant for the next 140 years? Dr. Giles says that its ability to present curricula that are relevant for the times is key to its survival.
“We are not teaching people to plow fields. We are teaching them to build computers. World ORT remains relevant because its pedagogy evolved over the last 140 years. That is one of the central functions of World ORT in London. Its team of educators are continuing to innovate.”
Despite the immense tasks and challenges, Dr. Giles remains optimistic.
“When people say that the educational needs of the Jewish world are infinite, we let ourselves off the hook. They’re not infinite. They are finite. We know what we need to do. If we say that they are finite, then we are driven to attempt to complete that goal. Part of tikkun olam – repairing the world – suggests that it’s not necessary that we complete the job, but we at least have to start it. The goals that I have presented are all doable. I know that we have the will.”
This article was written in cooperation with World ORT.