Women of the Wall demands police protection from assault

In its letter to the Attorney General, WOW demanded that he instruct Halevi and police personnel at the Western Wall to protect WOW worshipers and their right to pray at the site. 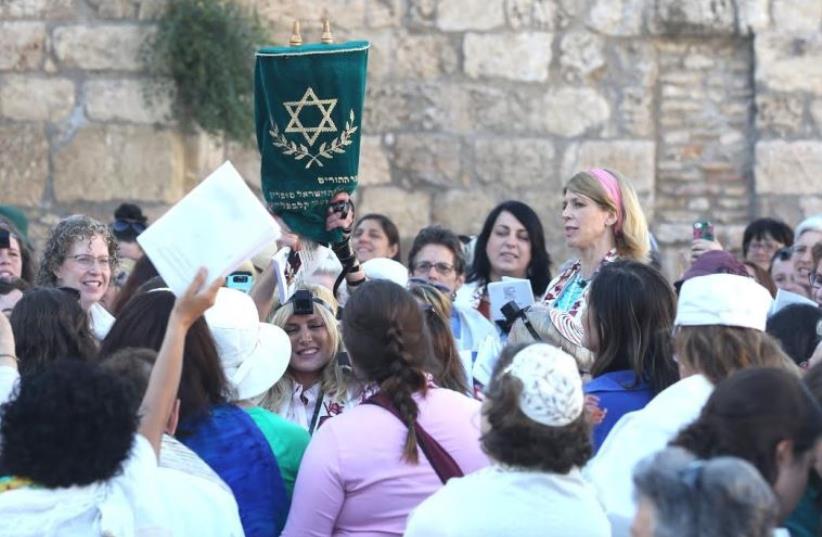 Women of the Wall demonstration at the Western Wall in Jerusalem, July 7, 2016
(photo credit: MARC ISRAEL SELLEM/THE JERUSALEM POST)
Advertisement
The Women of the Wall organization has sent an urgent letter to Attorney-General Avichai Mandelblit demanding that a new police policy seemingly in place at the Western Wall be revoked.In the letter, Women of the Wall drew attention to their prayer service in the women’s section of the Wall on August 5, when haredi women physically attacked and verbally abused the participants throughout its duration.WoW said that one of its board members was punched, while other protesters incessantly blew whistles in the ears of those praying, threw empty water bottles at them and sprayed water at them during the two-hour duration of the prayer service.The group said that they met “unprecedented” levels of violence and aggression during the service, and that its male supporters praying outside the women’s section were also physically assaulted.According to WoW, the police asked the haredi women once to stop their attacks, and when they refused, police told the service participants that they should direct their complaints to attendants at the site employed by the Western Wall Heritage Foundation.The attendants asked the female protesters to cease their harassment but again they refused and the attendants declined to intervene further.WoW subsequently sent a letter of complaint to Jerusalem police chief Yoram Halevy on August 12 about the incident, stating that it constituted a dereliction of their duty to enforce the rights of worshipers, and those of WoW in particular, to pray without hindrance at the Western Wall.WoW specifically referenced the 2013 Jerusalem District Court ruling by Judge Moshe Sobel which upheld the rights of WoW worshipers to pray in accordance with their customs at the site.Halevy did not respond to the letter but did meet with WoW chairwomen Anat Hoffman on Tuesday this week.According to WoW, Halevy said that it is the responsibility of the Western Wall Heritage Foundation attendants to ensure order at the prayer site, and that the police would not intervene in incidents there but would instead give instructions to the attendants.Halevy said at the meeting that the police would intervene only if a criminal incident is perpetrated, WoW stated.In their letter to the attorney-general, Women of the Wall wrote that there had been “a dangerous escalation” in various attacks and abuse directed at WoW worshipers, and despite their concerns for their safety, Halevy told Hoffman the police would not intervene in proceedings at the site at the WoW prayer service scheduled for this Sunday.A police spokesman denied that the policy implied the police would not protect WoW worshipers, and said that Halevy had told Hoffman at the meeting that the police are responsible for any physical danger to all worshipers at the site.He repeated, however, that the police would intervene only “if there is a criminal act,” adding that “not all incidents require a person to be arrested or detained.”WoW claimed in its letter to the attorney-general that the forms of abuse its worshipers experienced during the prayer service on August 5 do indeed violate clause 378 of the criminal code, which prohibits “using force, including heat, light, electricity, gas, scent or any other substance, if it is used in a way that can cause damage or discomfort.”WoW also pointed out that the chairman of the Western Wall Heritage Foundation, Rabbi Shmuel Rabinowitz, who is also the administrator of the Western Wall and holy sites, has been one of the most ardent opponents of Women of the Wall for many years.The organization argued that Western Wall Heritage Foundation attendants could not be trusted to objectively uphold the rights of WoW worshipers.In its letter to the attorney- general, WoW demanded that he instruct Halevy and police personnel at the Western Wall to protect WoW worshipers and their right to pray at the site; physically separate protesters from WoW worshipers; and eject any protesters who blow whistles, throw water, bottles or shout curses at the group from the site.In a similar incident on June 16, dozens of haredi and religious protesters surrounded a group of several hundred worshipers from the Reform and Masorti movements who were conducting a prayer rally at the Western Wall upper plaza.On several occasions, the protesters buffeted up against those praying, pushing, and generally harassing the prayer rally participants.Police personnel present at the back of the plaza declined to separate the protesters from those participating in the rally.“The Israel Police all but announced to us that, from their point of view, the Western Wall, Judaism’s most holy site, is now being treated as an extraterritorial enclave in which mob rule reigns,” said Hoffman.“The Jerusalem District chief’s statement that untrained Western Wall Foundation ushers are now responsible for our security during prayers is all but incomprehensible, given that these ushers have no legal standing.“We expect the attorney-general and the police legal counsel to ensure that our safety is protected by the police on Rosh Hodesh Elul [the new month of Elul] this coming Sunday.”