IDF general clarifies amid backlash: ‘Not my intent to liken Israel to Nazi Germany’ 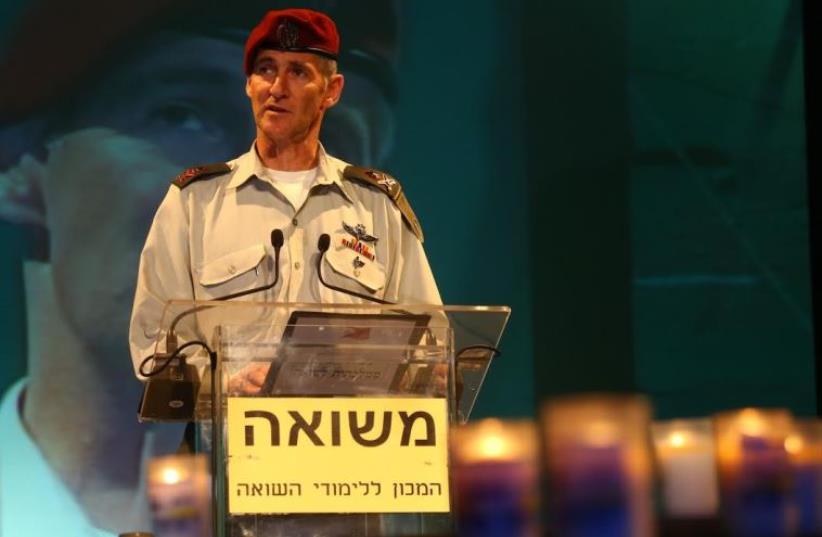 IDF Deputy Chief of Staff Maj.-Gen. Yair Golan delivers remarks at Kibbutz Tel Yitzhak
(photo credit: ASSAF SHILO / ISRAEL SUN)
Advertisement
Amid an uproar that spread through political ranks and across social media, Deputy Chief of Staff Maj.-Gen. Yair Golan clarified Wednesday that he did not compare Israel or the IDF to Nazi Germany in his remarks at a Holocaust Remembrance Day ceremony the night before.A statement released by the IDF said Golan “had no intention to compare IDF and the State of Israel to processes that took place in Germany 70 years ago. The comparison is absurd and has no basis, and I had no intention to create such parallels or criticize the political leadership. The IDF is a moral army that protects the purity of arms and human dignity.”After Golan’s clarification, Defense Minister Moshe Ya’alon said he has complete trust in Golan.“The onslaught against him and the populism toward him in light of an intentionally twisted interpretation to the things he said last night are an additional disconcerting and alarming attempt to politically harm the IDF and its officers.Shame on us if we allow this to happen,” Ya’alon said.Ya’alon added that IDF commanders, especially the senior ones, do not just lead soldiers into battle; rather, they should “outline a path and values with a compass and a conscience.”The clarification was released several hours after Prime Minister Benjamin Netanyahu spoke to Ya’alon. A source close to Netanyahu said, “With all respect for the deputy chief of staff, he made a mistake in his remarks and it is good that he clarified them.”Education Minister Naftali Bennett said of the clarification, “This is what’s right. He made a mistake, and fixed it. This isn’t the time for arguments. Let’s respect this day and be together.”However, MK Michael Oren said that the “remark by Dep. IDF chief, even if unintended, boosted BDS. Israelis must understand how our enemies hear our words and use them against us.”The night before, at a ceremony at Kibbutz Tel Yitzhak, near Netanya, Golan said: “It’s scary to see horrifying developments that took place in Europe begin to unfold here.”“The Holocaust should bring us to ponder our public lives and, furthermore, it must lead anyone who is capable of taking public responsibility to do so,” Golan said. “Because if there is one thing that is scary in remembering the Holocaust, it is noticing horrific processes which developed in Europe – particularly in Germany – 70, 80 and 90 years ago, and finding remnants of that here among us in the year 2016.”The Holocaust must provoke “deep soul-searching about the nature of man... the responsibility of leadership and the quality of our society,” Golan stated. “It must lead us to fundamentally rethink how we, here and now, behave toward the other.”The deputy chief of staff said Israelis must think about their ability to “uproot the first signs of intolerance, violence and self-destruction that arise on the path to moral degradation.”Golan also made reference to the March 24 Hebron incident in which an IDF infantryman was filmed fatally shooting a Palestinian terrorist who was on the ground and subdued.The soldier, Sgt. Elor Azaria, is being tried by a military tribunal on charges of manslaughter.The arrest and court martial have been met with fierce criticism from those who say he acted properly.“Improper use of weapons and violating the sanctity of arms have taken place since the IDF’s founding,” Golan said.“The IDF should be proud that throughout its history it has had the ability to investigate severe incidents without hesitation...We didn’t try to justify ourselves, we didn’t cover anything up, we didn’t whitewash, we didn’t make excuses, and we didn’t equivocate. Our path was – and will be – one of truth and shouldering responsibility, even if the truth is difficult and the burden of responsibility is a heavy one.“We are certain of the high level of morality in the IDF as an organization, and we do not ignore exceptions by individuals. We demand from our soldiers the same that we demand of ourselves, and we insist that upstanding behavior and setting an example for everyone become second nature for every commander,” he said.Golan’s statements was widely reported in the international press, with some outlets misquoting Golan to say he directly compared Israel to Nazis, and sparked an uproar on social media.Education Minister Naftali Bennett took to Twitter to write: “A moment before the Holocaust deniers turn these mistaken words into their flag, a moment before our soldiers will be compared to Nazis, God forbid, with approval from above, the deputy chief of staff made a mistake, and he must fix it immediately.”Opposition leader Isaac Herzog called Golan “a brave commander” and came out against “the crazy people shouting against him.”“This is what morality and responsibility sound like,” Herzog added. “We will not be scared by shouts and profanity and continue backing the IDF and its commanders, always.”