Ya'alon: Details of US defense package for Israel to be completed 'within weeks'

Defense minister hopeful on concluding details of aid package for next decade; doubts any general truce will hold up in Syria. 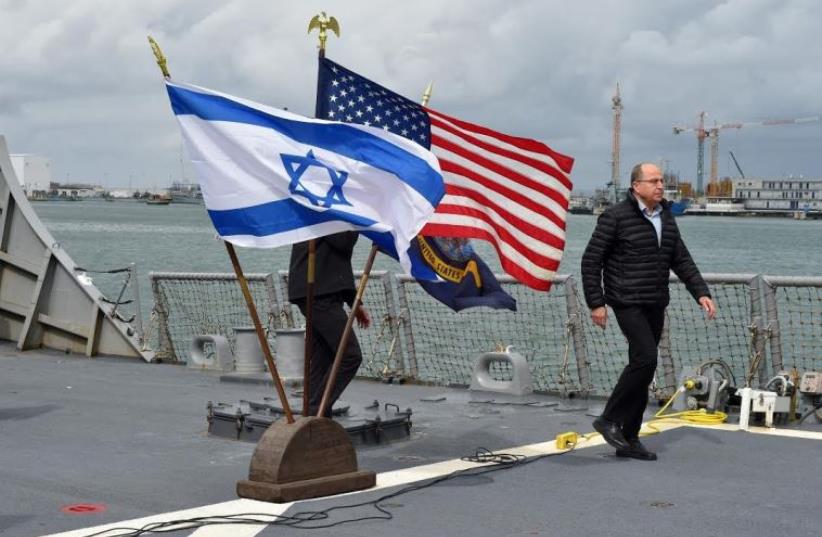 Defense Minister Moshe Ya'alon onboard the USS Carney
(photo credit: DEFENSE MINISTRY)
Advertisement
The US-Israel Memorandum of Understanding, which will set out the American defense package for Israel during the next decade, will likely be complete “in the coming weeks,” Defense Minister Moshe Ya’alon said on Monday.He spoke onboard the USS Carney, an American destroyer taking place in the Juniper Cobra 2016 joint ballistic missile defense drill at Haifa’s naval base, alongside US Ambassador Dan Shapiro.During his visit to meet with US Defense Secretary Ashton Carter in October 2015, the two “summarized the capabilities that will be available to Israel to safeguard our qualitative edge, which is so important, as well as our deterrence and contribution to regional stability.”Ya’alon expressed doubts regarding diplomatic efforts to reach a cease-fire in Syria.“It is hard for me to see, in this reality, a stable cease-fire, in which all elements agree to hold their fire. ISIS is not part of this process. Jabhat Al-Nusra is not part of the process. And the Russians say, so long as these are active, we will attack them. If one or another element within the opposite agrees on the local level to a cease-fire, that’s one thing. I do not see a general cease-fire on the horizon.”Ya’alon described the US-Israeli missile defense exercise as “another example of the very special, deep and important relations between the US, our great friend, and the State of Israel. Between the Sixth Fleet and the IDF.”The drill, in addition to helping to secure Israel, also helps regional stability, he said.“In the Middle East, everything chances. Every day, we see more people killed like yesterday in Syria, more wars between radical Islam and regimes.Between elements activated by Iran and other elements, mainly Shi’ites against Sunnis.”Israel-US defense ties contribute to regional stability, and Israel is trying to bring in other regional states to stabilizing efforts, like Greece and Cyprus, NATO, and Arab states “facing the same challenges that we are today.”