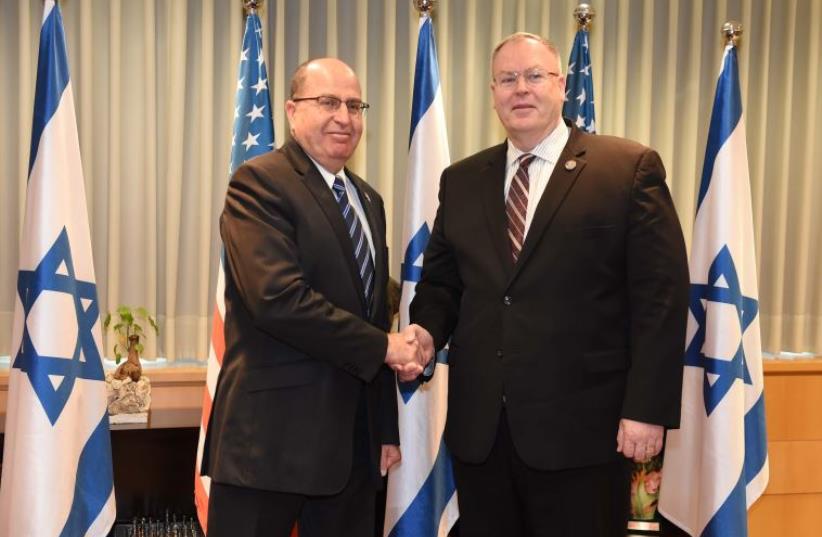 Ya'alon with US Deputy Secretary of Defense, Robert Work
(photo credit: EDEN MOLDEVSKI/DEFENSE MINISTRY)
Advertisement
Israel is facing conventional and unconventional combat challenges, which include missile and rocket threats of various ranges, Defense Minister Moshe Ya’alon said during a meeting with visiting US Deputy Secretary of Defense Rob Work in Tel Aviv on Thursday.Israel is dealing with security challenges in space, the air, the sea, the surface, and underground, underscoring the importance of technology and the need to share information and experience with the US, Ya’alon added.Ya’alon told Work that his visit is a demonstration of good relations between the two countries’ defense establishments.“We are cooperating to deal with current challenges, mainly in the Middle East, on behalf of the future of the two countries,” he said.Work said that the US always stands with Israel, adding that bilateral relations are a cornerstone of American policy and Middle East strategy.While US Secretary of Defense Ash Carter focuses mainly on policy, Work said that he himself concentrates on capabilities and that he has spent recent days discussing technological means with Israeli defense officials.Ya’alon told Israel Radio later on Thursday that relations with the US are a twoway street, adding, “With all modesty, they benefit from us and of course benefit from the capabilities of the number one power in the world.”He also told the radio station that the Iranian threat continues after the nuclear agreement with the West. “Now we must deal with the future [since] there is already a signed contract and there is still a rebellious regime in Iran.”Iran’s recent missile tests are provocations that occurred even before sanctions against it have been lifted, the defense minister said. “Not to mention supplying weapons and money to terrorist organizations, some of them near us, like Hezbollah, Hamas, and Palestinian Islamic Jihad, or further away, like the Houthis in Yemen.”Ya’alon continued, “There is still a change ahead of us, which I hope the US will continue to lead on and not give in to Iran in these areas.”Iran and the US see “some things eye to eye,” and divisions exist between Washington and Jerusalem, on issues like Syria, Ya’alon said.“We very much do not want to see Iran becoming hegemonic in Syria, as it is hegemonic today in Lebanon or in Iraq... But it seems it is easy to hold Iran as something that fights Islamic State, as part of the solution, and we still see it as a main part of the problem,” Ya’alon said.The defense minister added that from Israel’s perspective the main conflict in the Middle East is between Shi’ites and Sunnis, and that Sunni states have begun forming an Arab coalition – which Pakistan has joined – against Iran.Ya’alon described the development as “interesting,” adding, “I think the West has to be on a certain side, as we are on a certain side based from the perspective of our interests, and certainly, from the perspective of common enemies.”