Lapid lectured about Begin's leadership to students from the Tavor pre-military academy in Nazareth Ilit at the Etzel Museum in Tel Aviv. 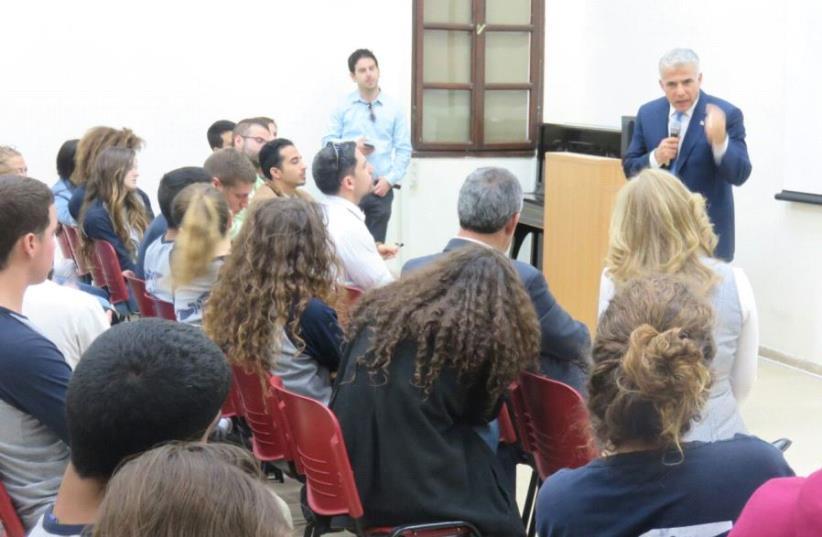 Yesh Atid leader Yair Lapid addressing Nazareth Illit students about the legacy of former Likud Prime Minister Menachem Begin
(photo credit: COURTESY YESH ATID)
Advertisement
The Yesh Atid Party continued its efforts to attract former Likud voters Monday by holding an event in memory of former Likud prime minister Menachem Begin, who died this week 25 years ago.Yesh Atid has been competing with the Likud in the polls to be the largest party in the next Knesset. A photo of Begin was recently added to the wall of the Yesh Atid faction room and party leader Yair Lapid’s office in the Knesset, alongside Israel’s first prime minister, David Ben-Gurion.Lapid lectured about Begin’s leadership to students from the Tavor pre-military academy in Nazareth Illit at the Etzel Museum in Tel Aviv. Former Likud minister Dan Meridor, who was Begin’s cabinet secretary, also spoke at the event.“True leadership is finding a way to live together,” Lapid told the students. “This is the true leadership. This is the true Judaism. And this is what it means to be an Israeli with values. This is what Begin brought to Israel.”Lapid and the students were joined on a tour of the museum by Yesh Atid MK Mickey Levy, whose parents fought in Etzel, also known as the Irgun, which Begin commanded.Irgun fighter Yoska Nahmias led the tour and spoke about his battle experience.Yesh Atid is expected to rise in polls being taken this week at the expense of the Zionist Union, following revelations of a secret deal made by Zionist Union MKs Eitan Cabel and Shelly Yacimovich. Cabel defended himself at a meeting of the Knesset Economics Committee that he chairs Monday, saying that he will go far despite those who doubted him.“I don’t intend to apologize, because I did not kill or harass anyone,” Cabel said. “I didn’t sell a submarine, and I did not choose to remain silent when being questioned under oath.”Histadrut labor federation chief Avi Nissenkorn called a press conference for Tuesday, in which he intends to criticize Cabel and Yacimovich.Kulanu announced Monday that it had obtained the endorsements of 15,000 workers to form a new faction in the Histadrut, three times more than the minimum number of endorsements required.