Yesh Atid's strategy for Israel’s security is not only military; it is based on the idea that a Jewish and democratic state. 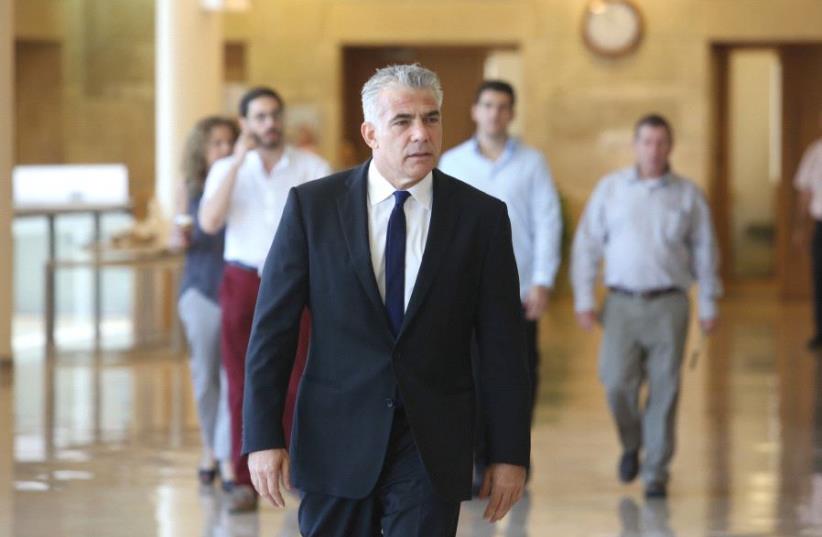 YESH ATID chairman Yair Lapid is on a mission to transform Israel’s entire political culture, aiming to pull it back to the Center.
(photo credit: MARC ISRAEL SELLEM/THE JERUSALEM POST)
Advertisement
Yesh Atid presented a security strategy for Israel at a party conference in Tel Aviv on Thursday, laying out what the party thinks should be the country’s guiding principles, while criticizing the government for not having its own overarching view.The last time Israel had an official, overarching security strategy was in 1953, drafted by then-prime minister David Ben-Gurion. Over the years, there have been calls by politicians for the government to come up with something new.Yesh Atid chairman Yair Lapid said, “The situation today is that the prime minister is avoiding shaping a national security strategy because of political concerns. The talk is about security, but the considerations are political survival.”“Between leadership and politics, the current government chose politics,” Lapid added.“In recent years, instead of there being shared responsibility, the army has had to defend itself from politicians, starting with attacks on the army from within the security cabinet during Operation Protective Edge to the Elor Azaria affair. And even [Education Minister Naftali] Bennett’s statements in recent days,” criticizing the IDF for saying it didn’t mean to kill terrorists when destroying a terrorist tunnel from Gaza.Yesh Atid took it upon itself to suggest a strategy of its own, and after a year of work, came up with an ambitious, 70-point document.The party’s strategy for Israel’s security is not only military; it is based on the idea that a Jewish and democratic state that is diverse and combines a welfare state with a market economy, as well as international alliances, are keys to a secure Israel.“Security that comes from the values of our Declaration of Independence is more efficient,” Lapid said. “Sometimes democracy limits our ability to act, but in the long term, it pays off.”“If we adopt the norms or our enemies, then we lost,” he added.The strategy document also says Israel’s relationship with the Diaspora is an important part of its security, in that Jewish communities abroad often have an influence on their governments.Therefore, they must be taken into consideration when Israel makes decisions, while at the same time, being careful not to provide fodder for dual-loyalty accusations.Other chapters deal with security more directly: a basic strategy for use of force, defending civilians, preventing terrorism, cybersecurity, and nuclear weapons.“Israel has acted according to a strategy, known informally as the ‘[Menachem] Begin Doctrine’ after the bombing of Iraq’s nuclear reactor in 1981: Israel will not allow its declared enemies, states that endanger it or regional terrorist organizations to obtain nuclear weapons.As such, Israel will be ready to use secret and open means, to openly talk about the option of a military action against nuclear projects in hostile states, and follow through,” the document reads.Yesh Atid MK Ofer Shelah spoke about the importance of such a document: “We invest our and our children’s best years in security agencies. These are the bodies that Israelis give the most legitimacy, and we spend NIS 70 billion on them each year. In order for that to bring about a safer and more confident state, we have to have an open conversation, not just between politicians and military men, but between the public and its representatives.”