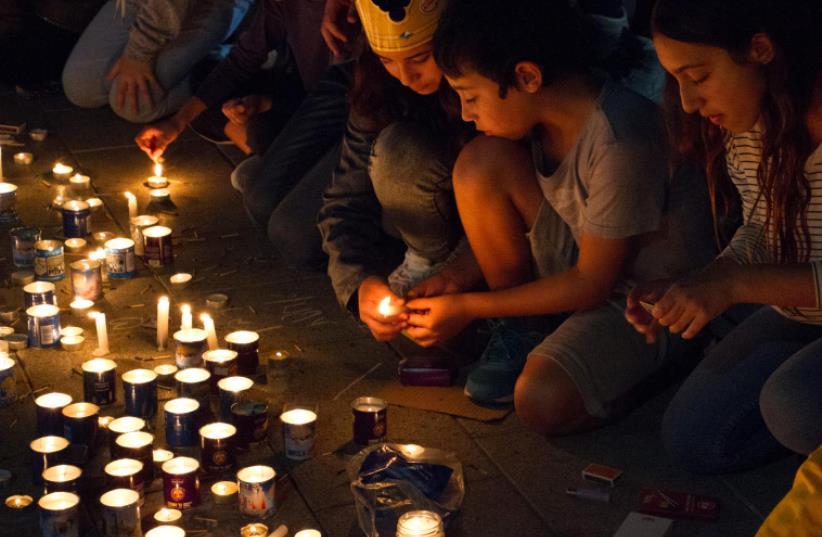 Scenes from Yitzhak Rabin memorial - November 4, 2016
(photo credit: MEREDITH HOLBROOK)
Advertisement
A new project in honor of the 25th anniversary of the assassination of former Prime Minister Yitzhak Rabin has been launched in Tel Aviv.The project, "I remember, friend," is meant to enhance the visitor experience by helping people understand the implications of Rabin's murder on Israeli society. It also makes information more accessible and relevant to all age groups. Some of the Rabin memorial was renewed to include graffiti preserved from the time of the murder. Dozens of volunteers were given training to help them be able to share their personal stories with visitors and to better interweave their narratives with events leading up to and surrounding Rabin's murder.Moreover, two short movies were produced and translated into eight languages: Hebrew, English, Arabic, French, Spanish, Russian, Mandarin Chinese and Italian. One focuses on Rabin Square itself and its symbolic meaning, while the other focuses on the effects of the murder on Israeli society. The target audience for these tours is children and teens."The murder of Yitzhak Rabin is a memory for me, but it represents distant history for our youth," said Ron Huldai, mayor of Tel Aviv-Yaffo. "Some of them sadly do not even know who Rabin was, nor his ways: love for the Land of Israel, dedication to the Zionist idea and, of course, striving for peace. It is of great importance to tell the story that unfolded on [that] November 4 to the younger generation."He added that "there is no more appropriate location for this lesson than the entrance to the municipal building – the place where an evil attacker took the law into his own hands, and influenced the course of history.""Thousands of people pass by the memorial every day – yet unfortunately, many do not even know what happened at the foot of the municipal building," said Eytan Schwartz, director of media and communications for the municipality. "This is exactly what this project is doing: informing the public that does not know the story of the murder, the rift that it created within the population and the danger that it posed to Israeli democracy. "No less important, it emphasizes the place of Tel Aviv-Yafo Municipality and the square below as fortresses of democracy in Israel," he said.