Ben-Gal fled the Nazis as a young boy and later found his purpose in the IDF, rising up the ranks to head the Seventh Armored Brigade during one of "the most difficult battles of the Yom Kippur war. 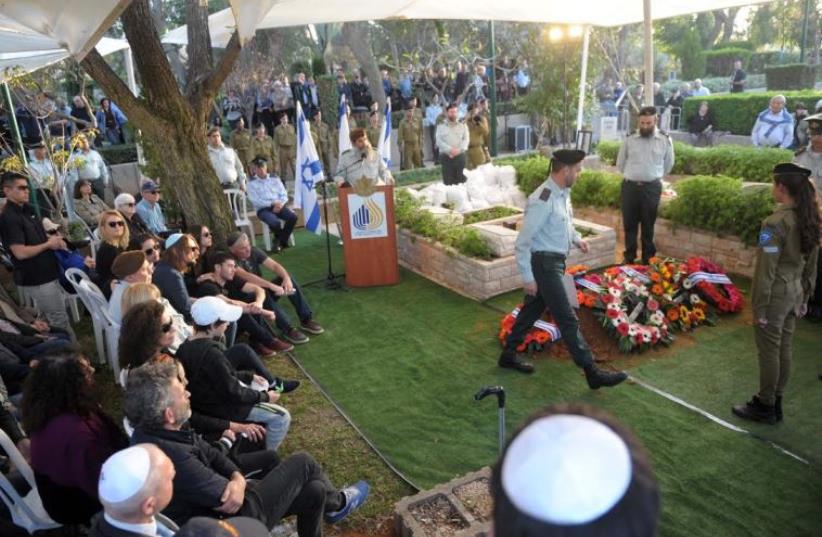 Funeral of Yom Kippur war hero Avigdor Ben-Gal
(photo credit: AVSHALOM SHOSHANI)
Advertisement
Maj.-Gen (res.) Avigdor “Yanush” Ben- Gal, a hero of the Yom Kippur war, who died on Saturday at the age of 79, was buried at the Kiryat Shaul Military Cemetery in Tel Aviv on Sunday.Throughout the day, Israeli leaders sent messages of condolences and admiration.Defense Minister Moshe Ya’alon described him as one of the commanders who shaped the IDF, Armored Corps and combat doctrines, in a way that “influenced the next generations of fighters, to this day, and will continue to do so in the future.”Ya’alon recalled how Ben-Gal, born in Lodz, Poland, in 1939, fled the Nazis with his family, and how, after his parents died in Europe, he wandered the streets of the pre-state Yishuv searching for a home. He later found his purpose in the IDF, rising in the ranks to head the Seventh Armored Brigade during one of “the most difficult and heroic battles of the Yom Kippur War. These battles helped block the Syrian army on the Golan Heights.“Yanush was at the heart of operational and command actions. He was always in the places where the most critical decisions were taken, sometimes under fire,” Ya’alon said.Former Maj.-Gen. Amram Mitzna (res.), a former mayor of Haifa and Yeroham, told Army Radio on Sunday that Ben-Gal never came to terms with the fact that he was not appointed IDF chief of staff.“He felt that he missed the central role, but mainly, I think us, his subordinates, members of the Seventh Brigade, felt that a big injustice had been done, not only to the man but to the army,” Mitzna said.Prime Minister Benjamin Netanyahu described Ben-Gal as a child Holocaust survivor from Poland who grew up to become a major-general in the IDF, who went on to save the State of Israel from Syrian invasion in the 1973 Yom Kippur War.“Alter three weeks, Yanush and his soldiers were at the gates of Damascus. I knew him as a commander of unusual spirit and calm; brave, smart, not pretentious,” he said.Ben-Gal fought alongside Netanyahu’s late brother, Yoni, “shoulder to shoulder,” the prime minister said. “The personal connection that was formed became closer with the years. Yanush suffered from a serious disease, and he showed the same quiet bravery,” Netanyahu said, adding, “May his memory be blessed.”Former president Shimon Peres described Ben-Gal as a leader and a human being who was as wise as he was brave. “His sharp intelligence conquered the hearts of his soldiers and friends.”The IDF Spokesman’s Office said that the General Staff and Chief of Staff Lt.- Gen. Gadi Eisenkot cherish Ben-Gal’s memory and share in his family’s sorrow.“The IDF salutes Maj.-Gen. (res). Avigdor “Yanush” Ben Gal for his actions, legacy, and contribution of many years to the State of Israel’s security,” the military said.Ben-Gal leaves behind a wife and seven children.