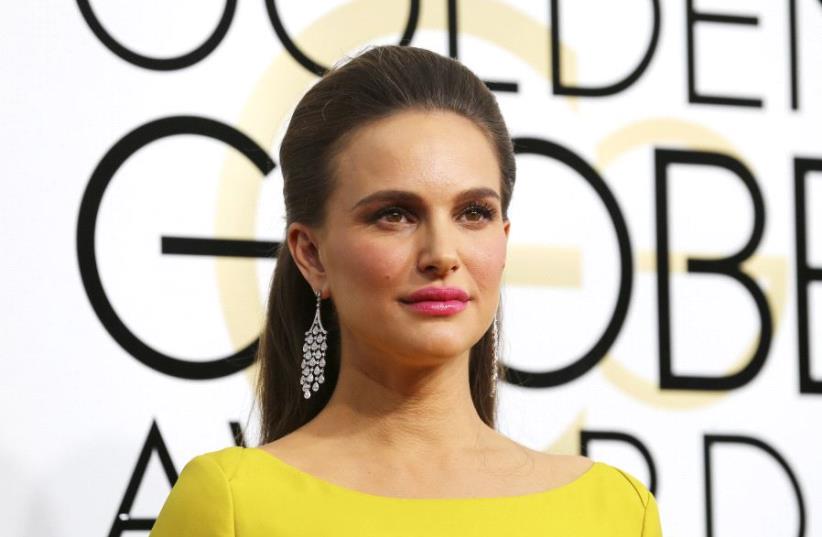 Natalie Portman at the 74th Annual Golden Globe Awards show in Beverly Hills, California, US, January 8, 2017
(photo credit: REUTERS)
Advertisement
Israeli-born American actress Natalie Portman’s decision to not come to Israel to accept the $2 million Genesis Prize “borders on ish antisemitism,” Energy Minister Yuval Steinitz, who is close to Prime Minister Benjamin Netanyahu, told Israel Radio on Sunday morning.Portman wrote on Friday that she chose not to attend because she did not want to appear as endorsing Netanyahu, who was to be giving a speech at the ceremony in June.But she also wrote that she does not support boycotting Israel and is not part of the BDS movement. She wrote that she can be critical of the leadership in Israel without wanting to boycott the entire nation.“She borders on antisemitism in how she relates to Israel,” Steinitz (Likud) said. “I blame her for cooperating with haters of Israel and antisemites. Criticism of Israel is not automatically antisemitic, but boycotting Israel has elements of antisemitism because other countries that are criticized are not boycotted so easily.”Steinitz, who will be speaking at the Jerusalem Post Conference in New York next Sunday, said Portman owes the State of Israel and the people of Israel an apology.“She wouldn’t boycott China, England, and Russia, if she opposed their policies,” he said. “If she came and expressed her opinion that there should be peace and a Palestinian state would be friendly and wouldn’t threaten Israel with missiles or terrorism, that would be her right, and I would debate her. She should have realized that the worst haters of Israel would jump in joy because she decided not to come. She gave the worst enemies of Israel ammunition.”Likud minister Gilad Erdan wrote Portman that he was disappointed with her decision and urged her to come to the country so she could learn about its policies up close. He ended the letter with a reference to Star Wars, one of her hit films.“Anakin Skywalker, a character you know well from Star Wars, went through a similar process,” Erdan wrote. “He began to believe that the Jedi knights were evil, and that the forces of the Dark Side were the defenders of democracy. I call on you not to let the Dark Side win.”Peace Now began a campaign defending Portman under the banner “I’m with her.” The campaign on social media quotes Portman in English and Hebrew, saying: “Because I care about Israel, I must stand up against violence, corruption, equality, and the abuse of power.”But National Council of Young Israel president Farley Weiss issued a statement criticizing the Genesis Foundation’s choice of Portman for the prize. In the statement, Weiss made reference to Portman marrying choreographer Benjamin Millepied, who said four years ago that he had started the process of converting to Judaism.“If the Genesis prize wanted to honor an actress they should have honored Gal Gadot, who has repeatedly shown her pride in being Israeli, supporting Israel during times of difficulties and is married to a Jewish person raising Jewish kids,” Weiss said.