By JONAH MANDEL, ABE SELIG & JPOST.COM STAFF
JUNE 18, 2010 05:30
haredi riot 311
(photo credit: Mark Neyman\GPO)
Advertisement
The High Court of Justice on Friday morning postponed the implementation of arrest warrants to Sunday for 22 mothers from Emmanuel who did not show up for their incarceration.After a day which brought weeks of tensions between Israel’s ultra-Orthodox community and the state to a climax, 35 fathers of students at the Emmanuel Beit Ya’acov girls school began two-week jail terms for contempt of court over discriminatory practices at the school, and their hassidic community hailed them as heroes for “choosing Torah” over the secular court system.RELATED
Editorial: The lost Jews
Analysis: The fight in Emmanuel
Background: Who are the Slonim Hassidim
Thousands hail Emmanuel parents for choosing ‘Torah way'
Bnei Brak protesters denounce ‘Fascist courts'
35 parents roll into Ma’asiyahu prisonOver 100,000 haredim in Jerusalem and Bnei Brak had gathered under the glaring sun earlier Thursday in a powerful show of support for the Emmanuel parents, and to voice their protest over what they perceived as the High Court’s intervention in their educational values and show of disrespect for their rabbis.A demonstration of such magnitude had not been witnessed for years, and underlined the renewed rift between the haredi community and the institutions of state over the nation’s orientation.Just after 7 p.m., two buses carrying the 35 men arrived at Jerusalem’s Russian Compound police headquarters, from where they were transported to Ma’asiyahu Prison near Ramle to begin serving their sentences. But 22 mothers and four more fathers whom the court had also sent to jail failed to present themselves and were said to have gone into hiding.On Thursday night, police said they were searching for the no-shows and would bring them to jail as soon as they were located. The court ruled to incarcerate the parents after they consistently refused to return their daughters to the state-funded Emmanuel school, which had been segregated on racial grounds. Barriers physically separating most Sephardi children from the rest of the students were ordered removed by the court, but the parents then failed to return their children. The parents have remained firm in their insistence that the separation was not racially based, but was a function of halachic stringency. A small number of Sephardi girls had been allowed to study with the Ashkenazi girls, and three Sephardi fathers were among those jailed."Prisoners sanctifying the name of heaven"Beginning just after noon on Thursday, Jerusalem police began closing off a series of the capital’s thoroughfares in anticipation of the large crowd set to turn out for the demonstration. Yermiyahu, Bar-Ilan, and Shmuel Hanavi streets were completely closed to traffic, along with Golda Meir Boulevard, Rehov Hativat Harel, Sderot Eshkol, and Shivtei Yisrael and Hanevi’im streets. Public transportation was also widely affected by the road closings, and scores of traffic police were deployed throughout the city to redirect the flow of vehicles. 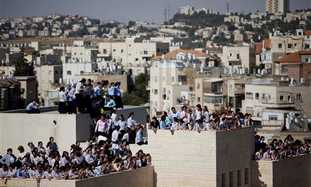 “We need to get out of our inferiority complex and be proud of being Sephardim,” Amsalem told reporters on Thursday.Amsalem has repeatedly criticized Ovadia Yosef’s rulings, most recentlywhen he suggested that converts who served in the IDF should be allowedeasier conversions and should not be forced to adopt an Orthodoxlifestyle.The Council of Torah Sages considered expelling Amsalem from theKnesset in Thursday night’s meeting, but did not reach a finalconclusion. The matter will be discussed again in an upcoming meetingof the rabbis.“The mandate in the Knesset that Amsalem received belongs to Shas, andif he defies the rabbi, he might be asked to give it back,” a Shasofficial said.The next name on the Shas list is Ethiopian rabbi and former MK Mazor Bayana.Greer Fay Cashman, Gil Hoffman and Jpost.com staff contributed to this report.
Advertisement
Subscribe for our daily newsletter