Former Shas leader, who was jailed for corruption, is making clear his intent on a political comeback. 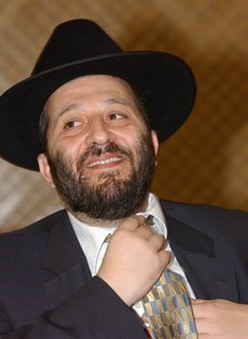 Derihas made increasingly clear in recent weeks that he intends to make apolitical comeback as soon as possible. He refused to discuss hispolitical future with reporters at the event, but he hinted hiscomeback was imminent in a recent conversation with Kadima MK ShaulMofaz.
While current Shas chairman Eli Yishai is noticeably absent onthe itinerary for next month's Herzliya Conference, Deri will be afeatured speaker at the week-long event that is addressed by thenation's top leadership. The electoral reforms Deri advocated in hisspeech on Sunday have all been repeatedly vetoed by Shas in Deri'sabsence.
Deri called for electing the prime minister in directelections, mandating that he automatically serve four years, andrequiring him to appoint professionals to each cabinet position insteadof Knesset members. He also advocated raising the electoral thresholdand electing at least half the Knesset in direct, regional elections.
"If Knesset members were chosen in regionalelections, they would know that they have to be in constant contactwith their constituents and help the average citizen," Deri said. "Thatway we would get better and more serious people in the Knesset."
Deri said the current system of government discourageslong-term planning because prime ministers would prefer to invest inshort-term plans they would get credit for finishing rather thanlong-term projects that might be cancelled by their successor. He saidthe best people don't go into politics because of the Israeli system'semphasis on parties and primaries and not on substance.
"Weare in a leadership crisis and there is a leadership vacuum, not justin Israel but in the entire world," Deri said. "Our system was rightwhen the state was founded and we were ingathering the exiles who wereafraid of disenfranchisement. But now the system prevents upgrading ourleadership in this country. A prime minister has no chance ofsucceeding with the coalition system, knowing he can fall at anyminute."
Deri also decried a lack of values among Israel'sleadership. He said the proper example of a Jewish leader was Moses,who he said was humble, patient, tolerant, and knew how to showgratitude.
Asked by reporters after his speech when he will return to thenation's leadership, Deri said, "When the time comes to decide, Iwill."
A bill has been proposed in the Knesset that would preventpeople like Deri who served jail sentences for corruption from gettingelected to the parliament.
Shas officials responded to Deri's speech by accusing him of populism.
They said he would speak differently if he were bound by the realities of representing a haredi party and its rabbis.
"The perspective from inside the political system is different,"a Shas official said. "If he was inside, he would find it correct tostick to Shas's principles."