By LAHAV HARKOV
AUGUST 17, 2010 15:18
soldier abuse 311
(photo credit: Screenshot.)
Advertisement
A day after Facebook photos of IDF reserve soldier Eden Abergil posing with detained Palestinians hit the internet, Israeli pro-Palestinian organization Breaking the Silence posted an album full of similar pictures on the social networking site on Tuesday.In a Facebook group titled "the norm that IDF spokesman Avi Benayahu denies," the organization writes: "Unsurprisingly, the IDF spokesman released a 'shocked' statement saying that this is the 'shameless and ugly behavior of one soldier.' This picture is not the ugly behavior of one person, but a norm throughout the army...that is a result of military rule over a civilian population over a long time."  Breaking the Silence collects testimonies of soldiers who served in the West Bank, that discuss cases of abuse towards Palestinians. The organization describes its goal as to "portray a different and grim picture of questionable orders in many areas regarding Palestinian civilians." 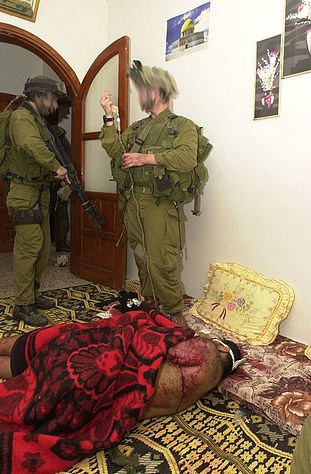 The nine photos posted in the Facebook group's album include one of a soldier lying on the floor next to a tied-up, blindfolded man. Another shows three soldiers posing next to a severely injured man who is lying on the ground. The album also includes a soldier in a greenhouse, pointing a gun at a prisoner stripped to his underwear, on the ground. Yet another photo shows soldiers posing in a Palestinian home, with a picture of the Dome of the Rock on the wall, with an injured Palestinian man lying on a carpet.Commenters criticized Breaking the Silence for posting photos that seem to be part of of soldiers' everyday routine, for example, one of a soldier loading a blindfolded Palestinian man onto an ambulance. In response, the organization wrote: "We do not need particularly violent pictures in order to reveal the apathy and passive violence. Even in this picture, where the unit decided to take care of an injured man...we see the norm of taking a picture with the spoils. We are fighting this norm."The group also has a message for Benayahu: "Do not underestimate the intelligence of the Israeli public. Clarify that this is a widespread phenomenon, and not an unusual event with one soldier."

"Taking responsibility is not blaming the lowest ranks, but dealing with the low moral situation of top commanders that are responsible for norms in the entire army," Breaking the Silence writes. 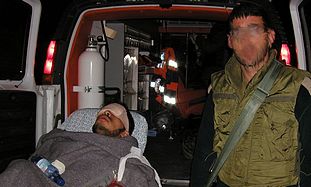