2 indicted for taking ransom from relatives of refugees who wanted to rejoin their families in Israel.

By YAAKOV LAPPIN
JANUARY 21, 2010 18:58
Advertisement
African migrants making their way along the arduous smuggling route to Israel have been kidnapped by a criminal gang operating in the Sinai Peninsula, held in prison camps, tortured, and released only after ransom money was obtained from family members in Israel, police said on Thursday following the lifting of a media ban. 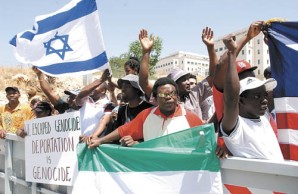 At times, the cries of pain from tortured captives were transmitted down a phone line to their horrified family members in Israel, according to police.Two Eritrean citizens were indicted at a Jerusalem District Court on Thursday for acting as ransom collectors on behalf of the gang in Sinai, which was made up of Beduin tribesmen and Eritrean nationals.The suspects, Nabsi Habati, 34, and Fatawi Aziabhir, 41, residents of Jerusalem, were arrested last week by police along with additional suspected accomplices, and have been charged with collecting ransom from family members of the mostly Eritrean and Ethiopian migrant captives.No suspects have been arrested in Egypt, and the Egyptian police have not cooperated with the Israeli police investigation, The Jerusalem Post has learned.The police's National Economic Crimes Unit, a part of the Sa'ar division of the Lahav 433 Unit, assembled a special team to lead the investigation.Police became aware of the existence of the gang last year when an
Eritrean national filed a complaint at a Lachish police station, telling police that his cousin had phoned him to say he was being held prisoner at a camp in the Sinai, and that his captors would only release him in exchange for a hefty sum of money."We learned that the man's cousin was being held by an Egyptian resident, and that an Eritrean by the name of Nabsi Habati is the ransom collection man in Israel," police said in a statement. "We also learned that the money was transferred to criminal elements in Egypt via an Ethiopian national residing in Israel called Fitawi Mahari. We tracked down Habati in Jerusalem, but we chose not to arrest him at this stage to allow the investigation to proceed," police added.Across the border in Egypt, members of the Rashida Beduin tribe were holding the migrants hostage in prison camps, where the captives were held in inhumane conditions and tortured with electric shocks and beatings, police said.The victims were transported from one holding camp to another in fuel containers, and were refused water and food while being moved.The indictment sheet drew a grim picture of the prison camps, saying armed guards stood watch over the migrants who had their hands and feet bound, as they were subjected to electric shocks and beatings with metal bars.The captives' skin was scarred with burning metal, the indictment sheet added. Meanwhile, gang members in Israel were busy locating the family members of captives.The indictment sheet details the treacherous journey of one Eritrean woman, Wizar Tasapai, who left her homeland last year for Israel, and was kidnapped in Sudan. When her kidnappers realized Tapasai's relatives in Eritrea were unable to pay a ransom, she was sold to other captors.Tapasai was transported to Sinai while hidden in a fuel tank, with her hands tied behind her back and deprived of food and water. She arrived at a Sinai prison camp in December 2009, and was told by her captors that her kidneys would be sold if they did not receive USD 2,800.Tasapai's cousin, Okabai Hagus Mesho, was located by Habati in Tel Aviv. "The girl is in a bad condition. She is beaten and raped," Habati is alleged to have told Mesho, before demanding a ransom.Habati and Mesho allegedly met at the Central Tel Aviv bus station inNovember last year, and USD 2,150 was allegedly collected by Habati inransom. Habati kept USD 150 as commission, the charge sheet said, andtransferred the remainder to his accomplices in Egypt.After the money was received, the gang members in Israel would call thecaptive holders in Egypt to instruct them to release the migrants andhelp them enter Israel.Wizar Tasapai illegally crossed into Israel on December 16.A second police complaint detailing kidnapping and ransom demands was filed by an Ethiopian migrant last month.Police have also learned of another ransom payment middleman, anEritrean national known as Muhammad Ibrahim. Ibrahim was lured into apolice trap with a promise of ransom, and arrested in Tel Aviv.Police seized USD 50,000 from his home.Police then moved to arrest Nagasi and Mahari, and seized USD 100,000 in a raid on their apartment.
Advertisement
Subscribe for our daily newsletter