Snow in Golan Heights, but not in J’lem

By JPOST.COM STAFF
FEBRUARY 4, 2010 08:54
snow sun tree 311
(photo credit: AP)
Advertisement
Heavy snow was falling on Mount Hermon and on the higher areas in the Upper Galilee and Golan Heights on Thursday, while rain, hailstorms and strong winds were felt from Israel's North to the Negev.Rain caused flooding in the Dead Sea area, and the Ze'elim Bridge was closed down. Route 90 was closed to traffic from the Dead Sea hotels to the North due to a flood in Nahal Hever. 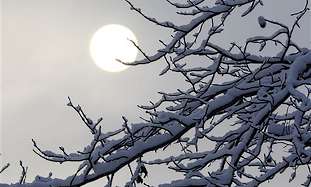 School was canceled in the northern Golan regional Avital school, and several roads, including Routes 91 and 89,  were closed to traffic due to the snow.Some 50 centimeters of snow were measured at the lower cable-car area at Mt. Hermon on Thursday afternoon.Minor snowfall was reported in Jerusalem as well, but the snow did not pile up and schools in the captial opened as usual on Thursday morning.Jerusalem Municipality teams with snow plows, bulldozers and salts bagswere prepared to open major traffic routes in case the stormintensified later Thursday morning.Under instructions byJerusalem Mayor Nir Barkat, the municipality contacted homeless peoplein the capital on Wednesday evening and transferred them to hotels.Welfareservices in the city contacted elderly people and social workers wereexpected to deliver hot meals to elderly people who could not leavetheir homes due to the cold weather.
Advertisement
Subscribe for our daily newsletter