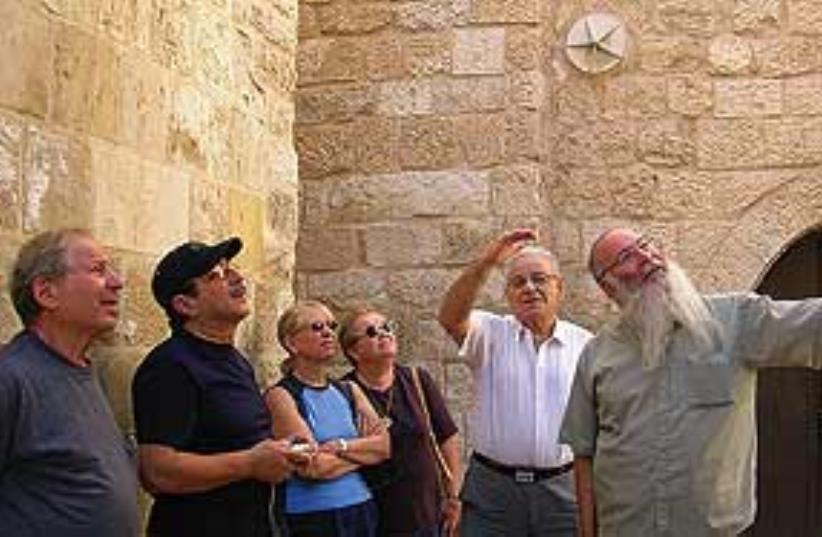 old city home311
(photo credit: Courtesy)
Advertisement
A Turkish governmental agency that sponsors development projects throughout Africa, Asia and Europe recently began building a 3-meter-high retaining wall around an outlying section of the capital’s Old City, the municipality confirmed on Wednesday.The large stone wall, which has sprung up rapidly along the outer perimeter of the Yeusefiya Cemetery – just outside the Lions’ Gate entrance to the Muslim Quarter – is apparently a second retaining wall for the old Islamic burial ground, which is part of the larger Bab al-Rahmah Cemetery that lines the eastern wall of the Temple Mount and is believed to have tombs dating back around 1,400 years.As part of the project, a plaque with a red and white Turkish flag is visible on a recently completed section of the wall, near the entrance to the Lions’ Gate from Jericho Road.But the project, which seems redundant as the cemetery’s original retaining wall is still intact, has given passersby a reason to pause, as two large signs, with both English and Turkish writing on them, declare quite clearly that the project is being undertaken by TIKA, Turkey’s International Cooperation and Development Agency.Foreign funding for similar projects in the capital is not uncommon. However, with Turkish-Israel relations at an all-time low, the sudden involvement in Jerusalem construction can be a sensitive issue.Reached on Wednesday, a spokeswoman at TIKA’s office in Ankara declined to comment on the construction and instead redirected the call to “TIKA’s office in Palestine” – i.e., the Turkish Consulate in the east Jerusalem neighborhood of Sheikh Jarrah.Numerous calls to the consulate went unanswered.Nonetheless, the municipality confirmed that the project was being undertaken with its full knowledge, and “according to the building permits that were issued for the project – which were requested as per the law.”Furthermore, the municipality’s stated, “there is a need for the heightening of the wall, in order to prevent rocks from falling down onto the sidewalk and hurting pedestrians.”Some were skeptical, including Israel Land Fund founder and long-time Jerusalem activist Aryeh King, who told The Jerusalem Post that he believed the project to be illegal, and said it was only allowed to move forward “due to political considerations.”

“I know for a fact that various authorities, including the Israel Antiquities Authority, were against this project from the beginning, but it was allowed to go ahead anyway,” King said.“It obvious to me that this is no coincidence, and that the Turkish government is trying to take unilateral steps and show that they can do whatever they want in Jerusalem – and at an entrance to the Old City no less,” he said.“But I’m going to give this one more week, and if the project is still going on, I plan on taking this matter to the courts. I want to see this work stopped, and that’s all there is to it,” King said.
Advertisement
Subscribe for our daily newsletter