Time to get slimed - again - as Ghostbusters: New trailer released

The Ghostbusters franchise will be back this summer, retooled for the digital age. 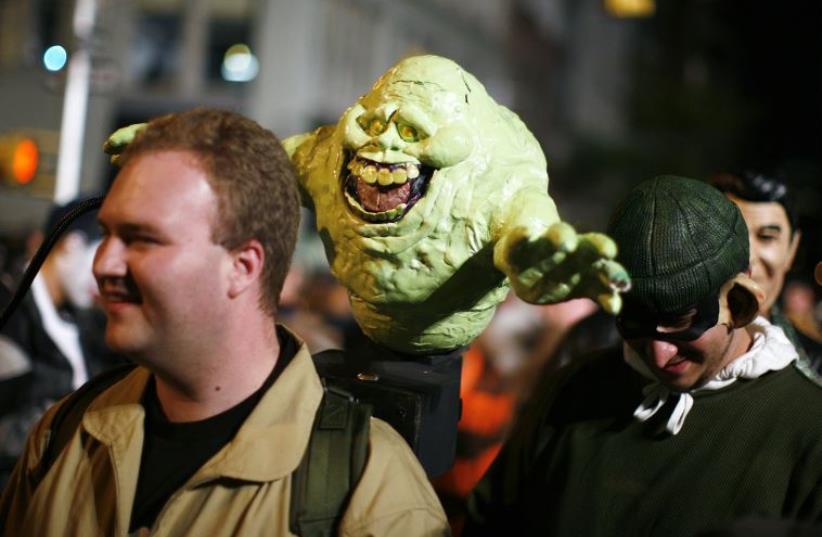 A participant dressed as a character from the show "Ghostbusters" takes part in the annual Greenwich Village Halloween Parade in New York
(photo credit: REUTERS)
Advertisement
Who ya gonna text? That’s right, the Ghostbusters franchise will be back this summer, retooled for the digital age, and a just-released trailer for Ghostbusters: Afterlife has Ghostbuster-ologists working overtime to figure out clues about the movie. This latest film was directed by Jason Reitman, who is the son of the Ivan Reitman, the director of the original, which makes him solidly a part of Hollywood’s Jewish-Canadian royalty.”

Forget the almost universally panned female-centric 2016 reboot. This upcoming film looks to be sticking close to the spirit of the 1984 cult classic. It focuses on a single mom (Carrie Coon), who is broke, and who moves her children, Trevor (Finn Wolfhard, the star of Stranger Things and so no stranger to supernatural phenomena, who has said he is half-Jewish on his mother’s side) and Phoebe (Mckenna Grace), into a dilapidated house in Oklahoma, which she has inherited from their grandfather.A lot of strange things start happening all over town, not surprising in a film in this franchise, and it’s revealed that the children’s grandfather was Dr. Egon Spengler (Harold Ramis, from the original 1984 film, who passed away five years ago). Phoebe discovers Spengler’s Ghostbuster uniform hanging neatly in a closet and a ghost trap under the floorboards, while Trevor finds the Ecto-1 Cadillac, which took the Ghostbusters all over New York, in a barn and gets it running again. Paul Rudd, as their science teacher, explains the Ghostbusters legacy to them -- and that the town is shaking, while it is nowhere near a fault line, although there hasn’t been a ghost sighting in 30 years, “But New York in the ‘80s? It was like The Walking Dead” - while they take off after a shimmering, bluish slimy thing. Bill Murray, Dan Aykroyd and Ernie Hudson, the surviving heroes, are credited in the film, as are Annie Potts, who played their perpetually blasé secretary, Janine, and Sigourney Weaver, who was a violinist who got possessed by a ghost and stole Murray’s heart.The social media response to this trailer has been overwhelmingly positive, and there are enough references to the first film and clues about this one to keep fans busy until the next trailer is released.