A battle of intelligence, operations and narratives

An analysis of the Iranian UAV incident and its ramifications. 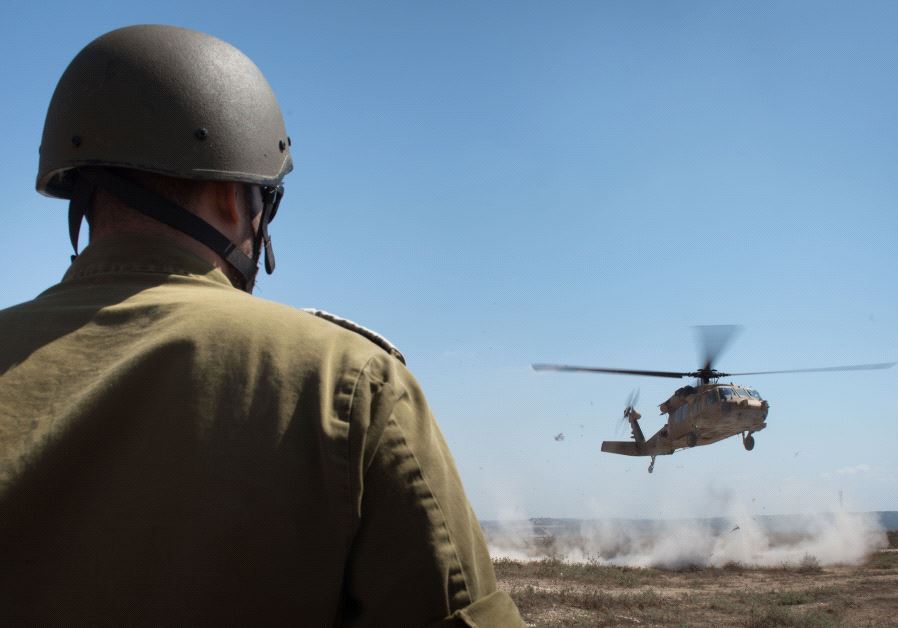 A soldier watches a drill with a Blackhawk helicopter, July 2017/ IDF SPOKESPERSON'S UNIT Some have made the argument that overall, moneywise, it wasn’t worth losing an F-16. Well, this kind of cost-effectiveness calculation is fundamentally flawed. Israel’s goal is to sustain and protect our homeland and Israeli citizens and residents, as our sovereignty and very existence are constantly questioned and challenged. If this was merely about financial efficiency, or prosperity, we could have moved to Canada or Denmark. By the way, each improvised rocket fired by terrorists, costs several hundred dollars, and is shot down by an advanced interceptor, which costs tens of thousands of dollars. Defense is always more expensive than offense, as you must carry out broad activities against an unknown, random threat.We are in fact engaged in a prolonged campaign of various intensities, from what we call “routine security” to all-out war. In recent years, the “campaign between wars” has become a key factor in promoting Israeli interests, mainly by thwarting emerging threats. Of course we dream of peace, strive to prolong periods of “calm” and promote stability, but “quiet” is certainly not our ultimate goal – at least not a temporary lull, which can be exploited for building dangerous capabilities.
THE IRAN-ISRAEL confrontation is now transitioning to a new phase. After years of exchanging blows by proxies and activating covert and clandestine means, an overt and direct engagement is now materializing.Many in Israel are skeptical of our ability to truly influence the Iranian footprint in Syria, but I believe there’s much more going on than meets the eye. Israel has been working closely with allies in the diplomatic arena, and making very clear and decisive moves on the ground, demonstrating what the red lines are and the ramifications of crossing them.Of course, there is a limit to our influence, and our leadership must make tough decisions, but we are certainly influential, not only consequential. It is impossible to assess what Iran’s presence would have been if it were not for Israel’s actions. We should stay the course and deny Iran’s foothold, as well as continue to sever channels used to supply Hezbollah with strategic, balance- tipping weapons.The UAV incident was not a singular event but a milestone in a spiral towards war. Most analysts assess that Israel’s strategic situation has never been better – as far as regional opportunities, military might, technological dominance, and international allies. Still, a positive strategic posture does not necessarily mean peace and quiet.Currently the actors have no interest to escalate to an all-out war with Israel. Syria, Hezbollah and Iran have too much to lose. Russian interests would not be served by war, and they are the ones calling the shots. So at least in the short run, the UAV incident falls into the category of “day of battle.” But a miscalculation may always trigger broader ramifications than intended, including war.Even if such battle days eventually lead to war, we must not wallow in thoughts of an existential nature. The next war will certainly be devastating, and the Israeli homefront will sustain an unprecedented barrage of rockets and missiles. But I believe that Israelis will pull through and demonstrate resilience. The State of Israel does not face an existential threat, which may only materialize if Iran ever acquires nuclear weapons. This is why we must do whatever it takes to deny them such capabilities.Israel’s technological supremacy is stupefying, with a range of capabilities kept at bay and saved for a “doomsday” scenario. Although I dislike haughty threats by Israeli politicians, our enemies had best internalize that they are not bluffing.With all this talk of technology and weapons, it’s important to remember that the main confrontation is currently a battle of narratives, symbols and stamina.As events unfolded on Saturday, February 10, thousands of Israelis and tourists did not alter their plans, and enjoyed a beautiful sunny day in the Galilee, on the Golan Heights and Mount Hermon. For me, this was the most significant response.
The writer is a cross-cultural strategist, and a former pilot in the Israel Air Force.
www.ccst.co.il
Advertisement
Subscribe for our daily newsletter