How Israel managed to overcome its misreading of Syrian and Egyptian intentions and score a lightning victory over the combined Arab armies in the Six Day War. 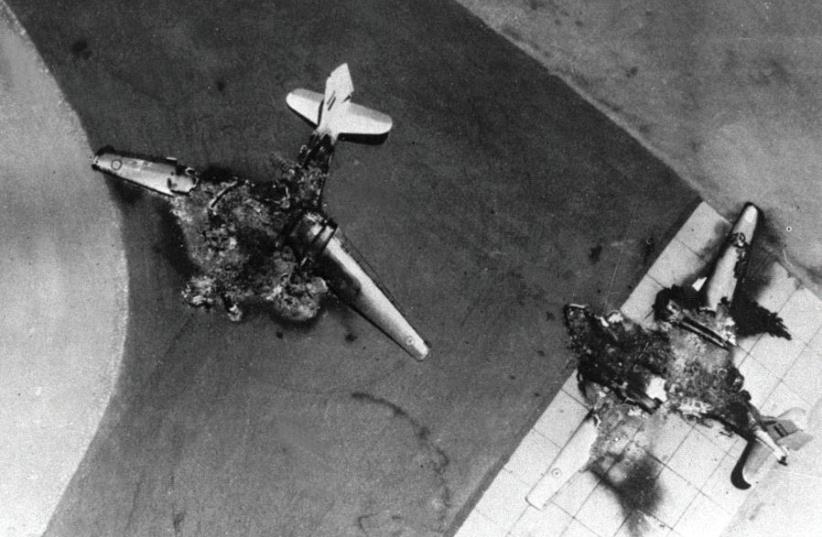 With the help of double agents, Israel tricked the Egyptians into expecting an assault from the ground. When Israel began with a massive air attack instead, Egyptian planes were sitting ducks
(photo credit: REUTERS)
Advertisement
FIFTY YEARS ago, Israel embarked on what would be called the “waiting period” – three weeks of nerves on edge that led to the Six Day War in June 1967. During that period, Egypt concentrated its army along the Israeli border, closed navigation lanes to the Red Sea port of Eilat and threatened to destroy the Jewish state.It was a war neither side had wanted and it resulted in the capture by Israeli troops of the West Bank of Jordan, the Golan Heights in Syria and the Sinai Peninsula and Gaza Strip of Egypt.Israeli intelligence was initially caught by surprise.

On May 8, 1967, the chief of military intelligence Maj.-Gen. Aaron (Ahrale) Yariv briefed the general staff and said, “We can ascertain that Egypt is not ready to be entangled in anything because of the Syrians… We have reliable and solid information that proves both Egypt and Russia are trying to restrain the Syrians.”Until then, the prevailing estimate was that Egypt might send its planes to bomb the nuclear reactor in Dimona where, according to foreign reports, Israel already had developed its first nuclear bomb.How wrong Yariv was. One month later, Israel preempted and launched a war precisely because Egypt, led by president Gamal Abdul Nasser, rushed to support Syria and neither Nasser nor Russia tried to restrain the Syrians.Yariv would be haunted for years by his errant analysis, but in the end Israel’s military victory in the war was achieved thanks to strong intelligence gathering and analysis, as well as deception operations counterintelligence unit of Israel’s domestic security agency, the Shin Bet. Rifaat was threatened with life imprisonment unless he confessed and agreed to cooperate. He did and became a double agent.“Stake” was cultivated by his Israeli handlers to develop his cover story as a top spy who had managed to befriend and penetrate the Israeli defense system. To empower this image, he was introduced to and photographed in the company of Israeli leaders including Gen. Moshe Dayan, the future defense minister, creating the impression that he was a quality asset.For the next 12 years, he fed his Egyptian “operators” false and deceptive information provided by his Israeli handlers. The jewel in the crown was in 1965 when he sent Egypt the “true Israel war plans,” which claimed that if and when there was a war between the two nations, the Israeli assault would begin with a massive ground attack. According to this false plan, the role of the air force would be defensive, to provide air support to the ground forces and repel enemy air attacks.It was a huge lie. The real Israeli war plan, code-named “Moked” (Focus), was based on surprise air strikes aiming to destroy Egypt’s air force and airfields.Following the victory there was no need for his services, and two years after the war, “Stake” ended his relationship with Israeli intelligence. He was paid handsomely, rehabilitated as a businessman in the oil sector and moved to Germany to live with his German wife. In the early 80s he returned to his Egyptian homeland, where he died.To this day, Egyptian authorities hail him as a hero, as one of their best spies ever, refusing to accept the truth that he had betrayed them and was a double agent.TRUSTING THEIR “quality” agent, the Egyptians were off guard. On the morning of June 5, when Israel launched its preemptive strike, hundreds of its fighter planes and bombers were unleashed and within 80 minutes destroyed most of the Egyptian air force, whose planes were sitting ducks unconcealed on their tarmacs. The airfields, air radars and air bases also were either completely destroyed or damaged. The Six Day War was practically over. Only then did the Israeli ground forces move in, and within six days they defeated the Egyptian army, conquering the entire Sinai and Gaza Strip.At the same time, after the Jordanian army opened fire, Israel Defense Forces overran the West Bank, including Jerusalem. On the last day of the war, Israel also captured the Golan Heights from Syria.In due course, Israel withdrew from Sinai, returning it to Egypt in exchange for a peace treaty, and from Gaza, disengaging unilaterally from the Strip.Fifty years after the war, Israel is still in full control of the West Bank and Golan Heights with no serious intention of giving either territory back, not even in return for peace treaties with the Palestinian Authority and whatever is left of the country formerly known as Syria.Israeli society, meanwhile, continues to debate whether the Six Day War was a blessing or a curse.Yossi Melman is an Israeli security commentator and co-author of ‘Spies Against Armageddon.’ He blogs at www.israelspy. com and tweets @yossi_melman