The word of a woman

Whatever role history will play in her future life, there is a part of the bat mitzva girl that intuits the horizons that her community has opened or closed for her. 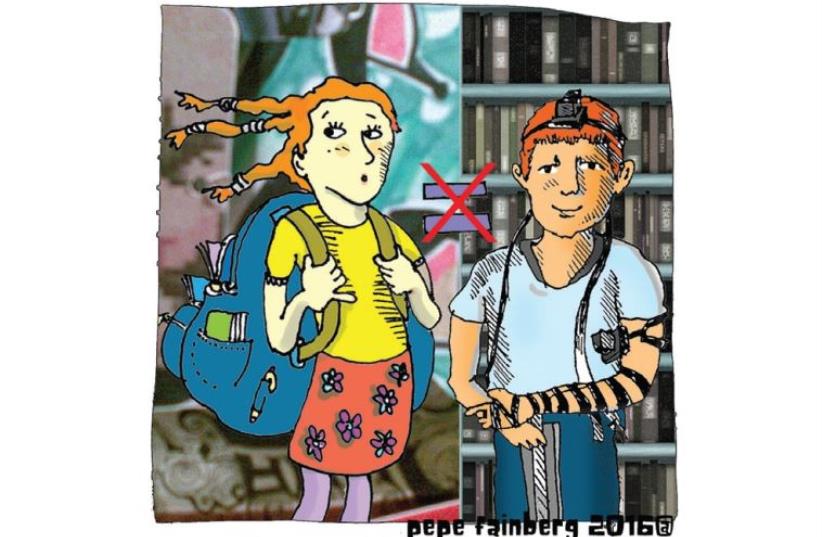 Art by Pepe Fainberg
(photo credit: PEPE FAINBERG)
Advertisement
THE BAT mitzva ceremony is a late addition to Jewish custom. For most of Jewish history, it was unheard of, and when Orthodox and Conservative authorities accepted the idea, it was with ambivalence. Even today, when it is generally agreed that something should be done to mark a girl’s entry into Jewish adulthood, the details of that something are far from agreed upon.Should a girl, like her male counterparts, be given a singular spotlight, or is it sufficient to celebrate the occasion as part of a group of girls, as my mother did in 1952? Should she read from the Torah, or merely from the accompanying prophetic portion, as I did? Or should she not be allowed on the bima, instead preparing a sermon, forgoing physical contact with the holy text? And if a community is to acknowledge a girl’s coming of age, who should take part? The entire community? Just the women? Mainly the family? Until the 20th century, Judaism felt no need to mark a girl’s coming of age at all.

Judaism’s attitudes toward and relationship to women is the most troubling Jewish issue of our time. It’s not too difficult to leave or assimilate out of a religion that unapologetically privileges its male members. In Israel, where I live, the issue claims a place in the newspapers every day. Its questions are raw, burning places of pain, insult, humiliation and shaming. Bus drivers, school principals, the police, local councils, the courts and the Knesset are all pulled into the raging debates, forced to become arbitrators on the nature of Judaism in the Jewish state. Jewish visitors to the country are appalled at how violently their religion has changed into something weirdly at odds with such values as humanism, liberalism, pluralism, and tolerance.The roots of Jewish laws and practices, which allot women a limited and rigidly defined range of mitzvah observance, were first set down in the Five Books of Moses. Centuries later, the thinkers of the Mishna and Gemara integrated and codified this exclusion into dogma. Needless to say, there are virtually no women commentators in these texts. Women are not even consulted. But then again, according to parashat Matot, the word of a woman is not worth much.“When a man voweth a vow unto the Lord, or sweareth an oath to bind his soul with a bond, he shall not break his word; he shall do according to all that proceedeth out of his mouth” (Num. 42:3). This rather obvious notion would not merit a mention, except as a contrast to what happens when a woman makes a vow or swears an oath.Because a woman’s agency, in the logic of the age, was always contingent on a man, be it her father or her husband (unless she was widowed or divorced – these misfortunes gave a woman the right to speak for herself). If the woman’s father “disallow her in the day that he heareth, none of her vows, or of her bonds wherewith she hath bound her soul shall stand”; (Num. 42:6). The text describing what happens if a woman’s husband “disallows” his wife’s vow or bond is almost identical.There is little one can say to such rulings. Either the spirit of one’s religion bestows on one’s words meaning and consequence, or it doesn’t. And if it doesn’t, then one finds oneself relegated to a lesser subset of humanity. You can talk as much as you like but you’ll never be taken seriously.A 12-year-old girl may not be able to fully comprehend, or even appreciate, the depth and breadth of the legacy she is being welcomed into, or be versed in the history of the generations who bequeathed it to her. But whatever role that history and legacy will play in her future life, there is a part of her that intuits the horizons that her community has opened or closed for her, and the vision it holds.Whether it is a vision of agency to fully realize her potential in the world, or one of curtailment and diminishment, it will leave an indelible mark on her understanding of herself. And one day, perhaps many years later, when she is in fact an adult, she will still sense, beneath all the layers of her identity, the eyes of that community upon her, their gaze telling her who she is and what might be the full worth of her words.

Janice Weizman is a novelist living in Israel.